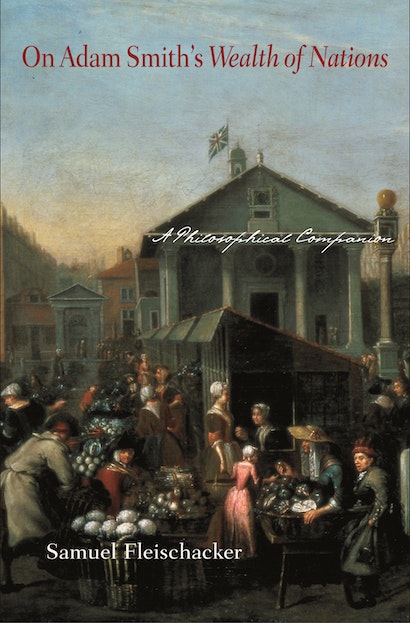 Adam Smith was a philosopher before he ever wrote about economics, yet until now there has never been a philosophical commentary on the Wealth of Nations. Samuel Fleischacker suggests that Smith’s vastly influential treatise on economics can be better understood if placed in the light of his epistemology, philosophy of science, and moral theory. He lays out the relevance of these aspects of Smith’s thought to specific themes in the Wealth of Nations, arguing, among other things, that Smith regards social science as an extension of common sense rather than as a discipline to be approached mathematically, that he has moral as well as pragmatic reasons for approving of capitalism, and that he has an unusually strong belief in human equality that leads him to anticipate, if not quite endorse, the modern doctrine of distributive justice.


Fleischacker also places Smith’s views in relation to the work of his contemporaries, especially his teacher Francis Hutcheson and friend David Hume, and draws out consequences of Smith’s thought for present-day political and philosophical debates. The Companion is divided into five general sections, which can be read independently of one another. It contains an index that points to commentary on specific passages in Wealth of Nations. Written in an approachable style befitting Smith’s own clear yet finely honed rhetoric, it is intended for professional philosophers and political economists as well as those coming to Smith for the first time.

Samuel Fleischacker is Professor of Philosophy at the University of Illinois, Chicago. His books include A Short History of Distributive

"In my opinion, all readers interested in Adam Smith's project and/or the modern Post-Smithian notion of distributive justice, should have access to this book, so they can study this important, provocative contribution to the understanding of Smith's conception of justice."—Spencer J. Pack, EH.NET

"[A]n enlightening guide to the philosophical component of the Wealth of Nations and its relation to Smith's other works. [This] is . . . an exceptionally good book."—D. D. Raphael, British Journal for the History of Philosophy

"Fleischacker . . . has a sure philosophical grasp of Smith's ideas. He uses this to great effect, presenting what is the first rigorous philosophical commentary on the Wealth of Nations in English, of which I am aware."—Duncan Kelly, Political Studies Review

"Overall, this is a very useful book whether treated as a companion or, better, read straight through."—John Douglas Bishop, Philosophy in Review

"On Adam Smith's Wealth of Nations reflects its author's long and reflective engagement with Smith's thought. There is much in the book that readers of Smith will find useful and indeed indispensable. Many of Smith's perspectives are reformulated with exemplary clarity; key puzzles in his oeuvre are puzzled out more successfully than by past commentators; and many a scholarly misinterpretation is set aright. Moreover, Fleischacker's emphasis on Smith's egalitarianism will prove controversial, and should stimulate discussion about what Smith meant in his own day and what he might mean to us."—Jerry Z. Muller, Catholic University of America

"Until now, nobody has published a truly philosophical, let alone comprehensive and philosophical, commentary on Smith's great work of political economy. This beautifully written book fills this important niche. Samuel Fleischacker is a gifted writer; he often finds just the right turn of phrase, and the right combination of technical prose and informal tone, to communicate his point with maximum effectiveness."—Charles L. Griswold, Jr., Professor of Philosophy at Boston University and author of Adam Smith and the Virtues of the Enlightenment