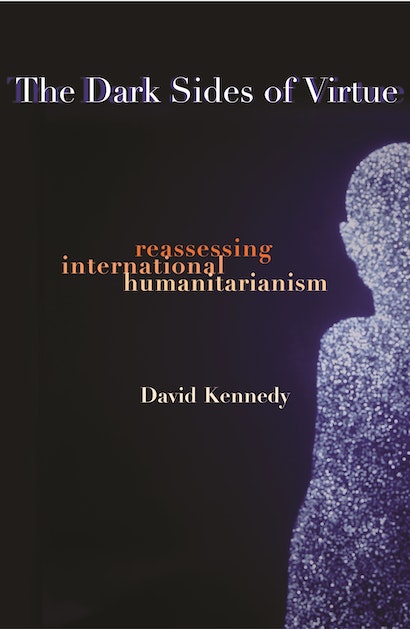 In this provocative and timely book, David Kennedy explores what can go awry when we put our humanitarian yearnings into action on a global scale — and what we can do in response.


Rooted in Kennedy’s own experience in numerous humanitarian efforts, the book examines campaigns for human rights, refugee protection, economic development, and for humanitarian limits to the conduct of war. It takes us from the jails of Uruguay to the corridors of the United Nations, from the founding of a non-governmental organization dedicated to the liberation of East Timor to work aboard an aircraft carrier in the Persian Gulf.


Kennedy shares the satisfactions of international humanitarian engagement — but also the disappointments of a faith betrayed. With humanitarianism’s new power comes knowledge that even the most well-intentioned projects can create as many problems as they solve. Kennedy develops a checklist of the unforeseen consequences, blind spots, and biases of humanitarian work — from focusing too much on rules and too little on results to the ambiguities of waging war in the name of human rights. He explores the mix of altruism, self-doubt, self-congratulation, and simple disorientation that accompany efforts to bring humanitarian commitments to foreign settings.


Writing for all those who wish that “globalization” could be more humane, Kennedy urges us to think and work more pragmatically.


A work of unusual verve, honesty, and insight, this insider’s account urges us to embrace the freedom and the responsibility that come with a deeper awareness of the dark sides of humanitarian governance.

"David Kennedy's new book reflects on the misunderstandings and mistakes that sometimes lurk amidst the work and results of well-intentioned people who are trying to make the world a better place. . . . This is a disheartening but essential book."—Donald W. Jackson, The Law and Politics Book Review

"Important and timely. . . . The most systematic and attentive treatment of the problems that arise when ideas of humanitarian professionalism contradict the real needs of people in distress."—Eric A. Heinze, Perspectives in Political Science

"This is an interesting and important book. . . . [W]hat Kennedy does do well is to argue that the humanitarian community has by and large failed to confront the reality of bad consequences flowing from good intentions."—Ramesh Thakur, Japanese Journal of Political Science

"David Kennedy . . . has written in this work a provocative analysis of those who would better the lives of individuals through action in international relations. . . . Kennedy is always stimulating and well worth reading."—David P. Forsythe, The American Journal of International Law

"There is a sort of almost spiritually liberating quality in [Kennedy's] relentless self-examination, in his search for a meta-shift of focus for the discipline, in his search for new boundaries to trespass beyond what can be concretely said. . . . Kennedy's call for a pragmatic and responsible humanitarian self-empowerment can appeal to many."—Ignacio de la Rasilla del Moral, European Journal of International Law

"David Kennedy's challenging and thought provoking arguments should be read, considered, and internalized by all activists and policy makers in international humanitarianism."—Mary Robinson, former U.N. High Commissioner for Human Rights and former President of Ireland

"Here, finally, a practical guide for the world's idealists. David Kennedy reveals international human rights as a noble cause easily perverted when ideals substitute for thought. He wisely asks advocates and policy makers to look at the real needs of real people in real distress, and avoid the seduction of lofty aspiration. A wise and sobering look at a field in particular need of wisdom and sobriety."—Robert B. Reich, University Professor of Social and Economic Policy, Brandeis University, and former U.S. Secretary of Labor.

"The portrayal of military life aboard the Independence and the decision-making calculus resident in the naval warfare realm are described with uncanny accuracy."—Commander Dale Stephens, Royal Australian Navy

"Kennedy's original insights come out of his attention to the way personal alliances and ideas of professionalism intersect and often contradict humanitarian commitments. This book is a distinctive and original contribution in which Kennedy's bold iconoclastic voice is given full rein."—Hilary Charlesworth, Australian National University

"Kennedy's work is sometimes disturbing—even shattering—but always enlightening and ultimately liberating. This is the deepest, most challenging, and effective collection of essays on international and humanitarian activism available today."—Martti Koskenniemi, Professor of International Law, Helsinki University