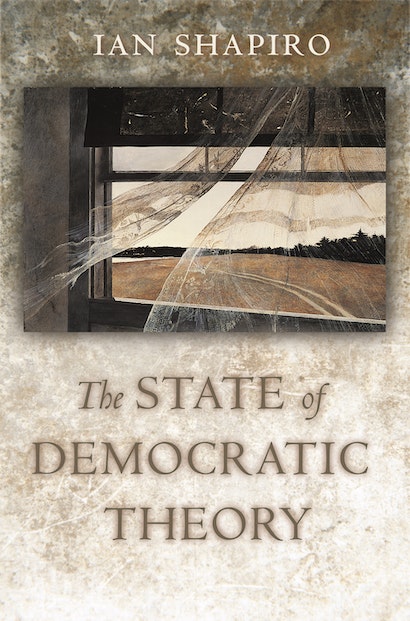 What should we expect from democracy, and how likely is it that democracies will live up to those expectations? In The State of Democratic Theory, Ian Shapiro offers a critical assessment of contemporary answers to these questions, lays out his distinctive alternative, and explores its implications for policy and political action.


Some accounts of democracy’s purposes focus on aggregating preferences; others deal with collective deliberation in search of the common good. Shapiro reveals the shortcomings of both, arguing instead that democracy should be geared toward minimizing domination throughout society. He contends that Joseph Schumpeter’s classic defense of competitive democracy is a useful starting point for achieving this purpose, but that it stands in need of radical supplementation — both with respect to its operation in national political institutions and in its extension to other forms of collective association. Shapiro’s unusually wide-ranging discussion also deals with the conditions that make democracy’s survival more and less likely, with the challenges presented by ethnic differences and claims for group rights, and with the relations between democracy and the distribution of income and wealth.


Ranging over politics, philosophy, constitutional law, economics, sociology, and psychology, this book is written in Shapiro’s characteristic lucid style — a style that engages practitioners within the field while also opening up the debate to newcomers.

Ian Shapirois Sterling Professor of Political Science at Yale University, where he also serves as Henry R. Luce Director of the Yale Center for International and Area Studies. Among his many books are The Flight from Reality in the Human Sciences and, with Michael J. Graetz, Death by a Thousand Cuts (both Princeton); and The Moral Foundations of Politics.

"With great insight and nuanced judgment, Shapiro weaves together three literatures-normative democratic theory, the empirical literature on democratization, and debates over the nature of power (and domination). And the book ranges even farther than that: The facility with which [Shapiro] incorporates economic theory, ethnographies of impoverished communities, and constitutional law is extraordinary."—Leonard C. Feldman, Perspectives on Politics

"[Shapiro's] book is not only an authoritative source, but also exceptionally clear, compact, and well written."—George Klosko, Review of Politics

"[Shapiro] is one of the leaders of an emerging literature that combines insights from political theory and empirical scholarship. In [this book], he deploys both to good effect. The book also couples impressive analytical sophistication with clarity of exposition that makes it accessible to lay readers."—Ilya Somin, Cato Journal

"What does recent research tell us about how well democracies actually correspond to the hopes and aspirations we have for them? In this well-crafted and readable analysis, Ian Shapiro gives a sobering but not pessimistic answer to this question. A must read for democratic theorists and citizens alike!"—Iris Young, University of Chicago

"Shapiro delivers what the title suggests: a survey of the issues most discussed by political theorists and the main positions taken, with plenty of references to the literature for those who wish to pursue the subject further. But he succeeds in doing much more than this. If, as he suggests, the point of democracy is to strengthen the position of the dispossessed and vulnerable, there is a lot wrong not only with the practice of democracy but with much of the theorizing about it. Indeed, Shapiro argues that the most popular nostrums currently put forward by theorists would make matters worse. Even those familiar with the literature discussed will be intrigued and challenged by Shapiro's analysis."—Brian Barry, Columbia University

"This book is smart, erudite, but accessible. The examples Shapiro draws on to illustrate his points—South Africa, the Middle East, U.S. court cases—give the argument immediacy and relevance. It makes a valuable contribution to political theory, and should encourage political theorists to think about real-life politics"—Nancy Hirschmann, University of Pennsylvania

"Shapiro articulates an incisive critique of deliberative theory—the reigning orthodoxy in contemporary normative theorizing about democracy—in a way that will be accessible to an unusually broad audience of political theorists and social scientists, students as well as scholars."—Clarissa Rile Hayward, Ohio State University