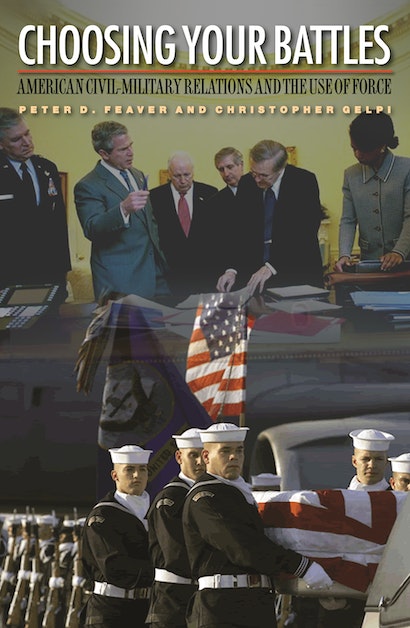 America’s debate over whether and how to invade Iraq clustered into civilian versus military camps. Top military officials appeared reluctant to use force, the most hawkish voices in government were civilians who had not served in uniform, and everyone was worried that the American public would not tolerate casualties in war. This book shows that this civilian-military argument — which has characterized earlier debates over Bosnia, Somalia, and Kosovo — is typical, not exceptional. Indeed, the underlying pattern has shaped U.S. foreign policy at least since 1816. The new afterword by Peter Feaver and Christopher Gelpi traces these themes through the first two years of the current Iraq war, showing how civil-military debates and concerns about sensitivity to casualties continue to shape American foreign policy in profound ways.

"[A] highly statistical but thankfully lucid study. . . . [The authors] find that non-veteran civilian elites are more likely to advocate the use of force than either military elites or civilian leaders with military experience. . . . The pattern holds historically. The authors consider a total of 111 instances from 1816 to 1992."—Chronicle of Higher Education

"Feaver and Gelpi offer important insights into the character of civil-military relations in the U.S. and into its effects on the nature of U.S. foreign policy. . . . [A]n important work whose findings have wide-ranging policy implications."—Spencer D. Bakich, Virginia Quarterly Review

"Feaver and Gelpi's intriguing and well-executed study provides a welcome contribution to scholarship in this area. In it, the authors address a subset of provocative issues within the broader study of American civil-military relations."—Risa A. Brooks, Review of Politics

"One of those rare works of political science that speaks directly and aptly to an issue of policy. Feaver and Gelpi show that the conventional wisdom about attitudes to military engagement and casualties is, and has been, wrong. More importantly, they explain why. One of the most important contributions to the literature on civil-military relations in years."—Eliot Cohen, author of Supreme Command: Soldiers, Statesmen, and Leadership in Wartime

"For half a century, demands of mobilization for World War and Cold War put large percentages of Americans through military service. The abrupt end of this pattern of shared experience makes the large difference in attitudes—with civilian elites favoring more intervention and military professionals more restraint—politically critical. Feaver and Gelpi examine the many crucial facets of contemporary civil-military relations with an unusually impressive combination of comprehensiveness, rigor, and clear argument. Their conclusions will alarm some and please others, but they are important for all to understand if national security policy is to be made wisely."—Richard K. Betts, Director, Columbia University Institute of War and Peace Studies

"This is an important work that deserves a wide audience. Peter Feaver and Christopher Gelpi have combined qualitative and quantitative analyses to produce a major piece of scholarship on a subject of great importance. It is difficult to combine rigorous statistical methods with clear prose, but the authors manage it. The writing is clear and the material is accessible to those not trained in statistics."—John Allen Williams, Loyola University Chicago, author of Soldiers, Society, and National Security

"This book demonstrates quite convincingly that the proportion of military veterans in leadership positions in the federal government has an important impact on the propensity of the United States to initiate militarized disputes."—James Lee Ray, Vanderbilt University, author of Democracy and International Conflict