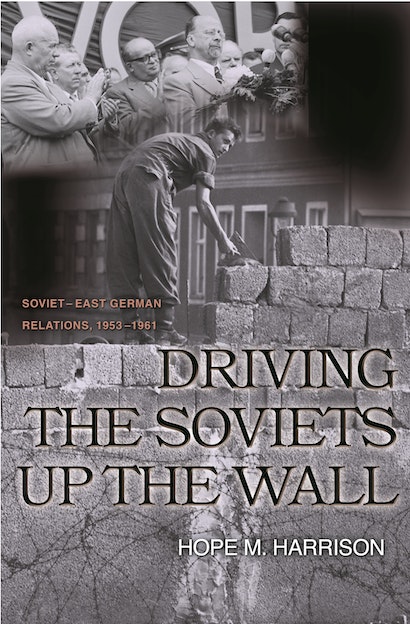 The Berlin Wall was the symbol of the Cold War. For the first time, this path-breaking book tells the behind-the-scenes story of the communists’ decision to build the Wall in 1961. Hope Harrison’s use of archival sources from the former East German and Soviet regimes is unrivalled, and from these sources she builds a highly original and provocative argument: the East Germans pushed the reluctant Soviets into building the Berlin Wall.


This fascinating work portrays the different approaches favored by the East Germans and the Soviets to stop the exodus of refugees to West Germany. In the wake of Stalin’s death in 1953, the Soviets refused the East German request to close their border to West Berlin. The Kremlin rulers told the hard-line East German leaders to solve their refugee problem not by closing the border, but by alleviating their domestic and foreign problems. The book describes how, over the next seven years, the East German regime managed to resist Soviet pressures for liberalization and instead pressured the Soviets into allowing them to build the Berlin Wall. Driving the Soviets Up the Wall forces us to view this critical juncture in the Cold War in a different light. Harrison’s work makes us rethink the nature of relations between countries of the Soviet bloc even at the height of the Cold War, while also contributing to ongoing debates over the capacity of weaker states to influence their stronger allies.

"Harrison has turned over every archival rock in reconstructing the tense relationship between the Soviet Union and Walter Ulbricht's East Germany, from Stalin's death until the construction of the Berlin Wall.. . . Harrison is not alone in teaching us that third parties played a significant role in shaping the Cold War, but hers is a particularly striking example."—Foreign Affairs

"A smoothly written, clearly organized, and massively documented account . . . [which] deserves to be read by every serious student of post-war Europe."—W.J. Lavery, History: Reviews of New Books

"This aptly entitled book makes an outstanding contribution to what has become known as 'the new Cold War history.' Lucidly written and fascinating to read, it demonstrates how, under a unique set of circumstances, a satellite state in the depths of existential crisis could manipulate a superpower."—Peter Grieder, Central European History

"Harrison has written a thoughtful, fluent, and meticulously researched study of Soviet-East German relations between 1953 and 1961. Driving the Soviets Up the Wall is a fine example of the new scholarship on the cold war that has emerged since 1991 and a rewarding read for anybody interested in finding out exactly how and why the Berlin Wall came to be built."—Alan McDougall, Journal of Modern History

"Hope Harrison's book is a truly distinguished example of new Cold War scholarship. As an account of Soviet-East German relations from 1953 to 1961, it is likely to be definitive. As a case study of how a small power can manipulate a super-power, it is sure to become a classic. As both multi-archival history and international relations theory, therefore, Driving the Soviets up the Wall is a remarkable accomplishment indeed."—John Lewis Gaddis, Yale University

"Hope Harrison has written a lucid, penetrating, and deeply knowledgeable study on the relationship between the Kremlin and its most important satellite."—Strobe Talbott, Brookings Institution

"This book is likely to become the definitive study on the Berlin Wall's construction. It is valuable not only because of the perspective Harrison provides on the behind-the-scenes interactions between Moscow and East Berlin, but also because of the new insight she gives us into the always complicated and sometimes tumultuous relationship between two of the Cold War's most colorful personalities, Nikita Khrushchev and Walter Ulbricht. I would recommend this book to anyone."—A. James McAdams, William M. Scholl Professor of International Affairs, University of Notre Dame

"Skillfully using new Soviet and German sources, Hope Harrison weaves a fascinating story of the events leading to the construction of the Berlin wall. Readers will be intrigued by her analysis of the Khrushchev-Ulbricht relationship and by her recasting of the GDR-USSR relationship. This book is essential reading for anyone interested in the history of the Cold War."—Mel Leffler, University of Virginia

"This book provides us with important new information on a crucial and understudied period of the Cold War. The documentation is, in fact, quite remarkable. More importantly, the book contains the seeds of an original and controversial interpretation of intra-Bloc relations by showing how the peripheral states of the Soviet empire could exercise a paradoxical sort of power in relation to Moscow."—Thomas Banchoff, Georgetown University, author of The German Problem Transformed

"No one has had an opportunity to assess as much original archival material concerning Soviet-East German relations during the 1953-1961 period, and to paint as detailed a picture of this relationship, as Hope Harrison. Her argument about East German influence over the Soviets is provocative and convincing. This book will force students of the Cold War to reassess their views of East Germany and its role between East and West."—Jeffrey Kopstein, University of Toronto, author of The Politics of Economic Decline in East Germany 1945-1989