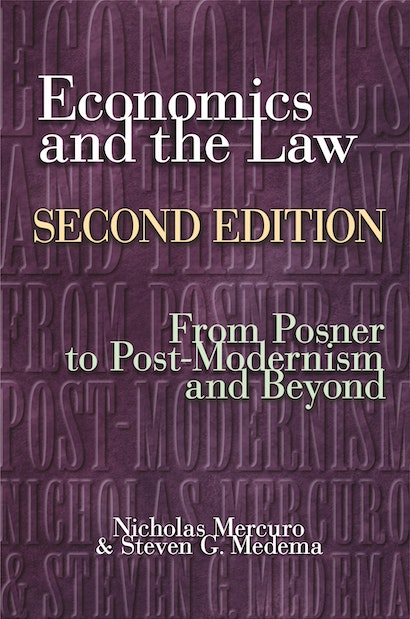 This is an expanded second edition of Nicholas Mercuro and Steven Medema’s influential book Economics and the Law, whose publication in 1998 marked the most comprehensive overview of the various schools of thought in the burgeoning field of Law and Economics. Each of these competing yet complementary traditions has both redefined the study of law and exposed the key economic implications of the legal environment. The book remains true to the scope and aims of the first edition, but also takes account of the field’s evolution.


At the book’s core is an expanded discussion of the Chicago school, Public Choice Theory, Institutional Law and Economics, and New Institutional Economics. A new chapter explores the Law and Economics literature on social norms, today an integral part of each of the schools of thought. The chapter on the New Haven and Modern Civic Republican approaches has likewise been expanded. These chapters are complemented by a discussion of the Austrian school of Law and Economics. Each chapter now includes an “At Work” section presenting applications of that particular school of thought.


By providing readers with a concise, noncritical description of the broad contours of each school, this book illuminates the fundamental insights of a field with important implications not only for economics and the law, but also for political science, philosophy, public administration, and sociology.

Nicholas Mercuro is Professor of Law in Residence at Michigan State University College of Law and a faculty member of James Madison College. He has authored or edited seven books and is the founder and coeditor of the book series The Economics of Legal Relationships. Steven G. Medema, Professor of Economics at the University of Colorado at Denver, is the author of Ronald H. Coase and editor of the Journal of the History of Economic Thought.

"[This book] provides an excellent introduction to the broad contours of Law and Economics. . . . It can be especially recommended to readers interested in short but very informative overviews on different aspects of this discipline."—Hans-Bernd Schäfer, Journal of Institutional and Theoretical Economics

"'You can't tell the players without a scorecard,' or so vendors at a baseball game say, and the Mercuro and Medema book under review provides team scorecards and much more: intellectual histories and outlines of the dominant styles of play by the Chicago school and its New Haven opponents, the public choice school and its civic republican opposition, institutional and neoinstitutional economics, and critical legal studies as a postmodern counterweight to the various economics enterprises."—Paul H. Brietzke, Valparaiso University Law Review

"The authors' primary goal, which they achieve admirably, is to provide a concise review of the major scholarly traditions that use economic analysis of the law. . . . [T]he descriptions of each tradition are clear and painstakingly evenhanded. . . . This brief volume provides a sound understanding of each tradition's virtues and weaknesses."—Constitutional Political Economy

"It is arguable that over the past 20 years, roughly the years of the Volker and Greenspan Federal Reserve Boards, the branch of study that goes by the name Law and Economics has had more influence on public economic policy than any other academic discourse. . . . In the face of such a shift in thinking about public policy, it is important to have a fair-minded primer that clearly explains the various aspects of thinking about law and economics in the policy arena today. This book attempts to provide just such a primer. It is notable for the clarity and fairness of its exposition of what are controversial debates about the proper direction for economic policy."—John Henry Schiegel, Southern Economic Journal