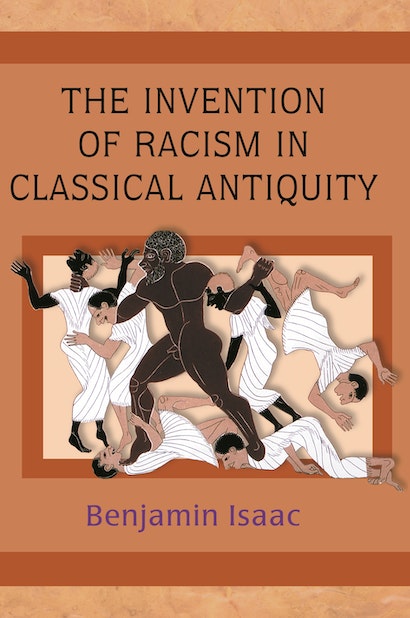 There was racism in the ancient world, after all. This groundbreaking book refutes the common belief that the ancient Greeks and Romans harbored “ethnic and cultural,” but not racial, prejudice. It does so by comprehensively tracing the intellectual origins of racism back to classical antiquity. Benjamin Isaac’s systematic analysis of ancient social prejudices and stereotypes reveals that some of those represent prototypes of racism — or proto-racism — which in turn inspired the early modern authors who developed the more familiar racist ideas. He considers the literature from classical Greece to late antiquity in a quest for the various forms of the discriminatory stereotypes and social hatred that have played such an important role in recent history and continue to do so in modern society.


Magisterial in scope and scholarship, and engagingly written, The Invention of Racism in Classical Antiquity further suggests that an understanding of ancient attitudes toward other peoples sheds light not only on Greco-Roman imperialism and the ideology of enslavement (and the concomitant integration or non-integration) of foreigners in those societies, but also on the disintegration of the Roman Empire and on more recent imperialism as well. The first part considers general themes in the history of discrimination; the second provides a detailed analysis of proto-racism and prejudices toward particular groups of foreigners in the Greco-Roman world. The last chapter concerns Jews in the ancient world, thus placing anti-Semitism in a broader context.

Benjamin Isaac is Lessing Professor of Ancient History at the University of Tel Aviv. He is a member of the Israel Academy of Sciences and Humanities and the author of The Limits of Empire: The Roman Army in the East.

"This is a big book on an important subject."—Choice

"The Invention of Racism in Classical Antiquity pores over substantial textual evidence to confirm that both the ancient Greeks and Romans possessed nationalistic tendencies. . . . Isaac's book is seriously academic and will long remain an essential standard tool for debate."—Sean Kingsley, Times Higher Education Supplement

"[An] important book. . . . [A]nyone concerned with racism, and more generally with the moral complexity of our civilization, will be profoundly educated by Isaac's magisterial and ethically lucid study."—Paula Fredriksen, The New Republic

"The author's magisterial and comprehensive command of the sources and the modern academic literature lends his thesis authority. He thoughtfully summarizes his arguments and conclusions from time to time. His line of thought is clear and his language is straightforward."—Ralph Amelan, The Jerusalem Post

"The principal aim of this massive, heavily documented study . . . is to establish that racism, like so many other articles of European mental furniture, was first given shape and substance by the fifth-century Greeks. . . . [Benjamin] Isaac's accessible, ground-breaking study is a timely and important work."—Margaret H. Williams, Journal of Jewish Studies

"This is a hugely learned and provocative book. . . . Benjamin Isaac is a classical scholar, and his experience of twentieth-century anti-Semitism has both made him uniquely alive to his topic, and led him to look for the 'roots' of one particular type of racism in classical antiquity."—Christopher Jones, Scripta Classica Israelica

"This is the first serious scholarly work to confront the problem of race and racism in Greco-Roman antiquity. . . . [Benjamin] Issac has deflated once and for all any easy suppositions about the modern origins of one of humankind's bitterest legacies."—Brent D. Shaw, Journal of World History

"The 563 pages of this book represent an academic tour-de-force, showing vast knowledge of ancient sources from Herodotus to late antiquity, and an equally impressive mastery of early modern scholarship from the sixteenth century onwards, drawing out many links between ancient and modern thinking."—David Noy, Journal of the Classical Association of Canada

"The Invention of Racism in Classical Antiquity is a compelling work that has been written with so much clarity, precision and erudition that it is almost impossible not to accept the author's views. It is also one of those books that will definitely change the way we look at the ancient world, a world that invented not only 'logos', democracy and philosophy, but also the art of using pseudo-scientific arguments in order to justify the worst ways of dealing with other men. Last but not least, Isaac establishes that considering racial discrimination in its earliest forms is a good way of gaining 'a better understanding of their contemporary forms,' since such prejudices continue to be at the root of most hatreds (and most wars) that are devastating today's world. For these reasons, this book is essential for anyone interested in the topic of racism."—Christian Delacampagne, Patterns of Prejudice

"A revolutionary work of immense relevance to the tensions of our contemporary globalized society. Enormous in scope, erudition, and importance, it is lucidly written and can easily be appreciated by any historically minded reader."—Glen W. Bowersock, Institute for Advanced Study

"Benjamin Isaac's treatment of this complex problem is the first comprehensive, intelligible, and truly magisterial one of which I am aware. The book will be an invaluable source of information, discussion, and interpretation for any person (scholar or layman) interested in any aspect of the problem of ethnic identity, whether in antiquity or in modern times."—Martin Ostwald, Swarthmore College and University of Pennsylvania

"The Invention of Racism in Classical Antiquity is by far the most sweeping and all-encompassing study of stereotypes and hostile portrayals by Greeks and Romans of other peoples that has yet been written. Isaac details the classical world's biased conceptualizations of Phoenicians, Carthaginians, Syrians, Egyptians, Persians, Gauls, Germans, and Jews. As Isaac shows, the diverse images constructed at that time of genetic inferiority, of environmental and geographic influence, of descent and lineage, and propagation of fear of the alien have had an enduring impact on thinkers and public figures in Europe and the United States even up to the present time."—Erich S. Gruen, Gladys Rehard Wood Professor of History and Classics, University of California, Berkeley