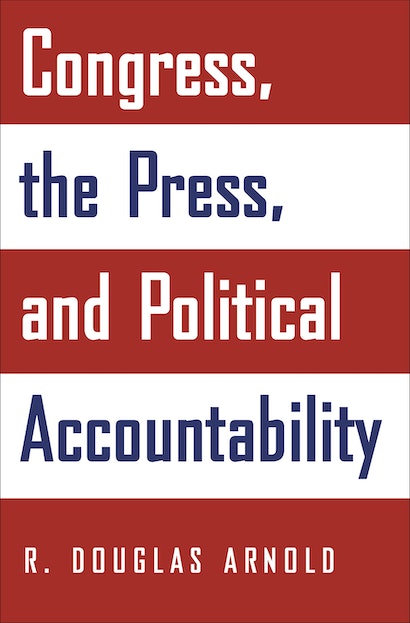 Congress, the Press, and Political Accountability is the first large-scale examination of how local media outlets cover members of the United States Congress. Douglas Arnold asks: do local newspapers provide the information citizens need in order to hold representatives accountable for their actions in office? In contrast with previous studies, which largely focused on the campaign period, he tests various hypotheses about the causes and consequences of media coverage by exploring coverage during an entire congressional session.


Using three samples of local newspapers from across the country, Arnold analyzes all coverage over a two-year period — every news story, editorial, opinion column, letter, and list. First he investigates how twenty-five newspapers covered twenty-five local representatives; and next, how competing newspapers in six cities covered their corresponding legislators. Examination of an even larger sample, sixty-seven newspapers and 187 representatives, shows why some newspapers cover legislators more thoroughly than do other papers. Arnold then links the coverage data with a large public opinion survey to show that the volume of coverage affects citizens’ awareness of representatives and challengers.


The results show enormous variation in coverage. Some newspapers cover legislators frequently, thoroughly, and accessibly. Others — some of them famous for their national coverage — largely ignore local representatives. The analysis also confirms that only those incumbents or challengers in the most competitive races, and those who command huge sums of money, receive extensive coverage.

R. Douglas Arnold is William Church Osborn Professor of Public Affairs and Professor of Politics at Princeton University. His books include The Logic of Congressional Action, which won the 1990 Fenno Prize for the best book in legislative studies, and Congress and the Bureaucracy.

"Arnold here does it all: he identifies important research questions, conducts extensive research to answer them, and interprets data carefully. This sophisticated and thoughtful study is the best yet of Congress and the press."—Choice

"Arnold sets an ambitious goal: 'This book is the first large-scale study of how local media outlets cover members of Congress.' His ultimate success exemplifies how content analysis can illuminate a subject with empirical and systematic findings. . . . This exploration constitutes a significant contribution to our understanding of Congress and the news media. . . . [The book] has a timeless feel . . . [which] seems to guarantee that readers will be learning from this book well into the future."—Robert Klotz, Perspectives on Politics

"No one has ever done anything this ambitious, data rich, or convincing on the subject of newspaper coverage of members of Congress. Not only will the book interest political scientists but it should be required reading in all journalism courses aimed at showing what good congressional coverage is and can be."—David Mayhew, Yale University, author of Electoral Realignment

"This is an excellent and important work of research. Thorough, thoughtful, and necessary, it will be indispensable to both political scientists and media scholars. There is nothing else about media coverage of Congress that even begins to compare."—Michael Schudson, University of California, San Diego, author of The Good Citizen

"What started as an inquiry about Congress is also sure to become a landmark study in political communication. Arnold's ambitious, innovative, and beautifully executed assessment of what the nation's newspapers said about their hometown members of Congress over a two-year period—and with what results—gives us extraordinary insights not only into congressional accountability but also into the news, both bad and often surprisingly good, about today's media coverage of politics."—Timothy E. Cook, Professor in the Kevin P. Reilly, Sr., Chair of Political Communication, Manship School of Mass Communication, Louisiana State University