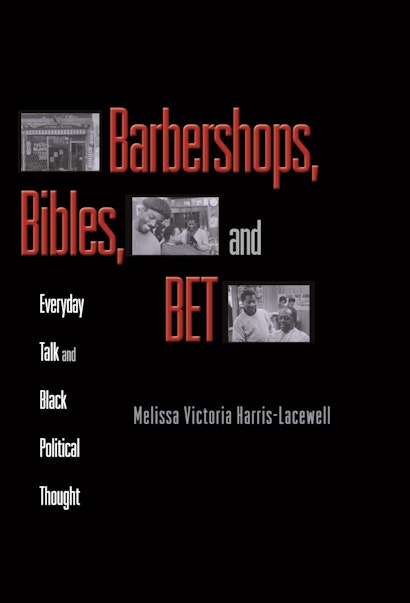 What is the best way to understand black political ideology? Just listen to the everyday talk that emerges in public spaces, suggests Melissa Harris-Lacewell. And listen this author has — to black college students talking about the Million Man March and welfare, to Southern, black Baptists discussing homosexuality in the church, to black men in a barbershop early on a Saturday morning, to the voices of hip-hop music and Black Entertainment Television.

Using statistical, experimental, and ethnographic methods Barbershops, Bibles, and B.E.T offers a new perspective on the way public opinion and ideologies are formed at the grassroots level. The book makes an important contribution to our understanding of black politics by shifting the focus from the influence of national elites in opinion formation to the influence of local elites and people in daily interaction with each other. Arguing that African Americans use community dialogue to jointly develop understandings of their collective political interests, Harris-Lacewell identifies four political ideologies that constitute the framework of contemporary black political thought: Black Nationalism, Black Feminism, Black Conservatism and Liberal Integrationism. These ideologies, the book posits, help African Americans to understand persistent social and economic inequality, to identify the significance of race in that inequality, and to devise strategies for overcoming it.

Melissa Harris-Perry, formerly Melissa Victoria Harris-Lacewell, is the Maya Angelou Presidential Chair at Wake Forest University, where she is the founding director of the Anna Julia Cooper Center. She is editor-at-large at Elle.com and hosted the Melissa Harris-Perry show on MSNBC from 2012–2016. She is also the author of Sister Citizen: Shame, Stereotypes, and Black Women in America.

"[A]n invaluable addition to the African American politics canon. . . . [This book] is well written and original in its conception, and it represents a remarkable achievement. It will undoubtedly generate more work in the future that probes the sources and character of black political thought, as well as the ability of ordinary black folk to think for themselves."—Richard Iton, Perspectives on Politics

"The book convincingly demonstrates that there are many aspects of black ideology and opinion, a fact that is necessarily overlooked in conventional analyses of voting patterns, partisan affiliation, or interest group involvement."—Choice

"The book impressively weaves multiple research methods to provide a comprehensive understanding of black political ideology. . . . By following Harris-Lacewell's example of paying close attention to the intersection of race and other forms of social stratification, we could better understand how the meaning of blackness and the 'Black agenda' is constructed within the black community."—Patricia Hill Collins, Ethnic and Racial Studies

"While sociologists have produced wonderful ethnographic works on the black community, few have explained the political relevance of discourse in these communities. Harris-Lacewell links public discourse with ideology formation and political behavior in a way that is compelling, new, and important."—Andrea Simpson, University of Richmond, author of The Tie that Binds