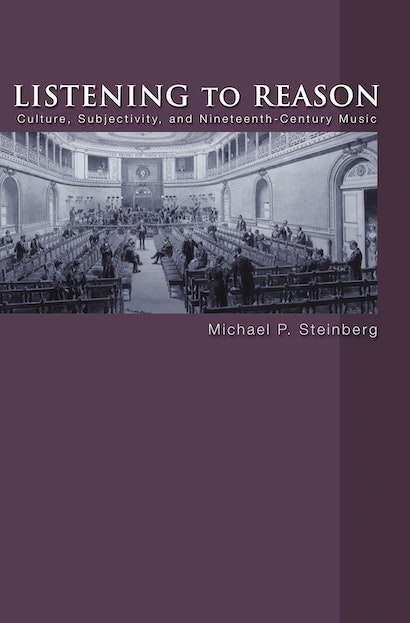 This pathbreaking work reveals the pivotal role of music — musical works and musical culture — in debates about society, self, and culture that forged European modernity through the “long nineteenth century.” Michael Steinberg argues that, from the late 1700s to the early 1900s, music not only reflected but also embodied modern subjectivity as it increasingly engaged and criticized old regimes of power, belief, and representation. His purview ranges from Mozart to Mahler, and from the sacred to the secular, including opera as well as symphonic and solo instrumental music.


Defining subjectivity as the experience rather than the position of the “I,” Steinberg argues that music’s embodiment of subjectivity involved its apparent capacity to “listen” to itself, its past, its desires. Nineteenth-century music, in particular music from a north German Protestant sphere, inspired introspection in a way that the music and art of previous periods, notably the Catholic baroque with its emphasis on the visual, did not.


The book analyzes musical subjectivity initially from Mozart through Mendelssohn, then seeks it, in its central chapter, in those aspects of Wagner that contradict his own ideological imperialism, before finally uncovering its survival in the post-Wagnerian recovery from musical and other ideologies.


Engagingly written yet theoretically sophisticated, Listening to Reason represents a startlingly original corrective to cultural history’s long-standing inhibition to engage with music while presenting a powerful alternative vision of the modern.

Michael P. Steinberg is Professor of History and Music, and Inaugural Director of the Cogut Center for the Humanities at Brown University. He is Associate Editor of The Musical Quarterly as well as author of Austria as Theater and Ideology: The Meaning of the Salzburg Festival, which won Austria's Victor Adler Prize for History in 2001. He is also the recipient of the Berlin Prize and a Guggenheim Fellowship.

"Michael P. Steinberg's subject is the vast change that came over music in the 19th century, from something couched in public terms—religious or ceremonial—to something that feels essentially private, even when it happens in public. It's a familiar idea, but what makes this book original is the way he complicates it with other historical currents."—Ivan Hewett, BBC Music Magazine

"With Listening to Reason: Culture, Subjectivity, and NIneteenth-Century Music, Michael P. Steinberg offers a provocative, intermittently brilliant rooting of nineteenth-century music . . . in contemporaneous cultural and intellectual history. Few major German composers of the era go unexamined, and few readers are likely to walk away from the book with their understanding of this repertoire, and the culture from and for which it speaks, unrevised."—Peter Mercer-Taylor, Notes

"Listening to Reason is a work of high integrity; it has a great deal to teach. Indeed, it's a book of importance."—Richard Leppert, Beethoven Forum

"Michael P. Steinberg has not only made a simultaneous contribution to the fields of cultural history and musicology, he has authoritatively illustrated the importance of their interaction, or the close connection between the questions, theoretical approaches, and methodologies with which they are mutually engaged. . . . Steinberg has made a truly major contribution to our understanding of how musical meaning, values, and creativity in the Austro German sphere were intertwined with the ambient ideological and political tensions."—Jane F. Fulcher, Journal of Modern History

"This book may well become the next big statement on nineteenth-century music as a cultural phenomenon. Many will argue with it and, indeed, argue passionately—this is, after all, the proverbial problem that arises when one brings up religion and politics!—but that is precisely what is wanted and valued now. Moreover, it is not only accessible but will be vastly rewarding to music scholars, general and cultural historians, cultural theorists, and even many people who would simply describe themselves as music lovers."—Scott Burnham, Princeton University

"This book provides original and startlingly creative contexts for the canonical musical figures that form its focus. For instance, the juxtaposition of Mozart and Rousseau as parallel voices in the development of a new kind of subjectivity yields brilliant insights, as does the linking of Beethoven, Goethe, and Schiller in the formulation of the 'genius as hero.' Perhaps the most suggestive of the author's depictions is of Wagner, whose cultural trajectory is read against Max Weber's The Protestant Ethic and the Spirit of Capitalism. Steinberg writes from the dual perspective of the cultural historian and the cultural critic, and much of the freshness and polemical vigor of the book comes from this unusual combination."—Mary Gluck, Brown University