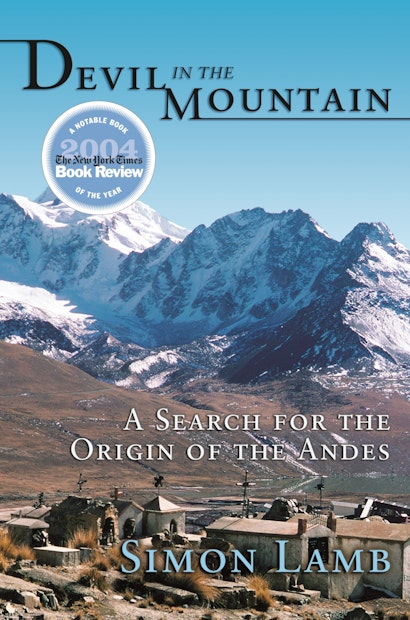 How do high mountain ranges form on the face of the Earth? This question has intrigued some of the greatest philosophers and scientists, going back as far as the ancient Greeks. Devil in the Mountain is the story of one scientist, author Simon Lamb, and his quest for the key to this great geological mystery.


Lamb and a small team of geologists have spent much of the last decade exploring the rugged Bolivian Andes, the second highest mountain range on Earth — a region rocked by earthquakes and violent volcanic eruptions. The author’s account is both travelogue and detective story, describing how he and his colleagues have pursued a trail of clues in the mountains, hidden beneath the rocky landscape. Here, the local silver miners strive to appease the spirit they call Tio-the devil in the mountain.


Traveling through Bolivia’s back roads, the team has to cope with the extremes of the environment, and survive in a country on the verge of civil war. But the backdrop to all these adventures is the bigger story of the Earth and how geologists have gone about uncovering its secrets. We follow the tracks of the dinosaurs, who never saw the Andes but left their mark on the shores of a vast inland sea that covered this part of South America more than sixty-five million years ago, long before the mountains existed. And we learn how to find long lost rivers that once flowed through the landscape, how continents are twisted and torn apart, and where volcanoes come from.


By the end of their journey, Lamb and his team turn up extraordinary evidence pointing not only to the fundamental instability of the Earth’s surface, but also to unexpected and profound links in the workings of our planet.

Simon Lamb is Lecturer in the Department of Earth Sciences at Oxford University and a Fellow of St. Cross College. He is coauthor of Earth Story: The Forces That Have Shaped Our Planet, recently revised in paperback by Princeton University Press.

"An absorbing account of the many years Lamb has spent exploring and pondering the Andes. But the book is not simply about a particular place or one scientific career. Lamb gives his readers a wonderful feel for how geology works- how geologists gather clues, test hypotheses and ultimately come to understand the workings of the world. . . . [The book] make[s] us so familiar with the history of the Andes that they become living things."—Carl Zimmer, New York Times Book Review

"An absorbing account of how geologists come to understand the workings of the world."—The New York Times

"Simon Lamb's book is an enticing blend of personal adventure and scientific explanation. It is an unusual scientist who manages to describe the world vividly but also explain the science clearly. . . . Lamb takes us painlessly through the workings of the great engine of the earth—and what could be more important than understanding how our planet is put together. . . . His descriptions of flogging through the jungle-clad eastern foothills of the Andes leave one relieved to be able to experience it all from the comfort of an armchair."—Richard A. Fortey, Times Literary Supplement

"[An] engrossing and well-written book. . . . Lamb's writing is engaging and clear. . . . Even when he tackles esoteric areas of geophysics and dynamical modeling far from his own field of expertise, Lamb exhibits an enviable facility for simplifying complex and, in some cases, quite controversial ideas. He has keen insight into Bolivian geology and a sympathetic eye for local culture. . . . Devil in the Mountain makes compelling reading. Lamb has done a masterful job in piecing together the Andean puzzle in a way that seems to make perfect sense."—David E. James, Nature

"[Lamb's] prose is lively and for the most part free of jargon. His tales of adventures during individual field campaigns engage readers in a way that a straight science text could not. Most important, he describes particularly well the process by which a field geologist interprets the Earth."—Richard W. Allmendinger, American Scientist

"This book describes physical quests as well as a scientific one. The history of mountains can only be told in millennia, but in America the history of people's attempts to make mountains their own can be told in a few centuries."—Washington Post Book World

"This is Lamb at his best, telling gripping stories of the Earth, making the reader think s/he's sitting with him around the camp-fire during his field work. Lamb sheds some light on a world of science as rarely told; and the listener feels part of his field trip, warmed by the fire and a glass of local brew."—Maarten J. de Wit, University of Cape Town, Rondebosch

"If I were reading this book for the first time and didn't know what to do with my life, I would immediately enroll in the nearest geology program. This account of life on the Altiplano is a masterful integration of geological concepts and personal experiences."—Grant Heiken, past president, International Association of Volcanology and Chemistry of the Earth's Interior, and co-author of Volcanoes: Crucibles of Change and the forthcoming The Seven Hills of Rome

"In this very engaging book, Lamb masterfully blends personal anecdotes about trips to exotic places in different parts of the globe with the science of a fascinating range of geological phenomena and processes to explain how mountains in general and the Andes in particular are built."—S. George Philander, Princeton University, author of the forthcoming Our Affair with El Niño: How We Transformed an Enchanting Peruvian Current into a Global Climate Hazard.