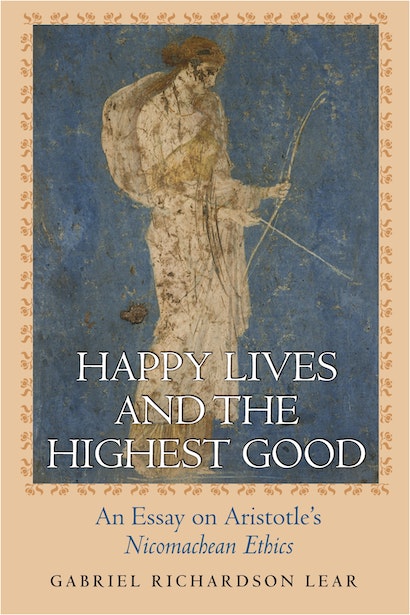 Gabriel Richardson Lear presents a bold new approach to one of the enduring debates about Aristotle’s Nicomachean Ethics: the controversy about whether it coherently argues that the best life for humans is one devoted to a single activity, namely philosophical contemplation. Many scholars oppose this reading because the bulk of the Ethics is devoted to various moral virtues — courage and generosity, for example — that are not in any obvious way either manifestations of philosophical contemplation or subordinated to it. They argue that Aristotle was inconsistent, and that we should not try to read the entire Ethics as an attempt to flesh out the notion that the best life aims at the “monistic good” of contemplation.


In defending the unity and coherence of the Ethics, Lear argues that, in Aristotle’s view, we may act for the sake of an end not just by instrumentally bringing it about but also by approximating it. She then argues that, for Aristotle, the excellent rational activity of moral virtue is an approximation of theoretical contemplation.


Thus, the happiest person chooses moral virtue as an approximation of contemplation in practical life. Richardson Lear bolsters this interpretation by examining three moral virtues — courage, temperance, and greatness of soul — and the way they are fine. Elegantly written and rigorously argued, this is a major contribution to our understanding of a central issue in Aristotle’s moral philosophy.

Gabriel Richardson Lear is Assistant Professor of Philosophy at the University of Chicago.

"This is an interesting, novel, and well-informed reading of Aristotle's ethics."—Choice

"A fine book. Anyone interested in Aristotle's ethics should read it."—Norman O. Dahl, Philosophy in Review

"The book is rewarding for its close study of several of Aristotle's most vexed passages in an accessible and imaginative way; particularly worthwhile are the discussions of self-sufficiency, . . . the kalon, and 'greatness of soul.'"—Julia Annas, Notre Dame Philosophical Reviews

"Original and provocative. . . . It is a very important study, fresh and creative, and clearly argued, which all Aristotelian scholars, as well as scholars interested in the history of ethics, should read and meditate on."—Pierre, Destrée, Ethics

"Lear writes very well: she has a gift for choosing the precise word and the vivid illustration. In choosing examples to enforce a thesis she is equally at home in Aristotle's world and in our own. . . . Altogether, this is an excellent book, both in content and in presentation. . . . [An] exciting synthesis of Aristotelian ethical teaching."—Anthony Kenny, Mind

"The book is thorough and . . . very well argued. It is a substantial contribution to the study of Aristotle's Ethics."—Peter Lautner, Classical World

"Richardson Lear's topic—Aristotle's conception of the highest good—is one to which much attention has been devoted recently, and yet she manages to approach it from a fresh angle and to offer a new reading that deserves careful consideration. Her thesis is bold and subverts many other interpretations of the Nicomachean Ethics."—Richard Kraut, Northwestern University