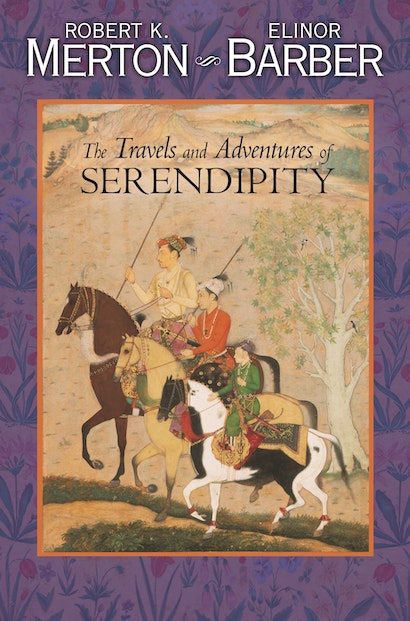 From the names of cruise lines and bookstores to an Australian ranch and a nudist camp outside of Atlanta, the word serendipity — that happy blend of wisdom and luck by which something is discovered not quite by accident — is today ubiquitous. This book traces the word’s eventful history from its 1754 coinage into the twentieth century — chronicling along the way much of what we now call the natural and social sciences.


The book charts where the term went, with whom it resided, and how it fared. We cross oceans and academic specialties and meet those people, both famous and now obscure, who have used and abused serendipity. We encounter a linguistic sage, walk down the illustrious halls of the Harvard Medical School, attend the (serendipitous) birth of penicillin, and meet someone who “manages serendipity” for the U.S. Navy.


The story of serendipity is fascinating; that of The Travels and Adventures of Serendipity, equally so. Written in the 1950s by already-eminent sociologist Robert Merton and Elinor Barber, the book — though occasionally and most tantalizingly cited — was intentionally never published. This is all the more curious because it so remarkably anticipated subsequent battles over research and funding — many of which centered on the role of serendipity in science. Finally, shortly after his ninety-first birthday, following Barber’s death and preceding his own by but a little, Merton agreed to expand and publish this major work.


Beautifully written, the book is permeated by the prodigious intellectual curiosity and generosity that characterized Merton’s influential On the Shoulders of Giants. Absolutely entertaining as the history of a word, the book is also tremendously important to all who value the miracle of intellectual discovery. It represents Merton’s lifelong protest against that rhetoric of science that defines discovery as anything other than a messy blend of inspiration, perspiration, error, and happy chance — anything other than serendipity.

Robert K. Merton, who died in 2003, was one of the leading sociologists of the twentieth century. His many books include Social Theory and Social Structure and On the Shoulders of Giants. Elinor Barber was, at the time of her death, Research Associate at Columbia University. She is a coauthor of Bridges to Knowledge and Increasing Faculty Diversity. James L. Shulman is Executive Director of ARTstor and a coauthor of The Game of Life (Princeton).

"And so serendipity began its life—a saga of misunderstandings, neglect, resurrection, distortion, celebration and controversy, all of which is chronicled with heroic enterprise and humble wit in The Travels and Adventures of Serendipity.... The history remains intact, and the intellectual trajectory outlines by Merton has, if anything, continued with even greater force."—Edward Rothstein, New York Times

"An intellectual text, both a pleasure to read and a genuine contribution to scholarship."—Andrew Scull, Times Literary Supplement

"A fascinating text that captivates the reader from the start. . . . In the course of following the evolution of the word serendipity, Merton and Barber provide many interesting insights into how new knowledge is produced, not only in the sciences but also in the humanities."—Cristina Gonzalez, Science

"A humane, learned and very wise book. It was finished in 1958 and lay in Merton's files until just a few years ago. . . . It is a pity that we had to wait so long for it, since The Travels and Adventures of Serendipity is the great man's greatest achievement."—Steve Shapin, American Scientist

"The Travels and Adventures of Serendipity is a vivid study in how words reflect their times and offers an extra delight: Merton's new afterword tracing the journey of the word since he first wrote about it. . . . Merton was a sociologist in the same way Shakespeare could be called a theater person."—Jay Tolson, U.S. News and World Report

"The sociologist Robert K. Merton, who died a year ago this month at the age of 92, had a genius for plucking fascinating phenomena out of thin air, giving them names, and changing the way we see the world. . . . Merton might have had his name linked to one more concept, 'serendipity,' but for a peculiar decision of his. He wrote a book on the subject in the 1950s, together with Elinor G. Barber, a Columbia University researcher. Then he had second thoughts and stuffed the manuscript in a drawer. Now as a capstone to the man's brilliant career, Princeton University Press has brought the abandoned book out into English for the first time."—Christopher Shea, Boston Globe

"This long awaited, long unpublished manuscript proffers enough of its own pleasures that no connoisseur of eccentric erudition will want to forgo them."—Michael Dirda, Washington Post Book World

"This is the best written and most entertaining book of sociology ever written."—Philip Howard, The Times (London)

"The word 'serendipity' was coined in 1754 by Horace Walpole. . . . Walpole would appreciate the many digressions and diversions that shape the travels and adventures of his lighthearted coinage and the delight with which Merton and Barber tell its story."—Craig Calhoun, Bookforum

"Curiosity, wonder, openness—these cohabit, comfortably, in that marvelous coinage of Walpole, serendipity. And they mark as well Merton and Barber's ebullient journey in search of all the meanings of the word. A romp of minds at play!"—Roald Hoffmann, Department of Chemistry, Cornell University, and Nobel Laureate in Chemistry

"One definition of serendipity is: 'The faculty of making happy and unexpected discoveries by accident.' Notice that 'faculty' and don't you wish you had it. Merton had it—oh boy, did he—and this treat of a book exemplifies just that. Here is one of those cases where the voyage is even more fun than the destination. There are off-beat nuggets about discovery and scholarship, and about the sociology of discovery and scholarship, and then there are ironical comments about the whole enterprise as it occurs. You will experience serendipity even while you are being educated about it, and you will learn to combine fun and profit."—Robert M. Solow, Institute Professor Emeritus, Department of Economics, Massachusetts Institute of Technology, and Nobel Laureate in Economic Sciences

"What a splendid book! The Adventures and Travels of Serendipity is not only a guide to the extraordinary history and present-day usefulness of the blessings that can come from those unplanned, accidental events which, sagaciously employed, can shape one's life. But equally, the volume is an exemplification of superb scholarship presented in graceful style. Indeed, while reading the book one realizes that one perceives its unique subject matter from the vantage of standing on the shoulders of giants."—Gerald Holton, Harvard University

"Merton and Barber's work, The Travels and Adventures of Serendipity, is a highly original sociological essay and a great work of literature at the same time. Decades ago, when I first heard about this manuscript, I wanted to read it. To have it now, as if as a gift from the late Robert K. Merton, is a pleasure long awaited. Generations of scholars to come will enjoy it and learn from it."—Wolf Lepenies, Wissenschaftskolleg zu Berlin

"This book exceeded my expectations, both for erudition and for entertainment. Its broad-gauged inquiry offers fascinating material for readers of many kinds. Like On the Shoulders of Giants, this book floods readers with information of every imaginable kind, introduces fantastic characters, and describes bizarre and wonderful books. It also offers something that On the Shoulders of Giants could not: explicit reflections on the meaning of Merton's work. The publication of this book is a fitting tribute to a great scholar but also an intervention in current scholarly and scientific debates."—Anthony Grafton, Princeton University