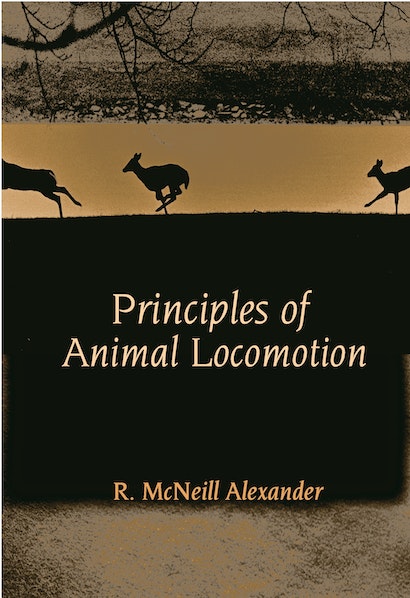 How can geckoes walk on the ceiling and basilisk lizards run over water? What are the aerodynamic effects that enable small insects to fly? What are the relative merits of squids’ jet-propelled swimming and fishes’ tail-powered swimming? Why do horses change gait as they increase speed? What determines our own vertical leap? Recent technical advances have greatly increased researchers’ ability to answer these questions with certainty and in detail.


This text provides an up-to-date overview of how animals run, walk, jump, crawl, swim, soar, hover, and fly. Excluding only the tiny creatures that use cilia, it covers all animals that power their movements with muscle — from roundworms to whales, clams to elephants, and gnats to albatrosses. The introduction sets out the general rules governing all modes of animal locomotion and considers the performance criteria — such as speed, endurance, and economy — that have shaped their selection. It introduces energetics and optimality as basic principles. The text then tackles each of the major modes by which animals move on land, in water, and through air. It explains the mechanisms involved and the physical and biological forces shaping those mechanisms, paying particular attention to energy costs.


Focusing on general principles but extensively discussing a wide variety of individual cases, this is a superb synthesis of current knowledge about animal locomotion. It will be enormously useful to advanced undergraduates, graduate students, and a range of professional biologists, physicists, and engineers.

R. McNeill Alexander is Emeritus Professor of Zoology at the University of Leeds and a Fellow of the Royal Society. He is the author of more than a dozen books, including Optima for Animals (Princeton), as well as the award-winning CD-ROM How Animals Move.

"A valuable reference book written by a leader in the field."—Stephen Gatesy, Nature

"A remarkable volume that simply must be read by anyone contemplating any kind of work on, or in imitation of, muscle-driven motion. This is no ordinary summing up but rather a synthesis, an explication of principles—the title needs no disclaimer. . . . [O]ne should read it in short bouts separated by intervals of contemplation."—Steven Vogel, American Scientist

"This is an important work that will be appreciated by anyone interested in animal biomechanics. . . . Alexander is gifted in his ability to choose or create models that are sufficiently simple as to be understandable and tractable, but not so simple that they stray far from biological reality."—Robert Josephson, The Quarterly Review of Biology

"The book will be a godsend for any lecturer looking for a course book about animal locomotion, and many a naturalist will find that it sheds a flood of light on the reasons behind the endlessly surprising things that animals do. . . . [A] 'must have' for anyone who thinks in terms of physics about the way animals work."—C. J. Pennycuick, Trends in Ecology and Evolution

"The lack of a comprehensive text has been the source of substantial frustration to those who teach courses in animal locomotion. It is a great pleasure, then, to see the publication of this book. It is poised to become an instant classic and will undoubtedly serve as the central source of distilled wisdom on the subject for many years to come."—Mark Denny, Stanford University

"One of the major gaps in the literature of biomechanics is a general textbook on animal locomotion, and it is difficult to imagine anyone better suited to write one than Alexander. He is a leading researcher, and his books always convey the interest and excitement of his field to a broad audience. I look forward to using this book in my own classes."—Robert Dudley, University of California, Berkeley

"This is unique, important, and useful synthesis that brings together an analysis of locomotion on land, in water, and in the air. There is no other contemporary book on animal locomotion that is as broad in scope, and I expect that it will become a classic in the field."—Thomas J. Roberts, Oregon State University