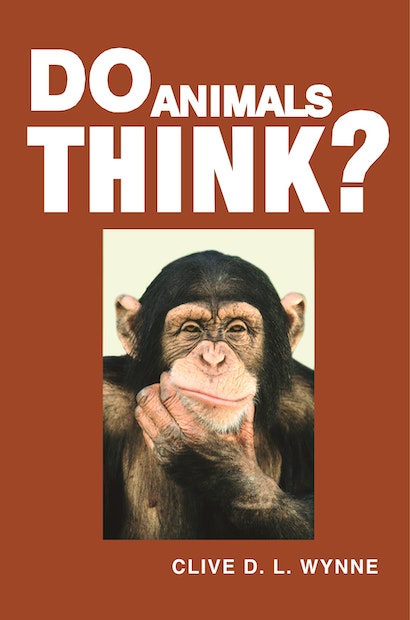 Does your dog know when you’ve had a bad day? Can your cat tell that the coffee pot you left on might start a fire? Could a chimpanzee be trained to program your computer? In this provocative book, noted animal expert Clive Wynne debunks some commonly held notions about our furry friends. It may be romantic to ascribe human qualities to critters, he argues, but it’s not very realistic. While animals are by no means dumb, they don’t think the same way we do. Contrary to what many popular television shows would have us believe, animals have neither the “theory-of-mind” capabilities that humans have (that is, they are not conscious of what others are thinking) nor the capacity for higher-level reasoning. So, in Wynne’s view, when Fido greets your arrival by nudging your leg, he’s more apt to be asking for dinner than commiserating with your job stress.


That’s not to say that animals don’t possess remarkable abilities — and Do Animals Think? explores countless examples: there’s the honeybee, which not only remembers where it found food but communicates this information to its hivemates through an elaborate dance. And how about the sonar-guided bat, which locates flying insects in the dark of night and devours lunch on the wing?


Engagingly written, Do Animals Think? takes aim at the work of such renowned animal rights advocates as Peter Singer and Jane Goodall for falsely humanizing animals. Far from impoverishing our view of the animal kingdom, however, it underscores how the world is richer for having such a diversity of minds — be they of the animal or human variety.

Clive D.L.Wynne is Associate Professor of Psychology at the University of Florida. He is the author of Animal Cognition: The Mental Lives of Animals

"[An] enjoyably written exploration of recent discoveries of modern animal behavior. . . . Wynne is clearly arguing against the view of animal rights advocates such as Peter Singer and Jane Goodall who ascribe human attributes to animals. But Wynne is no reactionary—he strongly sympathizes with those who wish to improve the treatment of animals. . . . It helps his arguments that Wynne is often as entertaining as he is erudite."—Publishers Weekly

"In this critical account of selected research, Clive Wynne takes aim at over-sentimental anthropomorphism, particularly on the part of animal-rights advocates. He argues that the degree to which animals are like us cannot be the measure of how much they are worthy of our respect and protection. . . . All this material is presented in a clear informal and entertaining way, enlivened by historical asides."—Sara J. Shettleworth, Nature

"Wynne has a pleasant writing style and a knack for engaging the reader. . . . [H]is book offers many insightful descriptions of animal behavior. . . . He seems to take delight in animals, and possesses great knowledge about them, yet he prefers them at arm's length. The constant message is that animals are not people."—Frans B.M. de Waal, Natural History

"Wynne's new book provides a timely corrective to many myths about animal minds, without detracting from the wonders of the natural world."—Nicola S. Clayton, Science

"[Wynne] is a lively writer with a congenial sense of humor, an obvious passion for truly understanding the minds of animals, and a sincere desire to come to terms with what all this means for the larger philosophical and ethical questions about the place of man and animals in the world."—Stephen Budiansky, Cerebrum: The Dana Forum on Brain Science

"A fun read . . . packed with clever experiments, intriguing anecdotes, and a delight in the diversity of animal behavior."—Sy Montgomery, Discover

"Readers will delight in this insightful, well-referenced book."—Choice

"Lucid and witty. . . . Mr. Wynne makes a compelling case against true rationality in animals, but he resists the temptation to reduce animals to mere 'machines,' as Descartes famously did; he is too seized with wonder at the marvels of animal behavior to adopt so barren a model. In the end, Mr. Wynne prefers to accept our fellow animals for what they are, as they are."—Eric Ormsby, New York Sun

"An intelligent and balanced discussion of our attitudes towards other species and what (if anything) animals think. . . . A refreshingly skeptical and pugnacious investigation."—P.D. Smith, The Guardian

"Wynne's expert, lucid, sharply argued (and even witty) study provides a wonderful account of what is understood about how animals think and the serious challenges that face scientific study of these fascinating questions. It also offers very reasonable and suggestive thoughts about the place of humans within the rich and complex world of mental achievements and limitations."—Noam Chomsky, Massachusetts Institute of Technology

"I had more fun reading this book than I have had from any other book in a long time! It is clever, erudite, and accessible."—Jonathan Marks, University of North Carolina, Charlotte

"Clive Wynne has written a vitally important book. A fascinating and authoritative account of the latest research on animal minds, Do Animals Think? is also a much-needed corrective to the half-truths, exaggerations, and fairy tales that have become all too common in this field."—Stephen Budiansky, author of If a Lion Could Talk: Animal Intelligence and the Evolution of Consciousness