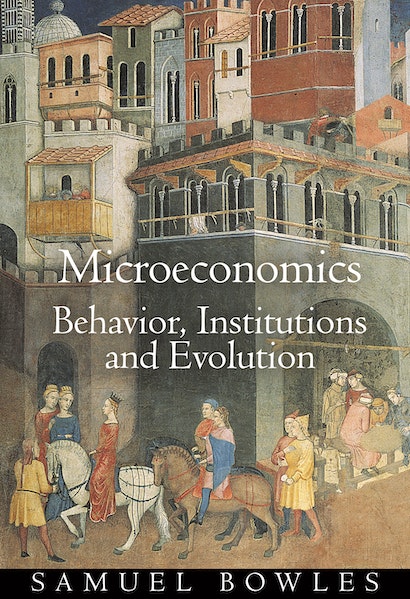 In this novel introduction to modern microeconomic theory, Samuel Bowles returns to the classical economists’ interest in the wealth and poverty of nations and people, the workings of the institutions of capitalist economies, and the coevolution of individual preferences and the structures of markets, firms, and other institutions. Using recent advances in evolutionary game theory, contract theory, behavioral experiments, and the modeling of dynamic processes, he develops a theory of how economic institutions shape individual behavior, and how institutions evolve due to individual actions, technological change, and chance events. Topics addressed include institutional innovation, social preferences, nonmarket social interactions, social capital, equilibrium unemployment, credit constraints, economic power, generalized increasing returns, disequilibrium outcomes, and path dependency.


Each chapter is introduced by empirical puzzles or historical episodes illuminated by the modeling that follows, and the book closes with sets of problems to be solved by readers seeking to improve their mathematical modeling skills. Complementing standard mathematical analysis are agent-based computer simulations of complex evolving systems that are available online so that readers can experiment with the models. Bowles concludes with the time-honored challenge of “getting the rules right,” providing an evaluation of markets, states, and communities as contrasting and yet sometimes synergistic structures of governance. Must reading for students and scholars not only in economics but across the behavioral sciences, this engagingly written and compelling exposition of the new microeconomics moves the field beyond the conventional models of prices and markets toward a more accurate and policy-relevant portrayal of human social behavior.

Samuel Bowles is Research Professor and Director of the Behavioral Sciences Program at the Santa Fe Institute and Professor of Economics at the University of Siena. He is coauthor of Notes and Problems in Microeconomic Theory (North Holland Texts in Mathematical Economics) and Schooling in Capitalist America (Basic Books), and has published articles, most recently, in the American Economic Review, Nature, the Quarterly Journal of Economics, the Economic Journal, and the Journal of Theoretical Biology.

"There must be dozens of introductory books with the word 'microeconomics' in the title, but for ambition alone Samuel Bowles's volume stands out. Not only does Bowles convey the elements of the conventional theory of capitalist economics—he offers a wealth of cutting-edge material as well . . . . [His] theory is neat, thought-provoking, and highly original—as is much else in this most unusual take on microeconomics."—Eric Maskin, Science

"This important and highly impressive volume is intended as an overview of cutting-edge developments in microeconomics for graduate students. . . . The work is well written and carefully structured. . . . [T]his is a very fertile and inspiring book, of much broader use than its intended audience. . . . Its analytical accounts of institutional structures and its masterly fusion of institutional and evolutionary themes might eventually warrant its status as a modern classic."—Geoffrey M. Hodgson, Economics and Philosophy

"Sam Bowles reminds the student from the first page to the last that microeconomic theory is an attempt to understand economic institutions in order to inspire us to improve the world. This book may be a turning point in bringing economics back to its real political economic roots."—Ariel Rubinstein, Tel Aviv University and Princeton University

"The standard neoclassical competitive model of economic behavior has been significantly extended in the last fifty years by emphasis on interaction among small groups (game theory), on extended models of human motivation based in part on human evolution, and on divergent information bases of participants. A rich but scattered literature has now received a brilliant synthesis and development in Samuel Bowles's new book. Microeconomics will be an indispensable part of future teaching in microeconomics at the graduate or advanced undergraduate levels, as well as an excellent source of information for the practicing economist."—Kenneth J. Arrow

"Homo economicus is dead, but whose Homo behavioralis will replace him? For those who care, this sustained and honest attempt to explore the implications for economic theory of one of the leading candidates is essential reading."—Ken Binmore, University College London

"An important and highly original book that shows how an evolutionary version of microeconomics can be brought to bear on central questions of economic growth and organization."—Peyton Young, Johns Hopkins University

"This is one of the most engaging books of its kind that has been written, intellectually challenging and a pleasure to read. It presents an innovative and unconventional perspective on microeconomics and, as such, is a book that many will want to teach from—I will."—Kaushik Basu, Cornell University

"Bowles does a masterful job of expanding the boundaries of received microeconomic theory by drawing upon cutting edge ideas from behavioral and experimental economics, evolutionary game theory, and the new institutional economics. I don't know of anyone who has woven such a wide range of literature into an equally coherent vision of post-Walrasian microeconomic theory."—Gregory Dow, Simon Fraser University