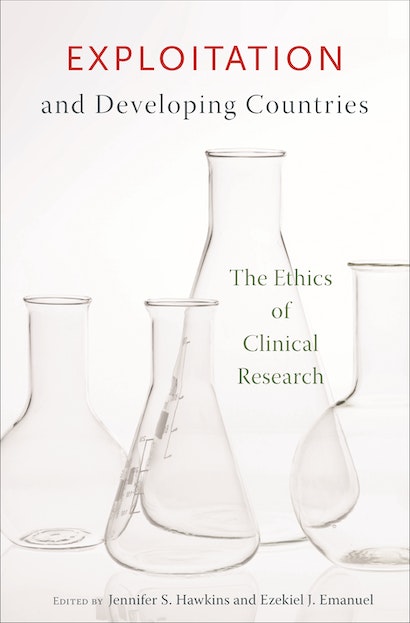 When is clinical research in developing countries exploitation? Exploitation is a concept in ordinary moral thought that has not often been analyzed outside the Marxist tradition. Yet it is commonly used to describe interactions that seem morally suspect in some way. A case in point is clinical research sponsored by developed countries and carried out in developing countries, with participants who are poor and sick, and lack education. Such individuals seem vulnerable to abuse. But does this, by itself, make such research exploitative?

Exploitation and Developing Countries is an attempt by philosophers and bioethicists to reflect on the meaning of exploitation, to ask whether and when clinical research in developing countries counts as exploitative, and to consider what can be done to minimize the possibility of exploitation in such circumstances. These reflections should interest clinical researchers, since locating the line between appropriate and inappropriate use of subjects — the line between exploitation and fair use — is the central question at the heart of research ethics. Reflection on this rich and important moral concept should also interest normative moral philosophers of a non-Marxist bent.

Jennifer S. Hawkins is assistant professor of philosophy at the University of Toronto. Ezekiel J. Emanuel is chairman of the Department of Bioethics at the Clinical Center of the National Institutes of Health.

"It is clear from these essays that the mores of western bioethics are often inadequate or ill-defined to meet the research needs of developing countries; without closer long-term interaction of this kind, leading to mutual understanding between rich and poor countries, it will be difficult to make further progress in this critically important field."—The Lancet

"The writing style is consistently concise, the arguments are well developed, and the authors stay on topic. . . . Though this book is demanding, I recommend reading it in its entirety if possible. Each author has a unique approach to the problem of exploitation in research in the developing world, and the reader needs to take in all aspects of this nuanced problem in order to understand it."—Carmen Paradis, New England Journal of Medicine

"Editors Hawkins and Emanuel, along with notable philosophers and bioethicists serving as contributors, tackle theoretical and practical issues relating to the ethics of clinical research carried out in the developing world. . . . The quality of the essays and the timeliness of the issues might make it suitable even for some general readers, especially those with an interest in issues relating to social justice."—M.W. Sontag, Choice

"The essays in this volume are uniformly strong, and those with an interest in the topic will profit from reading it cover to cover. On the whole, the book exhibits a firm command of the facts that pertain to international clinical research and an unusually high level of theoretical sophistication."—Lynn A. Jansen, IRB: Ethics and Human Research

"This is an outstanding contribution to the growing literature on the ethics of research with human subjects, and a fine example of what bioethics can offer at its best. Anyone with a serious interest in these issues will need to read this book from start to finish."—Daniel Wikler, Harvard School of Public Health

"This book contributes significantly to the literature on exploitation in clinical research conducted in the developing world."—Patricia Marshall, Case Western Reserve University