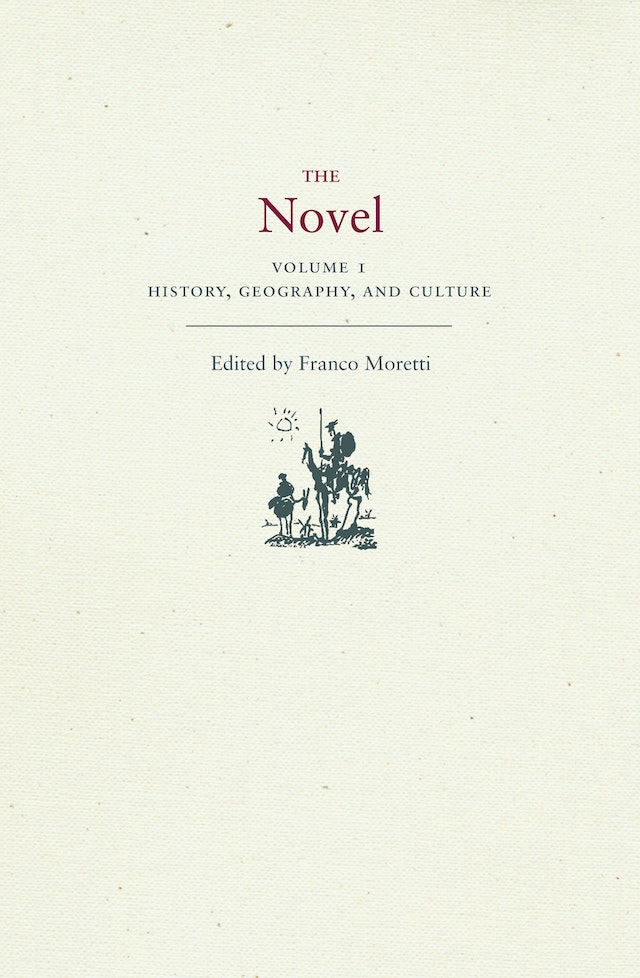 Nearly as global in its ambition and sweep as its subject, Franco Moretti’s The Novel is a watershed event in the understanding of the first truly planetary literary form. A translated selection from the epic five-volume Italian Il Romanzo (2001-2003), The Novel’s two volumes are a unified multiauthored reference work, containing more than one hundred specially commissioned essays by leading contemporary critics from around the world. Providing the first international comparative reassessment of the novel, these essential volumes reveal the form in unprecedented depth and breadth — as a great cultural, social, and human phenomenon that stretches from the ancient Greeks to today, where modernity itself is unimaginable without the genre.


By viewing the novel as much more than an aesthetic form, this landmark collection demonstrates how the genre has transformed human emotions and behavior, and the very perception of reality. Historical, statistical, and formal analyses show the novel as a complex literary system, in which new forms proliferate in every period and place.


Volume 1: History, Geography, and Culture, looks at the novel mostly from the outside, treating the transition from oral to written storytelling and the rise of narrative and fictionality, and covering the ancient Greek novel, the novel in premodern China, the early Spanish novel, and much else, including readings of novels from around the world.


These books will be essential reading for all students and scholars of literature.

Franco Moretti is Professor of English and Comparative Literature at Stanford University, where he founded the Center for the Study of the Novel. He is the author of Signs Taken for Wonders, The Way of the World, Modern Epic, Atlas of the European Novel 1800-1900, and Graphs, Maps, Trees.

"The most crucial aspect of the Il romanzo project is the idea driving it to see literature globally, to free 'the novel' from its modernist, strictly Western center of emergence and consider instead how the form has mutated around the world, and why."—Emilie Bickerton, Bookforum

"It's a rare literary critic who attracts so much public attention, and there's good reason: few are as hell-bent on rethinking the way we talk about literature. . . . There's no question that people will still be talking about these volumes twenty-five years from now."—Eric Bluson, Times Literary Supplement

"Moretti and his contributors have succeeded in making the study of the novel—if not the entire 'literary field'—'longer, larger and deeper' than it was before, or than any single scholar could ever make it."—David Trotter, London Review of Books

"[A] very ambitious collection . . . . The Novel is an impressive achievement, and precisely because Moretti was so willing to include perspectives that diverge sharply from his own."—William Deresiewicz, Nation

"Praise for Italian edition: "There are books that you read and reread, others that you consult when useful or just for the pleasure . . . [The Novel] belongs to both categories because it is much more than a mere collection of essays on a specific subject (in this case, the novel as literary genre, reinterpreted through contributions by novelists, critics, philosophers, anthropologists, and historians from every part of the world). Its changing, evocative flavors are so mouthwatering that it is like a platter of tapas, the little appetizers served by Catalans before a meal, which often take the place of an entire meal. The topic is books—a continuous game of citations and reflections. From the outset, it gives the reader symptoms of an ancient hunger. We are not sure what pushes us to read it and we try to grab and hold on to as much of it as possible . . . [The Novel] is not a book. It is a Pantagruelian feast that awakens limitless appetites. It helps to remind us how many flavors can be found in literature and—above all—how many we have lost by eating fast food for the brain.""—Diego De Silva, Il Mattino

"Praise for Italian edition: "[The Novel is a] heroic attempt to capture the great animal of words that we call The Novel. The hunting strategy employed by Franco Moretti and his contributors proves complex and articulated but at the same time oblique and diversified. A merely systematic work could never handle this subject. Neither could a totally anarchic approach . . . This work is destined to occupy an important place in contemporary reflections on the novel and on narrative forms in general. The essays are agile but not superficial, specialized but readable, and current . . . More than anything else, [The Novel] arouses one's desire to read and reread literary works.""—Dario Voltolini, La Stampa

"Praise for Italian edition: "[These] interesting, useful books . . . are not humble, simply informative manuals: they offer essays that lead in multiple directions and examine fundamental problems and questions. They assess the breadth of current studies and they establish an analytical horizon for advanced contemporary culture.""—Giulio Ferrot, L'Unita

"When you open The Novel . . . you may think you know what a novel is; by the time you close it . . . you are no longer sure. . . . The sheer diversity of topics here is exciting and opens up many new horizons. . . . It is impossible to understand why the novel has been the quintessential modern art form, and why it has appealed to writers and readers around the globe, without understanding the circumstances of its rise in Western Europe in the 18th century. . . . [I]t helped to incarnate the modern sensibility, and to teach its readers what it means to be modern. . . . If the novel is indeed losing its central position in our imaginative life . . . it can only be because modernity itself is slipping away, with all it distinctive promise and menace."—Adam Kirsch, The New York Sun

"This two-volume set is the most important resource on the novel now available. Like the novel itself, this work spans the globe and the centuries. . . . Essential."—Choice

"No reader will come away from these volumes without a long list of novels they now want to read—novels, in many cases, well-known within their own linguistic or national tradition but unfamiliar outside of it. . . . [This is] a project so capacious, so audacious, so polyvocal—in a word, so novel."—Leah Price, Novel: A Forum on Fiction

"There is a great deal to relish here...Moretti and his contributors have succeeded in making the study of the novel—if not the entire 'literary field'—'longer, larger and deeper' that it was before, or than any single scholar could ever make it."—London Review Bookshop

"Hugely ambitious. . . . Explores fiction with a capaciousness that's exhilarating as well as eye-opening, as a galactic crew of critics swoop in on subjects ranging from ancient China to Toni Morrison."—Marina Warner, The New Statesman

"Moretti's ability in his own criticism to use a playful, informal style is quite remarkable; he quickly puts readers at ease as he calls into question a great deal of what they think they know about narrative. . . . In short, both the range and the content of these essays are exceptionally lively and dynamic, and the writing is sophisticated."—Brian Evenson, Novel: A Forum on Fiction