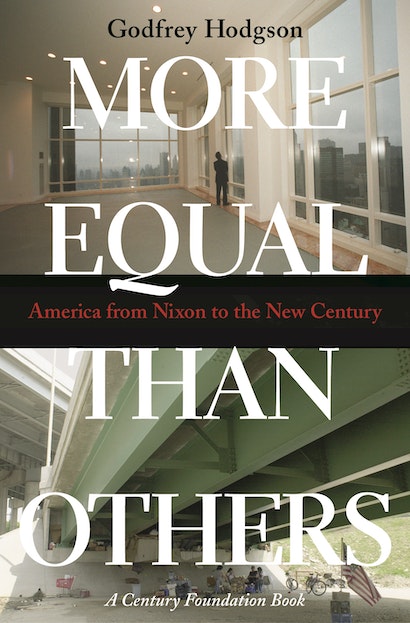 During the past quarter century, free-market capitalism was recognized not merely as a successful system of wealth creation, but as the key determinant of the health of political and cultural democracy. Now, renowned British journalist and historian Godfrey Hodgson takes aim at this popular view in a book that promises to become one of the most important political histories of our time. More Equal Than Others looks back on twenty-five years of what Hodgson calls “the conservative ascendancy” in America, demonstrating how it has come to dominate American politics.


Hodgson disputes the notion that the rise of conservatism has spread affluence and equality to the American people. Quite the contrary, he writes, the most distinctive feature of American society in the closing years of the twentieth century was its great and growing inequality. He argues that the combination of conservative ideology and corporate power and dominance by mass media obsessed with lifestyle and celebrity have caused America to abandon much of what was best in its past. In fact, he writes, income and wealth inequality have become so extreme that America now resembles the class-stratified societies of early twentieth-century Europe.

More Equal Than Others addresses a broad range of issues, with chapters on politics, the new economy, immigration, technology, women, race, and foreign policy, among others. A fitting sequel to the author’s critically acclaimed America In Our Time, More Equal Than Others is not only an outstanding synthesis of history, but a trenchant commentary on the state of the American Dream.

Godfrey Hodgson is an Associate Fellow at the Rothermere American Institute at Oxford University. He is the author of six books, including The Gentleman from New York: Daniel Patrick Moynihan: A Biography, People's Century, and America In Our Time (1976, Princeton 2005).

"In More Equal Than Others, an up-to-the-minute critique of modern American life, the British historian Godfrey Hodgson combines intelligent discussions of pressures that have shaped American society during the last quarter-century . . . With a factoid-packed jeremiad against the triumph of the suburb—the demographic zone where half the population now lives, where two-thirds of new jobs are located, whose voting strength overawes Congress. . . . Although Hodgson writes as a liberal, he levels [his] charges across party lines."—Allen D. Boyer, New York Times Book Review

"[A] wonderfully written, wide-ranging and profoundly depressing book. Hodgson's theme is that the US has changed for the worse in the past 25 years: inequality is supplanting equality, even equality of opportunity."—Kathleen Burk, Financial Times

"[Hodgson] sees a country which the postwar liberal consensus has indeed moved right, turning free-market capitalism from an economic theory into a cultural template. The result is an America in which financial segregation increasingly preserves opportunity for a wealthy elite. . . . [He] argues convincingly that American society has come to resemble old-fashioned Europe, with its strictly class-structured elites."—Michael Carlson, The Spectator

"The most thoughtful, thorough and sorrowful book imaginable on what has happened in these years."—Bernard Crick, The Independent

"Godfrey Hodgson . . . delivers a relentless indictment of an American grown . . . far too sure of itself. In More Equal Than Others, he argues that a wave of right-wing triumphalism has overtaken the country since the Soviet Union's death from exhaustion. In its train, it has brought us a sanctification of the unfettered market, an intensification of Americans' long-standing contempt for government, and—most appallingly—a complacent acceptance of unprecedented inequalities in wealth, education, and opportunity."—Matthew A. Crenson, Political Science Quarterly