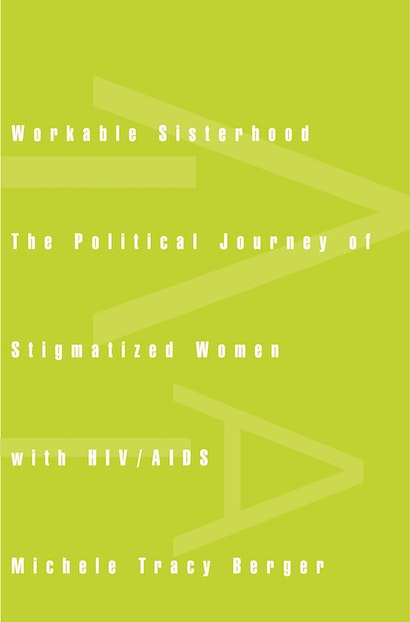 Workable Sisterhood is an empirical look at sixteen HIV-positive women who have a history of drug use, conflict with the law, or a history of working in the sex trade. What makes their experience with the HIV/AIDS virus and their political participation different from their counterparts of people with HIV? Michele Tracy Berger argues that it is the influence of a phenomenon she labels “intersectional stigma,” a complex process by which women of color, already experiencing race, class, and gender oppression, are also labeled, judged, and given inferior treatment because of their status as drug users, sex workers, and HIV-positive women.


The work explores the barriers of stigma in relation to political participation, and demonstrates how stigma can be effectively challenged and redirected.


The majority of the women in Berger’s book are women of color, in particular African Americans and Latinas. The study elaborates the process by which these women have become conscious of their social position as HIV-positive and politically active as activists, advocates, or helpers. She builds a picture of community-based political participation that challenges popular, medical, and scholarly representations of “crack addicted prostitutes” and HIV-positive women as social problems or victims, rather than as agents of social change. Berger argues that the women’s development of a political identity is directly related to a process called “life reconstruction.” This process includes substance- abuse treatment, the recognition of gender as a salient factor in their lives, and the use of nontraditional political resources.

"This work would be a stellar accomplishment by any seasoned scholar. That this is Berger's sociological 'debut' . . . is impressive and bodes well for future research into gender, inequality and deviance."—Tammy L. Anderson, Theoretical Criminology

"Michele Tracy Berger offers one of the first studies of the development of critical consciousness and political participation of women of color who are HIV positive. . . . Her study is one of the first that I have read that centers on the experiences and political practice of women of color who are HIV-positive and who also face other challenges, such as recovery from drug abuse and sexual trauma. . . . Her accessible writing style combined with the rich analytic framework contribute to the value of Workable Sisterhood for multiple audiences."—Nancy A. Naples, Perspectives on Politics

"While this work is situated primarily within the feminist literature, and particularly within the literature pertaining to women of color, it brought new emphasis to the significance of the relationship between social identity and stigma. . . . [T]his research . . . points to a possibility for change that resides within many individuals society has written off as lost."—Betsy L. Fife, American Journal of Sociology

"This work . . . brought new emphasis to the significance of the relationship between social identity and stigma. . . . [T]his research, which Berger found challenging throughout, points to a possibility for change that resides within many individuals society has written off as lost."—Betsy L. Fife, American Journal of Sociology

"An important contribution to the sociology of AIDS and to feminist writing concerning women who are multiply stigmatized by racism, poverty, sexual abuse, drug use, and gender."—Nancy Stoller, University of California, Santa Cruz, author of Lessons from the Damned: Queers, Whores, and Junkies Respond to AIDS

"Groundbreaking! Workable Sisterhood expands the discussion of the new face of HIV/AIDS in the U.S. and it introduces unique qualitative empirical data. I am unaware of any other book that enables the reader to hear firsthand women's personal stories of addiction, infection, and personal transformation. Berger's scholarship sets a feminist standard in work on stigmatized women by presenting such women as actors and thinkers, rather than victims and voiceless research data."—Julia Sudbury, Mills College, author of Other Kinds of Dreams: Black Women's Organizations and the Politics of Transformation