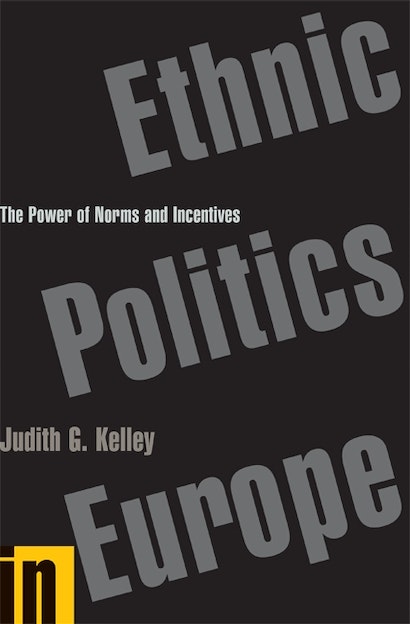 This detailed account of ethnic minority politics explains when and how European institutions successfully used norms and incentives to shape domestic policy toward ethnic minorities and why those measures sometimes failed.


Going beyond traditional analyses, Kelley examines the pivotal engagement by the European Union, the Organization for Security and Cooperation in Europe, and the Council for Europe in the creation of such policies.


Following language, education, and citizenship issues during the 1990s in Latvia, Estonia, Slovakia, and Romania, she shows how the combination of membership conditionality and norm-based diplomacy was surprisingly effective at overcoming even significant domestic opposition. However, she also finds that diplomacy alone, without the offer of membership, was ineffective unless domestic opposition to the proposed policies was quite limited.


As one of the first systematic analyses of political rather than economic conditionality, the book illustrates under what conditions and through what mechanisms institutions influenced domestic policy in the decade, preparing the way for the historic enlargement of the European Union.


This thoughtful and thorough discussion, based on case studies, quantitative analysis, and interviews with nearly one hundred policymakers and experts, tells an important story about how European organizations helped facilitate peaceful solutions to ethnic tensions — in sharp contrast to the ethnic bloodshed that occurred in the former Yugoslavia during this time. This book’s simultaneous assessment of soft diplomacy and stricter conditionality advances a long overdue dialogue between proponents rational choice models and social constructivists. As political requirements increasingly become part of conditionality, it also provides keen policy insights for the strategic choices made by actors in international institutions.

"There is no doubt that [this book] is a significant contribution to the literature on the management of ethnic conflict."—William Safran, Perspectives on Politics

"This excellent book shows convincingly that international institutions can affect state policies, particularly when membership and its rewards are contingent on conformity to institutional norms."—Robert O. Keohane, Princeton University

"Kelley's analysis is compelling, theoretically innovative, and empirically rich. By exploring not only cases where international institutions have an impact, but also instances where they fail, she shows how the international community has been able to bring about progressive change. This book fills an important gap."—Jeffrey T. Checkel, University of Oslo

"Kelley's terrific book moves us much closer to understanding how normative pressures and membership conditionality can move in tandem. Her creative quantitative methods establish the main determinants of post-communist policy choice, and her careful case studies tease out a wealth of further causal connections."—Wade Jacoby, Brigham Young University

"A well-researched book written by an author who is well acquainted with the details of the negotiations between the European Union and candidate countries."—Ilya Prizel, University of Pittsburgh