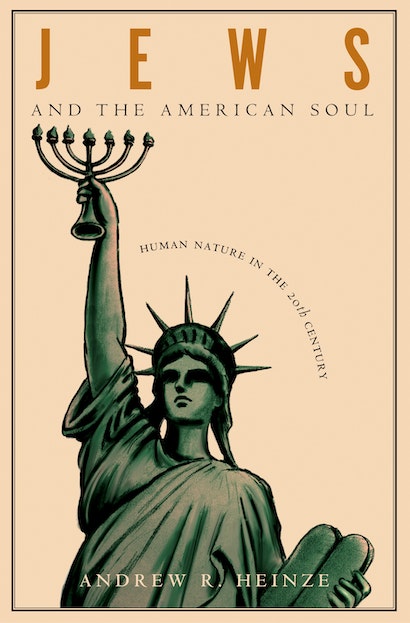 What do Joyce Brothers and Sigmund Freud, Rabbi Harold Kushner and philosopher Martin Buber have in common? They belong to a group of pivotal and highly influential Jewish thinkers who altered the face of modern America in ways few people recognize.


So argues Andrew Heinze, who reveals in rich and unprecedented detail the extent to which Jewish values, often in tense interaction with an established Christian consensus, shaped the country’s psychological and spiritual vocabulary.

Jews and the American Soul is the first book to recognize the central role Jews and Jewish values have played in shaping American ideas of the inner life. It overturns the widely shared assumption that modern ideas of human nature derived simply from the nation’s Protestant heritage.


Heinze marshals a rich array of evidence to show how individuals ranging from Erich Fromm to Ann Landers changed the way Americans think about mind and soul. The book shows us the many ways that Jewish thinkers influenced everything from the human potential movement and pop psychology to secular spirituality. It also provides fascinating new interpretations of Sigmund Freud, Alfred Adler, and Western views of the psyche; the clash among Protestant, Catholic, and Jewish moral sensibilities in America; the origins and evolution of America’s psychological and therapeutic culture; the role of Jewish women as American public moralists, and more. A must-read for anyone interested in the contribution of Jews and Jewish culture to modern America.

Andrew R. Heinze is Professor of American History and Director of the Swig Judaic Studies Program at the University of San Francisco. Raised in New Jersey, he graduated from Amherst College and earned a Ph.D. in History from the University of California, Berkeley. Andrew Heinze has written widely on history, religion, and current events and is the author of Adapting to Abundance.

"[A] groundbreaking, wonderfully researched and consistently provocative book. . . . Heinze has a fluid, readable style and supports his larger arguments and history with an abundance of compelling anecdotes and facts. . . . [He] writes splendid social history. This is an important addition not only to Jewish studies, but to American cultural studies as well."—Publishers Weekly

"Indeed, it is difficult to imagine the full history of [the] psychologization of American ideas about the psyche and human nature without considering the vast influence of Jewish writers. . . . This is a sharply argued contribution to American cultural and intellectual history that will deservedly be cited for decades to come."—Robert C. Fuller, American Historical Review

"Heinze's argument is that Christian America doesn't realize how Jewish it is. And while it would have been simple enough to round up the usual suspects . . . Heinze's choices are refreshing."—Joel Yanofsky, National Post

"[This] fascinating and innovative book could not have arrived at a better time. . . . The book deserves a wide readership."—Elaine Margolin, Jerusalem Post

"[O]utstanding . . . . Heinze cogently and elegantly traces the flow of Jewish values, attitudes, and arguments into the mainstream of American thought."—Ilana Mercer, Jewish Chronicle

"This ambitious undertaking raises many very interesting questions about the role of Jewish thinkers in exploring the American mind. Andrew Heinze presents 20th-century Jewish psychiatrists, psychologists, and rabbis who have never been included in discussions of this topic before."—Choice

"One of the more remarkable revelations of Andrew Heinze's Jews and the American Soul is . . . The interpenetration of the American and the Jewish outlook . . . Ranging from the thunderous impact of Freudianism through the popular ministrations and down-to-earth advice of Dr. Joyce Brothers. . . . Heinze writes well and often colorfully."—Charles Morris, Commonweal

"A major contribution. . . . Anyone interested in the afterlife of European psychology in America; anyone interested in the difference between Jewish and non-Jewish attitudes towards psychological structures needs to read this book. . . . You will find it a pleasure to read and you will learn something new on every page (and in virtually every footnote)."—Sander L. Gilman, American Jewish History

"Heinze makes an admirably detailed study of how Jews in America became party to the important discussion of the place of the psyche in the lives of Americans."—Edmund Connelly, The Occidental Quarterly

"Andrew R. Heinze's Jews and the American Soul: Human Nature in the Twentieth Century is a sweeping, ambitious study of Jewish contributions to Americans' self-understanding. . . . In his chronicle of Jews who have aided Americans in their search for meaning, Heinze has provided us with fascinating insights into the cultural work of many of these conversations."—Marjorie N. Feld, American Studies

"Why do Americans worry so about their souls? Andrew Heinze's amazing book offers an amazing answer—an extraordinary and unexpected dialogue among modern American Jewish writers and figures about the essence of humanity, the soul. Ranging across American Jewish writing on psychology, neurosis, self-help, humanism, and the Holocaust, Heinze explains how Jewish intellectuals uncovered and explicated the marrow of American identity even as, or precisely because, they sought to secure their place in an America that did not always want them. Heinze uplifts an unexpected, enlightening story with insight, grace, and not infrequent irony—a simply fascinating read."—Jon Butler, Yale University

"This telling of the American story gives a clarifying resonance to a heretofore muted theme. The nation's culture, politics, and civic religion have been powerfully influenced by Jewish contributions. But it has taken this vigorous work by Andrew Heinze to make them plain. This book will surely change the way America understands itself."—James Carroll, author of the bestselling Constantine's Sword

"Jews and the American Soul is the most forthright, probing, nuanced, and carefully documented book yet addressed to the ways in which modern American culture has been influenced by Jews. A truly distinctive work of American history."—David Hollinger, University of California, Berkeley

"I do not know any books like this one. Heinze concludes that Jewish ways of thinking about human personality and the meaning of human life have spread to millions of Americans. The implications of this conclusion are startling. A wonderful, compelling book, a major accomplishment. It has changed the way I think about the 'American soul.'"—Deborah Dash Moore, Vassar College

"Andrew Heinze's Jews and the American Soul is a shrewd and unsettling account of the influence of some surprising Jewish figures upon contemporary popular culture in the United States."—Harold Bloom, author of The Western Canon and The American Religion: The Emergence of the Post-Christian Nation