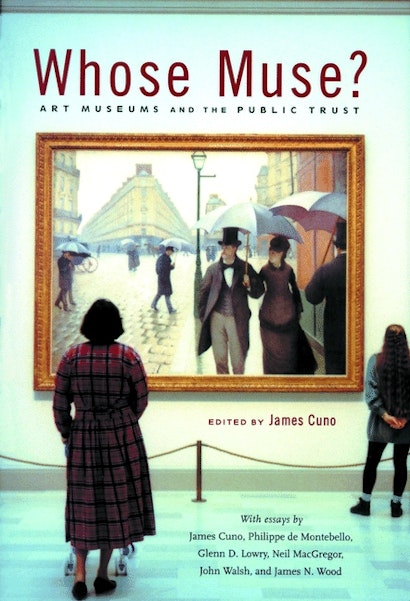 During the economic boom of the 1990s, art museums expanded dramatically in size, scope, and ambition. They came to be seen as new civic centers: on the one hand as places of entertainment, leisure, and commerce, on the other as socially therapeutic institutions. But museums were also criticized for everything from elitism to looting or illegally exporting works from other countries, to exhibiting works offensive to the public taste.

Whose Muse? brings together five directors of leading American and British art museums who together offer a forward-looking alternative to such prevailing views. While their approaches differ, certain themes recur: As museums have become increasingly complex and costly to manage, and as government support has waned, the temptation is great to follow policies driven not by a mission but by the market. However, the directors concur that public trust can be upheld only if museums continue to see their core mission as building collections that reflect a nation’s artistic legacy and providing informed and unfettered access to them.


The book, based on a lecture series of the same title held in 2000-2001 by the Harvard Program for Art Museum Directors, also includes an introduction by Cuno and a fascinating — and surprisingly frank — roundtable discussion among the participating directors. A rare collection of sustained reflections by prominent museum directors on the current state of affairs in their profession, this book is without equal. It will be read widely not only by museum professionals, trustees, critics, and scholars, but also by the art-loving public itself.

"These essays are rare treasures in the debate about contemporary museums. Each piece is rich in deep personal insight, much of it gained—one suspects—in a battle with the financial and political pressures faced by art museums at present. There is a generous feel to the book, such that it seems as though you are glimpsing that which would normally be hidden from public view. . . . Putting art back at the center of art museums will not be easy; this is the closest there is to a manifesto."—Josie Appleton, Times Literary Supplement

"An unusually thoughtful series of meditations on the fundamental purposes of museums and how they should serve their public by six of the world's leading museum directors. . . . Cumulatively, it becomes clear that these essays are an unusually soul-searching description of the core beliefs of the small group of men who run the major museums in Britain and America."—Charles Saumarez Smith, Spectator

"An eloquent and powerful statement of what one might call the traditional, or alternatively the true, objectives of the museum of art. Essential reading for the museum enthusiast."—Giles Waterfield, Art Newspaper

"Cuno is alarmed about the state of his profession. . . . The brilliant new book he has edited, Whose Muse, is a passionate argument for art museums to stop mimicking shopping malls and return to their primary purpose, an encounter between visitor and object."—Christine Temin, The Boston Globe

"A comprehensive and sometimes eloquent overview of many of the major issues of museums today, with special emphasis on the public's trust of museums, their authority, and their responsibilities to society. . . . Handsomely produced, this is a report from the front lines of one of the most important parts of American society today."—Choice

"For any museum visitor these revelations of what the museum directors think of what we think of them are fascinating, and sometimes shocking."—Maev Kennedy, Art Quarterly

"Clearly written and quite accessible, the papers in this volume will reinforce the traditional view of art museums held by many readers while also addressing recent challenges to the museum's legitimacy as a public institution."—Bruce J. Altshuler, Director, Program in Museum Studies, New York University