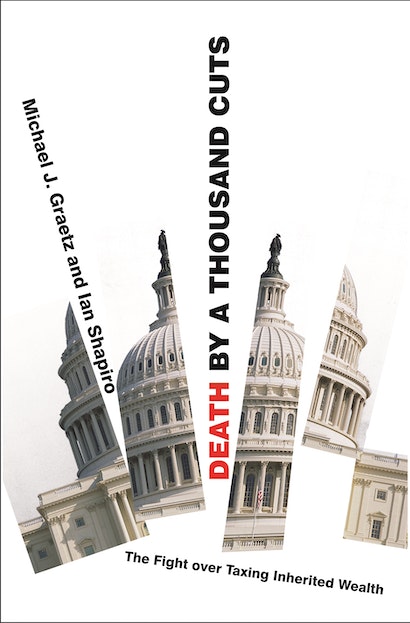 This fast-paced book by Yale professors Michael Graetz and Ian Shapiro unravels the following mystery: How is it that the estate tax, which has been on the books continuously since 1916 and is paid by only the wealthiest two percent of Americans, was repealed in 2001 with broad bipartisan support? The mystery is all the more striking because the repeal was not done in the dead of night, like a congressional pay raise. It came at the end of a multiyear populist campaign launched by a few individuals, and was heralded by its supporters as a signal achievement for Americans who are committed to the work ethic and the American Dream.


Graetz and Shapiro conducted wide-ranging interviews with the relevant players: members of congress, senators, staffers from the key committees and the Bush White House, civil servants, think tank and interest group representatives, and many others. The result is a unique portrait of American politics as viewed through the lens of the death tax repeal saga. Graetz and Shapiro brilliantly illuminate the repeal campaign’s many fascinating and unexpected turns — particularly the odd end result whereby the repeal is slated to self-destruct a decade after its passage. They show that the stakes in this fight are exceedingly high; the very survival of the long standing American consensus on progressive taxation is being threatened.


Graetz and Shapiro’s rich narrative reads more like a political drama than a conventional work of scholarship. Yet every page is suffused by their intimate knowledge of the history of the tax code, the transformation of American conservatism over the past three decades, and the wider political implications of battles over tax policy.

Michael J. Graetz is the Justus S. Hotchkiss Professor of Law at Yale University and one of America's foremost experts on tax policy. Ian Shapiro is Sterling Professor of Political Science and Henry R. Luce Director of the Yale Center for International and Area Studies at Yale University, and a leading political theorist.

"This is one of the most interesting books about politics, and power, and the way the world is going, that you are ever likely to read. What makes it so fascinating is that it is a mystery story. The mystery is this: how did the repeal of a tax that applies only to the richest 2 percent of American families become a cause so popular and so powerful that it steamrollered all the opposition placed in its way. . . . This is not simply a story about the United States. . . . [T]he moral of the tale is far wider than that. . . . Instead this is a tale about the power of narrative in politics, and the increasing ease with which individual stories can be made the be-all and end-all of political debate."—David Runciman, London Review of Books

"[Michael] Graetz . . . And [Ian] Shapiro . . . Set out to unravel what on the surface appears a mystery . . . Fueled a grassroots campaign that ended up throwing Democrats on the defensive. . . . Graetz and Shapiro make a convincing case that propaganda was not the chief reason the campaign to repeal the estate tax gathered steam. A far more important factor was that throughout the 1990s, the only people in Washington making impassioned moral arguments about it were antitax conservatives."—Eyal Press, The Nation

"Public-policy reporting at its finest. But Death by a Thousand Cuts is much more. It is also an important manual on moral arguments in contemporary politics."—David Cay Johnston, The American Prospect

"An elegant exegesis of the broad-based political forces that were brought together to fight against a tax that affects only the richest 1% to 2%. . . . There is a moral argument in favor of estate taxes that deserves to be heard above the clatter of the repeal juggernaut. This book is one of the first peeps in its defense."—Elizabeth Bailey, The New York Sun

"Death by a Thousand Cuts is a timely and important book. . . [I]t provides an enlightening and insightful account of the American political and tax systems."—Theodore Pollack, New York Law Journal

"Graetz and Shapiro are at their best when depicting the subterranean interplay between activists, think tanks, lobbyists, and donors that fuels federal politics."—Daniel Franklin, Washington Monthly

"How could a tax paid by only the richest 2 percent of Americans become a cause célèbre for a broad swath of middle-class farmers, businessmen and average Joes? [Graetz and Shapiro] provide a fascinating and readable explanation."—Jonathan Weisman, Washington Post

"The book is engaging, enlightening, and thought-provoking. . . . Graetz and Shapiro have written a remarkable book that deserves a wide audience. Their account of 'the fight over taxing inherited wealth' is notable not only for its sophisticated and penetrating analysis, but also for its scrupulous fairness."—Karen C. Burke and Grayson M.P. McCouch, Tax Notes

"Instead of rehashing the tired arguments about whether or not the estate tax should exist, these scholars undertook an incredible series of high-level interviews with the leading actors involved in this critical debate. The result is an easily accessible but highly insightful examination of the tax climate in early 21st century America. . . . Death by a Thousand Cuts clearly sounds a wake-up call to anyone who has not already seen how much the political center has shifted regarding the fundamental issues of what government should do and who should pay for it."—Richard L. Kaplan, National Tax Journal

"Here we are, in the midst of great affluence and a badly skewed distribution of income. Yet, somehow, efforts are well advanced to abolish the estate tax as a first step toward ending the century-old consensus on the idea of progressivity in taxation. Michael Graetz and Ian Shapiro tell in vivid detail the sad (at least to me) story of how that is happening."—Paul Volcker, former chairman of the Federal Reserve

"[A] compelling book—a story that should be read by everyone who wants to understand the new power players of the right and their next target: the income tax system itself. When two of America's best academics combine theory with shoe leather reporting, the results are splendid."—David Gergen, Kennedy School of Government, Harvard University; former White House adviser to presidents Nixon, Ford, Reagan, and Clinton.

"It's not about taxes, stupid. It's about politics! The book for Democrats who really want to know What's the Matter With Kansas?"—Sylvia Nasar, author of A Beautiful Mind

"Death By a Thousand Cuts is a marvelous book. I think of it as sort of a Moneyball for politics, with the role of Billy Bean played by Grover Norquist. The story of how Norquist and company pulled one over on the Democrats (and perhaps centrists of all stripes) is a great read. The book is certain to become a bible for inside-the-beltway readers, but it should be read by a very wide audience. The book changed the way I think about the politics of the estate tax debate. In fact, the book has changed my views about the politics of a number of related issues."—Joe Bankman, Stanford University School of Law

"How was the estate tax law overhauled? Why was the tax eliminated for those who die in 2010? Graetz and Shapiro tell the story with wit, verve, and insight. The authors avoid accounts that overvalue the role of rhetorical cleverness or individual greed. They show instead how repeal proponents, out to make their case, skillfully employed powerful narratives about moral principle. This brilliant book brings human drama to the arid domain of tax policy. It is essential reading for those who would influence future debates about progressive taxation and the American ideal of fair opportunity for all."—Jeffrey Lehman, President, Cornell University

"This is a terrific book—llively, well written, and razor sharp. Shapiro and Graetz take us on a splendid tour of American politics: out to visit policy entrepreneurs far from the beltway, over to the Washington players at the Heritage Foundation, and deep into the system in the workings of the congressional conference committees. This book is an intelligent person's Showdown at Gucci Gulch—far broader in its canvas's, deeper in its analysis, but just as gripping in its eye for telling political detail."—James Morone, author of Hellfire Nation