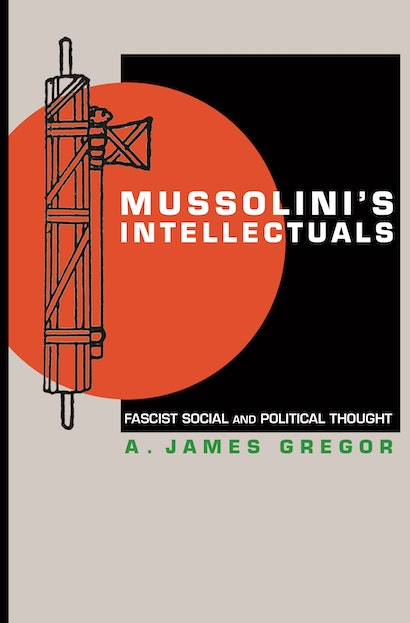 Fascism has traditionally been characterized as irrational and anti-intellectual, finding expression exclusively as a cluster of myths, emotions, instincts, and hatreds. This intellectual history of Italian Fascism — the product of four decades of work by one of the leading experts on the subject in the English-speaking world — provides an alternative account. A. James Gregor argues that Italian Fascism may have been a flawed system of belief, but it was neither more nor less irrational than other revolutionary ideologies of the twentieth century. Gregor makes this case by presenting for the first time a chronological account of the major intellectual figures of Italian Fascism, tracing how the movement’s ideas evolved in response to social and political developments inside and outside of Italy.


Gregor follows Fascist thought from its beginnings in socialist ideology about the time of the First World War — when Mussolini himself was a leader of revolutionary socialism — through its evolution into a separate body of thought and to its destruction in the Second World War. Along the way, Gregor offers extended accounts of some of Italian Fascism’s major thinkers, including Sergio Panunzio and Ugo Spirito, Alfredo Rocco (Mussolini’s Minister of Justice), and Julius Evola, a bizarre and sinister figure who has inspired much contemporary “neofascism.”


Gregor’s account reveals the flaws and tensions that dogged Fascist thought from the beginning, but shows that if we want to come to grips with one of the most important political movements of the twentieth century, we nevertheless need to understand that Fascism had serious intellectual as well as visceral roots.

A. James Gregor is Professor of Political Science at the University of California, Berkeley. He is the author of Italian Fascism and Developmental Dictatorship and The Fascist Persuasion in Radical Politics (Princeton), and The Faces of Janus: Marxism and Fascism in the Twentieth Century (Yale). He has been awarded the title Knight of the Order of Merit of the Republic by the Italian government for his publications on the history of Italy.

"The book succeeds admirably in convincing the reader that, far from being a doctrine based on irrationalism and violence, fascism's foundations are very sophisticated intellectual constructs."—Paul Petzschmann, Political Theory

"Professor Gregor is one of the rare specialists in Italian fascism to have made a truly original contribution to the study of the subject. His books always provide food for thought and are challenging, intelligent, clear and well written."—Zeev Sternhell, Hebrew University, Jerusalem

"This is the only account in either English or Italian of the formation of Italian Fascist thought over a period of forty years. Gregor is the leading specialist in this area in the English-speaking world. His work is strikingly original."—Stanley Payne, University of Wisconsin, Madison