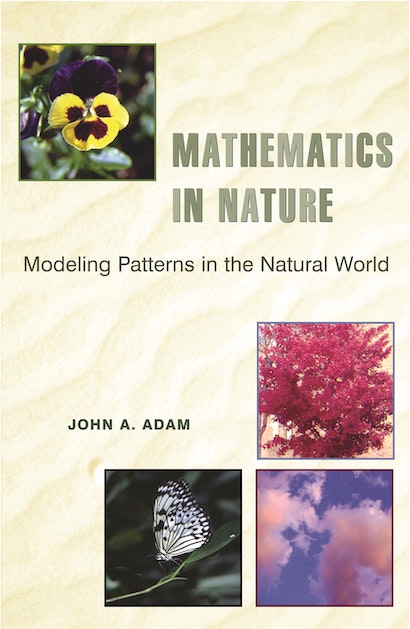 From rainbows, river meanders, and shadows to spider webs, honeycombs, and the markings on animal coats, the visible world is full of patterns that can be described mathematically. Examining such readily observable phenomena, this book introduces readers to the beauty of nature as revealed by mathematics and the beauty of mathematics as revealed in nature.


Generously illustrated, written in an informal style, and replete with examples from everyday life, Mathematics in Nature is an excellent and undaunting introduction to the ideas and methods of mathematical modeling. It illustrates how mathematics can be used to formulate and solve puzzles observed in nature and to interpret the solutions. In the process, it teaches such topics as the art of estimation and the effects of scale, particularly what happens as things get bigger. Readers will develop an understanding of the symbiosis that exists between basic scientific principles and their mathematical expressions as well as a deeper appreciation for such natural phenomena as cloud formations, halos and glories, tree heights and leaf patterns, butterfly and moth wings, and even puddles and mud cracks.


Developed out of a university course, this book makes an ideal supplemental text for courses in applied mathematics and mathematical modeling. It will also appeal to mathematics educators and enthusiasts at all levels, and is designed so that it can be dipped into at leisure.

John A. Adam is Professor of Mathematics at Old Dominion University, coeditor of A Survey of Models for Tumor-Immune System Dynamics, and a regular contributor to leading journals in applied mathematics.

"Mathematics in Nature is an excellent resource for bringing a greater variety of patterns into the mathematical study of nature, as well as for teaching students to think about describing natural phenomena mathematically. . . . [T]he breadth of patterns studied is phenomenal."—Will Wilson, American Scientist

"John Adam has combined his interest in the great outdoors and applied mathematics to compile one surprising example after another of how mathematics can be used to explain natural phenomena. And what examples! . . . [He] has done a great deal of reading and exposition, indulging his passions to create this compilation of mathematical models of natural phenomena, and the sheer number of examples he manages to cram into this book is testament to his efforts. There are other texts on the market which explore the connection between mathematics and nature . . . but none this wide-ranging."—Steven Morics, MAA Online

"Adam has laced his mathematical models with popular descriptions of the phenomena selected. . . . Mathematics in Nature can accordingly be read for pleasure and instruction by the select laity who are not afraid of reading between the lines of equations."—Philip J. Davis, SIAM News

"John Adam's quest is a very simple one: that is, to invite one to look around and observe the wonders of nature, both natural and biological; to ponder them; and to try to explain them at various levels with, for the most part, quite elementary mathematical concepts and techniques."—Brian D. Sleeman, Notices of the American Mathematical Association

"Reading this book progressively creates a course in mathematical modeling built around familiar, tangible, human-scale examples, with a trajectory that takes readers from dimensional estimates through geometrical modeling, linear and nonlinear dynamics, to pattern formation."—Choice

"John Adam's Mathematics in Nature illustrates how, in a friendly and lucid manner, mathematicians think about nature. Adam lets us see how mathematics is not only an ally, but is perhaps the very language that nature uses to express the beautiful. . . . This is a book that will challenge while it intrigues and excites."—Stanley David Gedzelman, Weatherwise

"Although Mathematics in Nature has not been written as a textbook, availability of such a manual shall help instructors who choose this delightful book for teaching a course in applied mathematics or mathematical modeling."—Yuri V. Rogovchenko, Zentralblatt Math

"Spanning a range of mathematical levels, this book can be used as an undergraduate textbook, a source of high school math enrichment, or can be read for pleasure by folks with an appreciation of nature but without advanced mathematical background."—Southeastern Naturalist

"Have you wondered how rainbows or sand dunes form? Does it puzzle you why drying mud forms polygonally shaped cracks? Can you explain the patterns on a butterfly's wings or how birds fly? In this delightful book, John Adam invites us to question and to share his enthusiasm for developing mathematical models to explore a wide range of everyday natural phenomena. Mathematics in Nature can be used as a text on mathematical modeling or as a book to dip into and encourage us to observe and wonder at the beauty of nature. It has the potential of becoming a classic."—Brian Sleeman, University of Leeds

"This is a book that I will want to keep close to hand so that I will not be stumped by all those seemingly simple yet subtle questions about nature: Why can fleas jump so high? Why is visibility better in rain than in fog? Why does a river meander? How high can trees grow? But it is much more than a compendium of useful facts and explanations. It is the clearest guide I have seen to the art of conceptualizing, simplifying, and modeling natural phenomena—no less than an exegesis on how good quantitative science is done."—Phillip Ball, Consultant Editor, Nature

"Mathematics in Nature leads the calculus-literate reader on a vigorous tour of nature's visible patterns—from the radiator-sailed dinosaur Dimetrodon to fracturing of dried mud and ceramic glazes, from the dispersion of rainbows and iridescence of beetles to the pearling of spider silk. Eschewing phenomena that are too small to see or too large to grasp, Adam shows how elementary college mathematics, rigorously applied, can give precise expression to everyday natural phenomena. His extraordinary range of examples and meticulous explanations document mathematics' wonderful capacity to describe and explain nature's patterns."—Lynn Arthur Steen, St. Olaf College

"This work is outstanding! The color photographs are beautiful. The writing style is splendid."—Robert B. Banks, author of Towing Icebergs, Falling Dominoes, and Other Adventures in Applied Mathematics

"This is a unique, even great book. It is in the spirit of a number of books on topics like symmetry and chaos that look at mathematics in the context of visually striking natural and other phenomena but is more broadly based. The author leads with the phenomena and follows with the math, making the book accessible to a wider audience while still appealing to math students and faculty."—Frank Wattenberg

"This is one of the best contemporary texts on the subject, appealing to a very broad audience that will definitely love this excellent book."—Yuri V. Rogovchenko, Zentralblatt Math (European Mathematical Society)