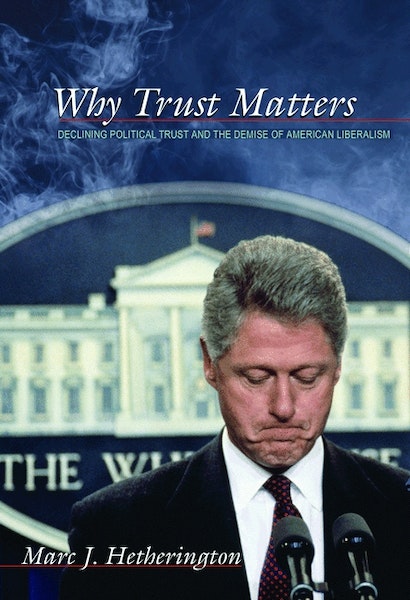 American public policy has become demonstrably more conservative since the 1960s. Neither Jimmy Carter nor Bill Clinton was much like either John F. Kennedy or Lyndon Johnson. The American public, however, has not become more conservative. Why, then, the right turn in public policy? Using both individual and aggregate level survey data, Marc Hetherington shows that the rapid decline in Americans’ political trust since the 1960s is critical to explaining this puzzle. As people lost faith in the federal government, the delivery system for most progressive policies, they supported progressive ideas much less. The 9/11 attacks increased such trust as public attention focused on security, but the effect was temporary.


Specifically, Hetherington shows that, as political trust declined, so too did support for redistributive programs, such as welfare and food stamps, and race-targeted programs. While the presence of race in a policy area tends to make political trust important for whites, trust affects policy preferences in other, non-race-related policy areas as well. In the mid-1990s the public was easily swayed against comprehensive health care reform because those who felt they could afford coverage worried that a large new federal bureaucracy would make things worse for them. In demonstrating a strong link between public opinion and policy outcomes, this engagingly written book represents a substantial contribution to the study of public opinion and voting behavior, policy, and American politics generally.

"Hetherington is making a marked reversal from the way the concept is typically treated by scholars. . . . This careful, multipronged approach yields a persuasive case for treating political trust as an independent variable with important ramifications for the study of public opinion and public policy."—Sean Aday, Public Opinion Quarterly

"Marc Hetherington['s] . . . wonderful new book . . . is recommended because it will spark many lively discussions that will remind readers what drew them to political science in the first place."—William Cunion, White House Studies

"Provocative, smoothly written, and supported by appropriate data, this is a first-rate book by a first-rate scholar. The message is timely and the thesis unique and believable."—John Hibbing, University of Nebraska, author of Stealth Democracy: Americans' Beliefs about How Government Should Work

"Why Trust Matters adds a new dimension to the study of trust in government by showing the consequences of prolonged political distrust on support for liberal social welfare policies. Hetherington shows that the decline in support is due not to increased conservatism in the population, but rather due to declining trust."—Samantha Luks, University of Minnesota