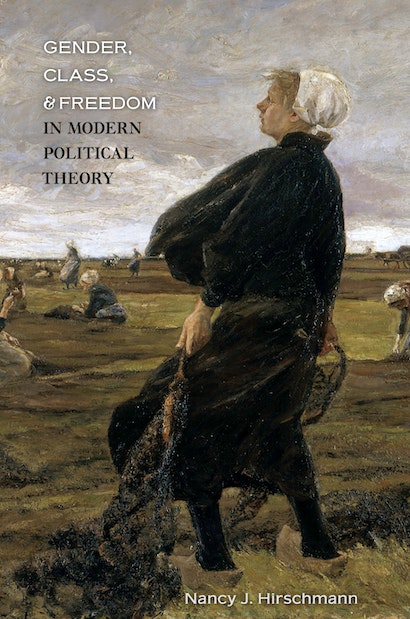 In Gender, Class, and Freedom in Modern Political Theory, Nancy Hirschmann demonstrates not merely that modern theories of freedom are susceptible to gender and class analysis but that they must be analyzed in terms of gender and class in order to be understood at all. Through rigorous close readings of major and minor works of Hobbes, Locke, Rousseau, Kant, and Mill, Hirschmann establishes and examines the gender and class foundations of the modern understanding of freedom. Building on a social constructivist model of freedom that she developed in her award-winning book The Subject of Liberty: Toward a Feminist Theory of Freedom, she makes in her new book another original and important contribution to political and feminist theory.


Despite the prominence of “state of nature” ideas in modern political theory, Hirschmann argues, theories of freedom actually advance a social constructivist understanding of humanity. By rereading “human nature” in light of this insight, Hirschmann uncovers theories of freedom that are both more historically accurate and more relevant to contemporary politics. Pigeonholing canonical theorists as proponents of either “positive” or “negative” liberty is historically inaccurate, she demonstrates, because theorists deploy both conceptions of freedom simultaneously throughout their work.

Nancy J. Hirschmann is the R. Jean Brownlee Endowed Term Professor in the Department of Political Science at the University of Pennsylvania. Her book The Subject of Liberty: Toward a Feminist Theory of Freedom (Princeton) won the 2004 Victoria Schuck Award for the best book on women and politics from the American Political Science Association.

"Hirschmann argues persuasively concerning the need for another discussion of the 'greats' of modern European political thought. She rereads Hobbes, Locke, Rousseau, Kant, and Mill and argues that rather than embracing positive or negative liberty, they use both simultaneously. She further argues that discussions of 'human nature' and the 'state of nature' in each are already rife with social constructivism. . . . Hirschmann profitably combines traditional interests . . . with newer scholarly interpretive methods and interests. Her discussion of Locke on positive liberty is a particularly valuable contribution. Clarity, readability, and helpful references to the secondary literature make this a useful volume for students grappling with these texts for the first time."—D. J. Lorenzo, Virginia Wesleyan College, for, Choice

"This text will be of interest primarily to students, scholars, and teachers of political theory and philosophy, who will appreciate Hirschmann's close, deep, and nuanced interpretations of canonical texts. . . . [H]er newest work will inspire and enable scholars who read it to participate effectively in contemporary discourses of freedom, especially on behalf of those who have been ignored and harmed in the name of freedom, even as they aspire to its enduring allure."—Christine Di Stefano, Politics and Gender

"Gender, Class, and Freedom in Modern Political Theory is an impressive piece of scholarship. At its heart are the five chapters devoted to each philosopher, each of which is rich in detail and nuanced argument. The book covers a great deal of ground. . . . [T]his book is written for those who already understand, or think they understand, the Western canon. It promises to change how this canon is conventionally understood. And it delivers on this promise."—Avigail Eisenberg, Perspectives on Politics

"This book is bound to have a wide audience among both political theorists and feminists. One of its strengths is its analysis of the way in which the theories of freedom of Hobbes, Locke, Rousseau, Kant, and Mill are gendered. Hirschmann argues pointedly with other feminist interpretations of these theories and she provides an unusually sophisticated feminist analysis of the canon."—Marion Smiley, Brandeis University

"This is a great book. Hirschmann's thorough discussion of freedom—though based on a close reading of only five theorists—will, in my opinion, change how we think about freedom. Hirschmann also demonstrates why all good political theory needs to be feminist—not ideologically, but methodologically feminist. Historians of political thought and theorists of freedom and feminism will find much to challenge and provoke their thinking."—Brooke Ackerly, Vanderbilt University