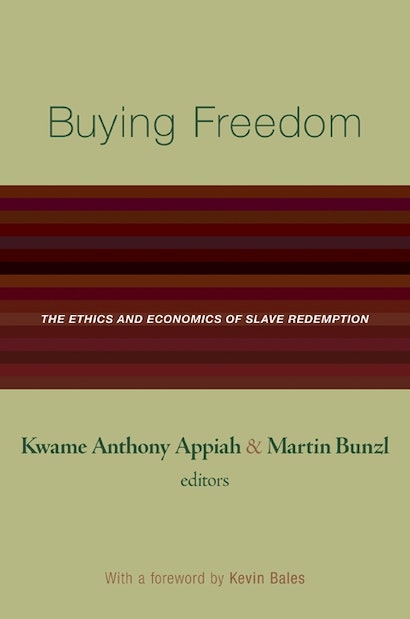 If “slavery” is defined broadly to include bonded child labor and forced prostitution, there are upward of 25 million slaves in the world today. Individuals and groups are freeing some slaves by buying them from their enslavers. But slave redemption is as controversial today as it was in pre-Civil War America. In Buying Freedom, Kwame Anthony Appiah and Martin Bunzl bring together economists, anthropologists, historians, and philosophers for the first comprehensive examination of the practical and ethical implications of slave redemption.


While recognizing the obvious virtue of the desire to buy the freedom of slaves, the contributors ask difficult and troubling questions: Does redeeming slaves actually increase the demand for — and so the number of — slaves? And what about cases where it is far from clear that redemption will improve the material condition, or increase the real freedom, of a slave?

Kwame Anthony Appiah is the Laurance S. Rockefeller University Professor of Philosophy at Princeton University. His books include Cosmopolitanism (Norton). Martin Bunzl is professor of philosophy at Rutgers University and the author of Real History: Reflections on Historical Practice.

"Slavery? In the modern world? Many readers will be shocked to read that human beings are still owned, bought, and sold. Editors Appiah and Bunzl present a series of essays documenting current slavery issues in a broad context as well as providing a historic context, analyzing some changes that have occurred in slave-based industries from the late 1700s to the present."—D. E. Mattson, Choice

"Buying Freedom is an instructive volume on the question whether slave redemption makes sense or not. The contributions cover the most varied methodological approaches, which is certainly an asset of the book."—Paul Ramskogler, Journal of Economic Issues

"How to end slavery in the twenty-first century? Should contemporary slaveholders be paid to let their victims go? These are the key questions addressed in Buying Freedom, one of the few books on the economics and ethics of contemporary slave redemption. And these questions are crucial not only for understanding how to root out chattel slavery and similar practices in a few remote countries. They have gained new urgency with the global spread of human trafficking and the growing awareness that different forms of forced labor still exist."—Patrick Belser, Economist, Special Action Programme to Combat Forced Labour, International Labour Organisation

"This excellent and thought-provoking collection raises both practical and moral questions about the important issue of slave redemption. Few people know that the numbers of slaves run into the millions and that so many are children. And I think few readers will anticipate that buying the freedom of slaves may bid up the price and end up causing more people to be enslaved. Fewer still will have wondered about what should be done."—Bernard R. Boxill, University of North Carolina, Chapel Hill