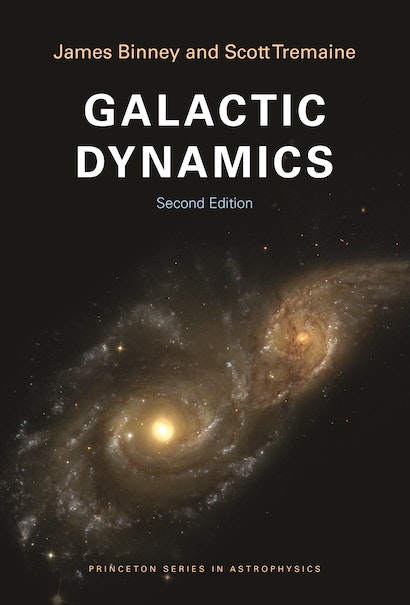 Since it was first published in 1987, Galactic Dynamics has become the most widely used advanced textbook on the structure and dynamics of galaxies and one of the most cited references in astrophysics. Now, in this extensively revised and updated edition, James Binney and Scott Tremaine describe the dramatic recent advances in this subject, making Galactic Dynamics the most authoritative introduction to galactic astrophysics available to advanced undergraduate students, graduate students, and researchers.


Every part of the book has been thoroughly overhauled, and many sections have been completely rewritten. Many new topics are covered, including N-body simulation methods, black holes in stellar systems, linear stability and response theory, and galaxy formation in the cosmological context. Binney and Tremaine, two of the world’s leading astrophysicists, use the tools of theoretical physics to describe how galaxies and other stellar systems work, succinctly and lucidly explaining theoretical principles and their applications to observational phenomena. They provide readers with an understanding of stellar dynamics at the level needed to reach the frontiers of the subject.


This new edition of the classic text is the definitive introduction to the field.

James Binney is professor of physics at the University of Oxford. His books include Galactic Astronomy. Scott Tremaine is the Richard Black Professor of Astrophysics at the Institute for Advanced Study and a member of the National Academy of Sciences. Both are fellows of the Royal Society.

"All astronomers and dynamicists should acquire and read this impressive book. It is both readable and rigorous: destined to become a classic landmark in the subject."—Times Higher Education Supplement

"[T]his book has no peers."—Nature

"[The] material is covered with care, rigor, and exemplary clarity; there is nothing obscure, sloppy, or superficial. The authors are, moreover, careful to make clear the limits of present knowledge, and to point out where conclusions cannot yet be drawn. . . . I expect it to stand as a classic reference for many years to come."—Richard B. Larson, American Scientist

"Binney and Tremaine have done a major service to astronomers and physicists alike by producing a magnificent book that will make this fascinating subject much more accessible. This is undoubtedly the best book from which to learn the subject."—Donald Lynden-Bell, Physics Today

"[A]n excellent book—big and fat, and containing everything you ever wanted to know about stellar dynamics. . . . This book must become a landmark in the field."—New Scientist

"Do make sure that you are familiar with this volume, for you will not be disappointed. James Binney and Scott Tremaine have done the astronomical community a great service in compiling this second edition. It is a masterpiece."—Michael Perryman, Planetary and Space Science

"[T]his is a great book, already evident from the fact that since its 1st edition nobody has attempted to rival it. It is an absolute must for everybody, from PhD students to senior researchers, whose studies touch upon the subject of galaxy dynamics. A great strength of this book . . . lies in Binney & Tremaine's ability to explain even the most complicated of concepts and arguments in a straightforward and logical way."—Walter Dehnen, The Observatory

"Grab yourself a copy of Galactic Dynamics and buckle up lads and lassies. Don't forget the protective head gear and the strong coffee—it's going to be one hell of a rough ride; but hang on there, and together we can boldly go where no man (or woman for that matter) has gone before."—Gerard Mc Mahon, Astronomy and Space Magazine

"The second edition of Galactic Dynamics is a successful revision of its 1987 predecessor and will long be a reference for those working on galaxies. Astronomers teaching advanced courses in galactic dynamics will also use it widely, in part because it includes an expanded collection of interesting and demanding problems for teaching and consolidation of the wealth of material presented in the book."—Ken Freeman, Physics Today

"Henceforth, one must have a copy of Binney and Tremaine's classic in order to do astrophysics. . . . We will all study from it and come to know it better than the Bible."—John N. Bahcall, Institute for Advanced Study