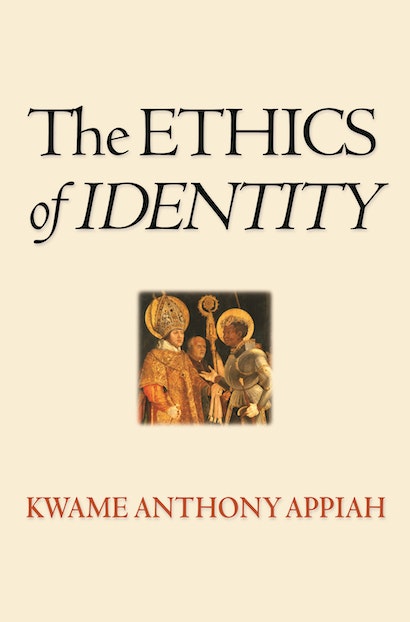 Race, ethnicity, nationality, religion, gender, sexuality: in the past couple of decades, a great deal of attention has been paid to such collective identities. They clamor for recognition and respect, sometimes at the expense of other things we value. But to what extent do “identities” constrain our freedom, our ability to make an individual life, and to what extent do they enable our individuality? In this beautifully written work, renowned philosopher and African Studies scholar Kwame Anthony Appiah draws on thinkers through the ages and across the globe to explore such questions.

The Ethics of Identity takes seriously both the claims of individuality — the task of making a life — -and the claims of identity, these large and often abstract social categories through which we define ourselves.


What sort of life one should lead is a subject that has preoccupied moral and political thinkers from Aristotle to Mill. Here, Appiah develops an account of ethics, in just this venerable sense — but an account that connects moral obligations with collective allegiances, our individuality with our identities. As he observes, the question who we are has always been linked to the question what we are.


Adopting a broadly interdisciplinary perspective, Appiah takes aim at the clichés and received ideas amid which talk of identity so often founders. Is “culture” a good? For that matter, does the concept of culture really explain anything? Is diversity of value in itself? Are moral obligations the only kind there are? Has the rhetoric of “human rights” been overstretched? In the end, Appiah’s arguments make it harder to think of the world as divided between the West and the Rest; between locals and cosmopolitans; between Us and Them. The result is a new vision of liberal humanism — one that can accommodate the vagaries and variety that make us human.

Kwame Anthony Appiah is Laurance S. Rockefeller University Professor of Philosophy and the Center for Human Values at Princeton University. His books include two monographs in the philosophy of language as well as the widely acclaimed In My Father's House: Africa in the Philosophy of Culture, Cosmopolitanism [Norton], and, with Amy Gutmann, Color Conscious: The Political Morality of Race. He has also edited or co-edited many books, including (with Henry Louis Gates, Jr.) Africana: The Encyclopedia of the African and African-American Experience. His most recent book is Thinking It Through: An Introduction to Contemporary Philosophy.

"The Ethics of Identity is wonderfully straightforward. It does just what it proposes to do. It explores the demands of 'individuality,' and rejects extreme understandings of what autonomy requires. It considers the relation of personal and group identity to morals and ethics. . . . It moves on to the links between identity and culture. . . . Appiah has some very wise and original things to say about the inevitability of a liberal state affecting the inner life of its citizens. He ends with a defense of rooted cosmopolitanism. Not only is the argument direct; it is untechnical, transparent, and unaggressive. . . . Appiah concentrates on a double question: how we acquire an individual identity by acquiring a social identity, and how we find—and make—an identity that is not a straitjacket. In pursuing this question, Appiah begins to explore one of the most fascinating and difficult questions in moral philosophy, the relationship between general principles and particular attachments. . . . [He] shows just how to write about the intimate, formative relations that are central to a life, most strikingly in his epilogue, but as you realize when you reach that ending, he has been doing it, as well as a great deal else, throughout The Ethics of Identity."—Alan Ryan, The New York Review of Books

"Suave and discerning. . . . Appiah seeks to reorient political philosophy by returning to the example set by John Stuart Mill. . . . For all of Appiah's philosophic precision, his writing often resembles not Mill's but that of Oscar Wilde—to my mind, the finest prose stylist of the 19th century. . . . [T]he superb rhetorical performance of this book offers the most persuasive evidence for his case. . . . To read The Ethics of Identity is to enter into the world it describes; it is also to imagine what it might be like to live in so urbane and expansive a place."—Jonathan Freedman, New York Times Book Review

"Kwame Anthony Appiah undertakes to combine a form of liberalism that aspires to universal validity with a full recognition and substantial acceptance of the important cultural and ethical diversity that characterizes our world."—Thomas Nagel, New Republic

"[An] impressive book. . . . [A] thorough exploration of moral concepts such as authenticity, tolerance, individuality, and dignity, and how they are all connected to the task of making a life. . . . It is hard to know what to admire most about this book: the urbane elegance of Appiah's prose, the reach of his knowledge, or the sheer philosophical sharpness of his analysis."—Carl Elliott, The American Prospect

"This book, with its fluid, inviting phrasing, is exceptionally well written. . . . It is effective, insightful, and thought-provoking. . . . Appiah clears the way for a justification of a narrative, pragmatic, particular relations-based cosmopolitanism, which is universal without the necessity of theoretical agreement."—Choice

"This new book aims to lay the groundwork for a new version of liberal theory adequate to the challenges of our time. . . . I find Appiah's overall conception of liberalism very congenial. . . . If Appiah succeeds in attenuating the force of such claims by undermining the theoretical conceptualizations and arguments supporting them, and integrating the valid claims of identity into liberal theory, he will have contributed very significantly to the reconstruction of liberalism."—Leonard J. Waks, Education and Culture

"The conclusion Appiah eloquently affirms is spot on: the key to living a moral life is clearly not to seek to forego identity. On the contrary, it is to put identity in the service of becoming ethical human beings."—Joshua Jelly-Schapiro, Tikkun

"Kwame Anthony Appiah, a man of multiple cultures and languages who is able to question culture itself, leaves us better able to contemplate how to lead life well and to relate ethically to others in the process."—E. James Lieberman, PsycCritiques

"Kwame Anthony Appiah's The Ethics of Identity is a wonderful book. It is as rigorous as one expects the best philosophy to be, yet it is whitty, humane, and engaging in ways that academic philosophy is only rarely. It is the best account of the ethics of liberal society that we possess."—Daniel Weinstock, Ethics

"Appiah, . . . an elegant writer, observes that we are not simply members of groups or products of culture. Individuality and autonomy, he argues, are fundamental to personhood in all social and cultural contexts."—David Moshman, Journal of Applied Developmental Psychology

"[This is] a book that does [a] thorough and original a job of exposing the deep paradoxes within identity and confronting the serious ethical dilemmas to which they give rise."—John E. Joseph, Journal of Multilingual and Multicultural Development

"Appiah has written a remarkably impressive book, one that makes a number of important advances on the existing literature and stands as an important contribution to political and moral philosophy and moral psychology. It will be very widely read."—Jacob Levy, University of Chicago

"The Ethics of Identity is a major overhaul of the vocabulary of contemporary political and critical thought—the vocabulary of identity, diversity, authenticity, cosmopolitanism, and culture. The load of hidden assumptions carried by these words had become overwhelming, and someone needed to take them to the shop and give them a thorough philosophical servicing. But Anthony Appiah has done more than that. He has returned those terms to us clarified, refreshed, and ready for use in a more sophisticated and flexible philosophy of Liberalism—and, along the way, he has provided us with a new reading of liberalism's old hero, John Stuart Mill. Appiah's writing is unparalleled in its elegance, its lucidity, and its humanity. Accept no substitutes."—Louis Menand, Harvard University

"In the debates over diversity, rights, group identities or group conflict, The Ethics of Identity, is the land of lucidity. Appiah's elegant book resists the easy alternatives of universal liberalism and multiculturalism and instead defends—and illustrates on every page—a rooted cosmopolitanism. The sparkling prose, vivid examples, and probing questions navigate the choppy waters of personal and political constructions of race, ethnicity, gender, religion, and sexuality. This fine and wise book invites readers to remain willing to distinguish tolerance and respect—and by engaging with both the lives people make for themselves and the communities and narratives that render them meaningful."—Martha Minow, Harvard Law School and author of Identity, Politics, and the Law