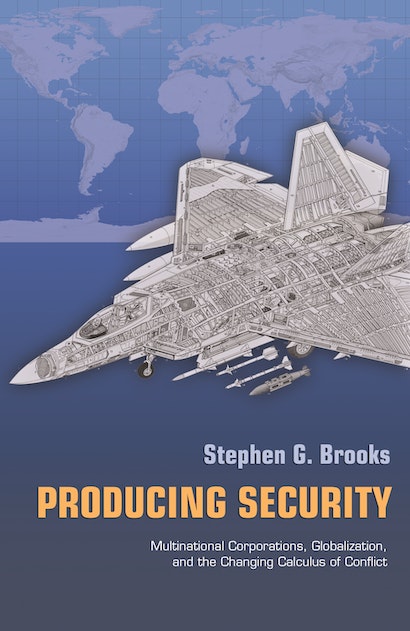 
In Producing Security, Stephen Brooks maintains that such an overarching focus on the security implications of trade once made sense but no longer does. Trade is no longer the primary means of organizing international economic transactions; rather, where and how multinational corporations (MNCs) organize their international production activities is now the key integrating force of global commerce.


MNC strategies have changed in a variety of fundamental ways over the past three decades, Brooks argues, resulting in an increased geographic dispersion of production across borders. The author shows that the globalization of production has led to a series of shifts in the global security environment. It has a differential effect on security relations, in part because it does not encompass all countries and industries to the same extent. The book’s findings indicate that the geographic dispersion of MNC production acts as a significant force for peace among the great powers. The author concludes that there is no basis for optimism that the globalization of production will promote peace elsewhere in the world. Indeed, he finds that it has a net negative influence on security relations among developing countries.

"An original and important work that all researchers concerned with the security implications of economic trends will want to read. Brooks's careful craftsmanship is evident from start to finish. Importantly, he forces our attention away from simple trade flows to the underlying forces of transnational production that will continue to have central consequences for global security in our age."—Brian M. Pollins, Perspectives on Politics

"[A] path-breaking book. . . . [T]his is an innovative, sound, systematic, and insightful volume for all those who are interested in the implications of economic globalization for interstate war and peace."—Quan Li, Ethics and International Affairs

"Producing Security is an important and timely work, and makes a compelling argument for the importance and economic consequences of the globalization of production . . . . [It] merits real praise for attempting to bridge the often all-too-wide gap between international political economy and security studies."—Tanisha M. Fazal, Political Science Quarterly

"A much welcomed addition to the security literature; indeed one of the more innovative in recent memory."—Darryl S.L. Jarvis, Australian Journal of Public Affairs

"Overall, this is a sensible and thoughtful contribution to the international relations literature. Brooks is to be congratulated for being willing to engage with the realities of the contemporary global economy, and to put forth bold theories about their security implications."—Geoffrey Jones, International History Review

"Stephen Brooks has quickly emerged as an original and persuasive voice among international security experts. One reason for this rapid ascent is his sophisticated understanding of international economics and its effects on global politics. This remarkable book breaks outside the confines of the longstanding does-trade-promote-peace? debate to explore the impact of the rise of multinational firms on security affairs—arguably the most important facet of contemporary globalization. Brooks comes to powerful and provocative conclusions about the end of the cold war, great power stability, and security relations among developing countries. Scholars and policymakers alike will be influenced by Brooks' approach and will have to contend with his arguments for years to come."—Geoffrey Garrett, University of California, Berkeley

"Brooks has produced a significant and well-crafted book that addresses an age-old debate in international relations and succeeds in saying something new."—G. John Ikenberry, Princeton University