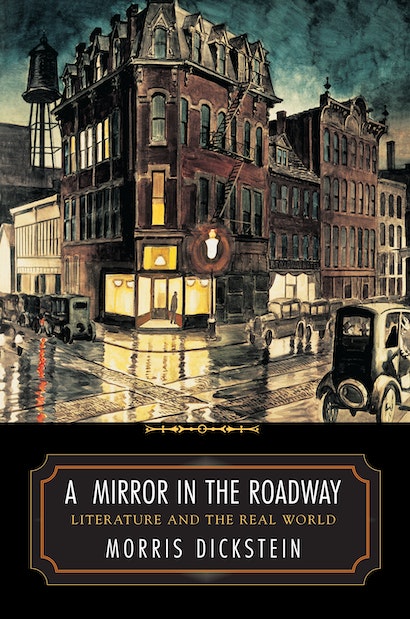 In a famous passage in The Red and the Black, the French writer Stendhal described the novel as a mirror being carried along a roadway. In the twentieth century this was derided as a naïve notion of realism. Instead, modern writers experimented with creative forms of invention and dislocation. Deconstructive theorists went even further, questioning whether literature had any real reference to a world outside its own language, while traditional historians challenged whether novels gave a trustworthy representation of history and society.

In this book, Morris Dickstein reinterprets Stendhal’s metaphor and tracks the different worlds of a wide array of twentieth-century writers, from realists like Theodore Dreiser, Sinclair Lewis, Edith Wharton, and Willa Cather, through modernists like Franz Kafka and Samuel Beckett, to wildly inventive postwar writers like Saul Bellow, Günter Grass, Mary McCarthy, George Orwell, Philip Roth, and Gabriel García Márquez. Dickstein argues that fiction will always yield rich insight into its subject, and that literature can also be a form of historical understanding. Writers refract the world through their forms and sensibilities. He shows how the work of these writers recaptures — yet also transforms — the life around them, the world inside them, and the universe of language and feeling they share with their readers.

Through lively and incisive essays directed to general readers as well as students of literature, Dickstein redefines the literary landscape — a landscape in which reading has for decades been devalued by society and distorted by theory. Having begun with a reconsideration of realism, the book concludes with several essays probing the strengths and limitations of a historical approach to literature and criticism.

Morris Dickstein (1940–2021) was Distinguished Professor of English at the City University of New York Graduate Center and a widely published literary and cultural critic. His work has appeared in the New York Times Book Review, the Times Literary Supplement, Partisan Review, The Nation, and the Chronicle of Higher Education. His books include Gates of Eden: American culture in the 1960's, which was nominated for a National Book Critics Circle Award in criticism, and Leopards in the Temple, a study of postwar American fiction.

"Dickstein paints in broad strokes, providing brief biographical portraits of a diverse group of writers and their cultural moments. The essays on Bellow and Fitzgerald are especially fine. . . . The ability of the imagination to constitute an interpretable but nevertheless real world is, for Dickstein, the core of literary work."—The New Yorker

"Moving from Melville to Bellow, from Wharton to Roth, Dickstein follows the novel's progress and the trends of literary theory to show that every period produces a literature that reflects something essential about the age."—Ron Charles, Washington Post Book World

"A firm traditionalist, Dickstein takes issue with deconstructive theorists, who see literature as a separate, self-referential world of language, and with new historicists who deny fiction its integrity by grounding it too stubbornly in a social context that may not be relevant to the writer's purposes. . . .The best pieces engage in a quirky and personal way with their subjects."—Madeleine Minson, Times Higher Education Supplement

"Beginning with how American writers like Whitman, Melville, Wharton, Ellison and Bellow variously depicted life in New York City, literary critic Dickstein examines an array of authors in relation to their historical moments and explores the significance of how they represented their worlds. . . . [He] makes a case for the social awareness of F. Scott Fitzgerald's late, Depression-era writing, and reflects on the notion of alienation, and on the enigmatic sensibilities of Kafka and Beckett."—Publishers Weekly

"Blending cultural history and literary biography with the barest traces of memoir, Dickstein has produced in his newest essay collection that rarest of species of literary criticism: one as genial to the general reader as to the academic."—Library Journal

"If Mr. Dickstein were a less intelligent critic, his book might be more aggressively polemical. As it is, what he offers is . . . a series of thoughtful studies. The book makes one envy Mr. Dickstein's students who get to be introduced to these writers . . . by a critic of such warm and varied sympathies. And even an experienced reader will make some new acquaintance in these pages."—Adam Kirsch, The New York Sun

"A particular strength of this volume is its deft combination of historical and formal reading practices; Dickinson brings together literature's social and aesthetic registers to produce insightful discussion of canonical authors. . . . A strong contribution to American literary criticism."—Choice

"Good news is at hand, and Morris Dickstein's new book is an example of it. He actually enjoys talking with us about literature, here mainly the novel."—Jeffrey Hart, National Review

"Dickstein wants to show that the real world counts, and suffuses fictions. . . . Weve learned . . . to see Stendhal better and to regard novels not so much as mirrors but as "prisms" with many facets that refract and refresh the world we know."—Jay Martin, Antioch Review

"This is a book by one of our best and most distinguished critics of American literature."—Norman Mailer

"Morris Dickstein's A Mirror in the Roadway is refreshing criticism, particularly in its contrast to our current chorus of Resentment. Like Edmund Wilson, his precursor, Dickstein favors realism and reality over theories of theories. Dickstein is admirable on Jewish writers (Kafka, Agnon, Bellow, Malamud, Philip Roth, Ozick) who in a sense are his true subject."—Harold Bloom

"Morris Dickstein gives the phrase 'the art of criticism' real meaning. He makes literature in writing about literature. His essays are rare birds. They only soar."—Roger Rosenblatt

"Morris Dickstein is one of the few critics who still can bridge, vigorously and engagingly, the gap between the academic world and the common reader. These essays are especially fine on American writing of the 1920's and 30's, exhibiting balanced judgment, insight, and a rich fund of knowledge about American literary and cultural history. One can apply to Dickstein a phrase he uses for Edmund Wilson—that he is able to apply a wide range of resources "to hold fast to the elusive human dimension of literature."—Robert Alter, University of California, Berkeley

"In arguing for an exuberant and dynamic notion of realism, Morris Dickstein reanimates a great and nearly vanished tradition of literary and cultural criticism that speaks to the common reader."—Ross Posnock, New York University

"Dickstein's essays are original, genially reflective and, at apt moments, invitingly autobiographical. He consistently shows himself to be a fair-minded but exacting critic who is not afraid to tell us what books are worth reading and why. His critical commentaries are saturated with the knowledge accumulated over years of attentive and sympathetic encounters with some of the most distinctive writers of modern American and European letters."—Maria DiBattista, Princeton University

"Morris Dickstein has neither theories nor hobbyhorses. His critical tools are the old fashioned ones: a vast range of reading, fellow feeling for the author he is discussing, and the urge to put the work in the context of the life. He is as illuminating about Cather as about Celine, as perceptive about Philip Roth as about Upton Sinclair."—Richard Rorty, Stanford University