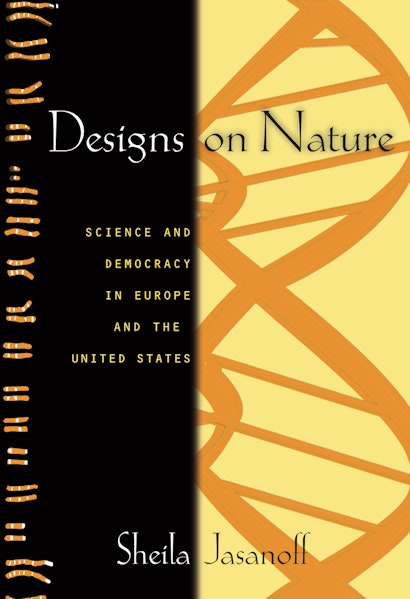 Biology and politics have converged today across much of the industrialized world. Debates about genetically modified organisms, cloning, stem cells, animal patenting, and new reproductive technologies crowd media headlines and policy agendas. Less noticed, but no less important, are the rifts that have appeared among leading Western nations about the right way to govern innovation in genetics and biotechnology. These significant differences in law and policy, and in ethical analysis, may in a globalizing world act as obstacles to free trade, scientific inquiry, and shared understandings of human dignity.


In this magisterial look at some twenty-five years of scientific and social development, Sheila Jasanoff compares the politics and policy of the life sciences in Britain, Germany, the United States, and in the European Union as a whole. She shows how public and private actors in each setting evaluated new manifestations of biotechnology and tried to reassure themselves about their safety.


Three main themes emerge. First, core concepts of democratic theory, such as citizenship, deliberation, and accountability, cannot be understood satisfactorily without taking on board the politics of science and technology. Second, in all three countries, policies for the life sciences have been incorporated into “nation-building” projects that seek to reimagine what the nation stands for. Third, political culture influences democratic politics, and it works through the institutionalized ways in which citizens understand and evaluate public knowledge. These three aspects of contemporary politics, Jasanoff argues, help account not only for policy divergences but also for the perceived legitimacy of state actions.

Sheila Jasanoff is Pforzheimer Professor of Science and Technology Studies at Harvard University's John F. Kennedy School of Government. Trained in law at Harvard Law School, she is the author of many books on the role of science and technology in the politics of modern democratic societies, including Science at the Bar, The Fifth Branch, and Risk Management and Political Culture.

"The book is worth reading. . . . Jasanoff's fascinating descriptions and explanations of the different interpretations and understandings of biotechnology regulation . . . provide an interesting perspective on the decisions for patenting higher life forms that have been made in each of the jurisdictions during the last 25 years."—Julian Kinderlerer, Science

"Sheila Jasanoff has written a carefully structured, ambitious and timely book . . . about the evolution of public policy on biotechnology over the past three decades in the United States, Germany, Britain and the European Union (EU). . . . She marshals her information carefully, using a comparative approach to illustrate how similar challenges to public policy-makers in these countries were handled differently, in ways that reflect long-standing differences in their political cultures."—Mark Cantley, Nature

"Sheila Jasanoff provides a refined and subtle comparative analysis of the ways in which policy decisions about red and green biotechnologies have been made in the United States, the EU, the United Kingdom, and Germany. She shows, with her mastery of detail and structure that the ways in which decisions are made about the pursuit of particular scientific research agendas and the development of types of technologies depend profoundly on the political cultures within which those decisions are made. . . . The analysis provided by Jasanoff in this scholarly and lucid study suggests that whatever the eventual outcome of the WTO dispute, the probability of institutional and policy convergence is slight, and that diversity may well be sustainable or even unavoidable."—Erik Millstone, Issues in Science & Technology

"Designs on Nature manages to communicate the results of sustained scholarship in a lively and engaging style, and should be required reading for anyone interested in the social dynamics of innovation."—James Wilsdon, Financial Times

"In Designs on Nature, Sheila Jasanoff presents an erudite challenge to the usual attempts to separate science from politics. . . . Scientists, as well as political decision makers, will find Designs on Nature an excellent introduction to the politics of science and technology. . . . The old idea that science and politics can be kept apart may still linger, but Jasanoff's account has removed any academic credibility for such a claim."—Alan Irwin and Kevin Jones, Nature Cell Biology

"Jasanoff offers her latest opus, a timely and welcome study that examines how the US, British, and German governments and people are struggling with several high-profile biotechnological innovations. . . . An engaging, well-referenced work."—Choice

"Jasanoff's book is well worth reading for any scientist involved in the emerging fields of biotechnology."—Elof Axel Carlson, Quarterly Review of Biology

"Jasonoff's book is an important and timely work, both substantively and theoretically. Those interested in biotechnology policies in any of the countries examined in this book will find an engaging and complete account of how they emerged and developed."—Betsi Beem, Australian Review of Public Affairs

"What makes the book worthwhile reading is . . . its diverse, comparative, and analytical viewpoint, elaborately and deeply embedded in an STS context. . . . Jasanoff's particular ability to establish comprehensive ties and link multiple levels and sites of science, technology, politics, and culture using strong argumentation might elevate Designs on Nature to a classic."—Monika Kurath, Science Studies

"Overall this book provides a generally readable, interesting account of the divergent ways in which the three countries considered have responded to developments in biotechnology."—Anne Chapman, Scientists for Global Responsibility Newsletter

"[Jasanoff's] contribution to the science and technology studies literature is undeniable. . . . Designs on Nature will be key reading for anyone interested in the geographies of science, a burgeoning area of study that has much to offer our understanding of international political and knowledge regimes."—Kerry Holden, Environment and Planning

"Readers interested in the concept of framing and its effects on international public debate and biotechnology regulation should read Sheila Jasanoff's Designs on Nature: Science and Democracy in Europe and the United States."—Carol Auer, BioScience

"Designs on Nature is a brilliant book that represents a major contribution to a vast and growing literature on biotechnology and bioethics. Professor Jasanoff tackles a complex topic with ease and humor that will appeal to students, scholars, and decision makers. There is nothing else available that comes close to her rich and detailed analysis."—Paulette Kurzer, University of Arizona, author of Markets and Moral Regulation

"Jasanoff provides an excellent guide to the public and political issues arising from biotechnology while also addressing the wider context of scientific governance and what has become known as the 'public understanding of science.' She makes a powerful and persuasive case both for the social and political significance of biotechnology and for a specific form of scholarly analysis that is both theoretically informed and empirically aware. Highly readable and very informative for those who have little background knowledge of these issues (and indeed for those with substantial background), this book will become the standard text on the political management of biotechnology and the politics of science and technology more broadly."—Alan Irwin, University of Liverpool, author of Sociology and the Environment and Citizen Science

"Using the interdisciplinary resources of Science and Technology Studies in an intellectually subtle, rigorous, and empirically sensitive way across three different national arenas, Sheila Jasanoff here provides an unequalled comparative perspective on the common yet differential struggles of modern political cultures and their institutions to get to grips with the challenges of controlling biological scientific knowledge practices in the public interest. She deftly exposes and insightfully explores the twin projects wherein modern scientific knowledge and its institutional and cultural contexts tacitly coproduce each other, whilst constructing the domains of scientific knowledge and cultural politics as if categorically distinct. A further key twist is provided by Jasanoff in the exposure of the tacit processes whereby policy and scientific institutions at the same time produce imagined idioms of their respective publics and democratic cultural arenas. This book offers crucial resources, and challenges, to several disciplines, notably political science, public law, anthropology, policy analysis and sociology—not to mention to the life sciences themselves."—Brian Wynne, Lancaster University