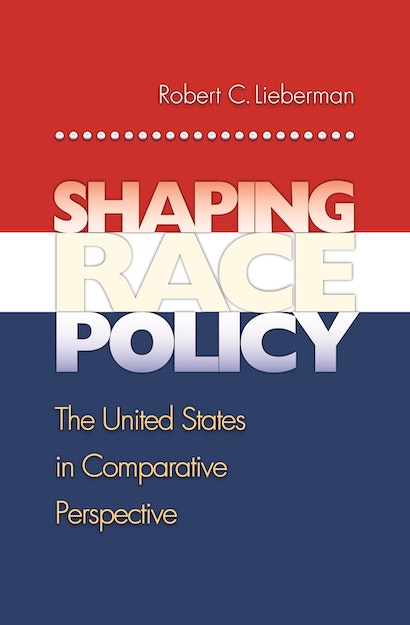 Shaping Race Policy investigates one of the most serious policy challenges facing the United States today: the stubborn persistence of racial inequality in the post-civil rights era. Unlike other books on the topic, it is comparative, examining American developments alongside parallel histories of race policy in Great Britain and France.


Focusing on on two key policy areas, welfare and employment, the book asks why America has had such uneven success at incorporating African Americans and other minorities into the full benefits of citizenship. Robert Lieberman explores the historical roots of racial incorporation in these policy areas over the course of the twentieth century and explains both the relative success of antidiscrimination policy and the failure of the American welfare state to address racial inequality. He chronicles the rise and resilience of affirmative action, including commentary on the recent University of Michigan affirmative action cases decided by the Supreme Court. He also shows how nominally color-blind policies can have racially biased effects, and challenges the common wisdom that color-blind policies are morally and politically superior and that race-conscious policies are merely second best.

Shaping Race Policy has two innovative features that distinguish it from other works in the area. First, it is comparative, examining American developments alongside parallel histories of race policy in Great Britain and France. Second, its argument merges ideas and institutions, which are usually considered separate and competing factors, into a comprehensive and integrated explanatory approach. The book highlights the importance of two factors — America’s distinctive political institutions and the characteristic American tension between race consciousness and color blindness — in accounting for the curious pattern of success and failure in American race policy.

Robert C. Lieberman is Associate Professor of Political Science and Public Affairs at Columbia University. He is the author of Shifting the Color Line: Race and the American Welfare State.

"Lieberman's book is well worth reading-and debating. . . . [T]his book sets its sights on a big, interesting question and tackles it. . . . It is a book that should open up significant space for debate and for future research."—Erik Bleich, Ethics and International Affairs

"This is a deep, wide, valuable book that demonstrably advances research in racial politics, comparative public policy, and the social science analysis of political history. That is an impressive achievement for one volume."—Jennifer L. Hochschild, Ethnic and Racial Studies

"How have and will we resolve the fundamental tension between our race consciousness and our color-blind ideals? Robert Lieberman breaks new and important ground in resolving this basic American dilemma, focusing on how shifting coalitions and tensions between ideas and institutions have produced varying welfare and discrimination policies, all richly informed by comparisons with French and British experience. The result helps us understand not only how we got to the current crossroads but also where we must aspire to head. We must all hope that the nation will learn the lessons Lieberman teaches."—Anthony W. Marx, President, Amherst College

"Shaping Race Policy advances existing scholarly discussion by bringing together issues normally only addressed by either country specialists or policy specialists. The book integrates these literatures and in the process provides a fresh account of how race—mediated through political institutions, patterns of group-state linkages and cultural patterns—has fashioned different political trajectories. Thoroughly researched, theoretically elegant, and persuasive, it is an outstanding exercise in comparative politics."—Desmond King, Nuffield College, Oxford University

"Robert Lieberman's Shaping Race Policy is a milestone in political science institutional theory. Though sociological approaches to the study of institutions and politics have brought cultural factors to the task, Lieberman's book is a major contribution in this effort for a full accounting of policy making and its variations. This analysis is thorough, eloquent—and timely."—John Skrentny, University of California, San Diego