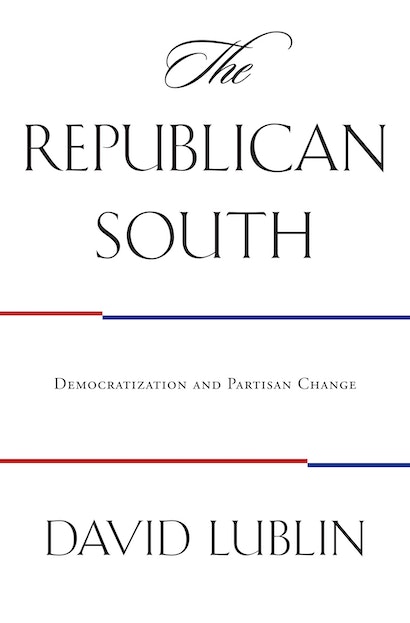 This comprehensive and in-depth look at southern politics in the United States challenges conventional notions about the rise of the Republican Party in the South. David Lublin argues that the evolution of southern politics must be seen as part of a process of democratization of the region’s politics. The Voting Rights Act of 1965 provided a sharp jolt forward in this process by greatly expanding the southern electorate.


Nevertheless, Democrats prevented Republicans from capitalizing rapidly on these changes. The overwhelming dominance of the region’s politics by Democrats and their frequent adoption of conservative positions made it difficult for the GOP to attract either candidates or voters in many contests. However, electoral rules and issues gradually propelled the Democrats to the Left and more conservative white voters and politicians into the arms of the Republican Party.


Surprisingly, despite the racial turmoil of the civil rights era, economic rather than racial issues first separated Democrats from Republicans. Only later did racial and social issues begin to rival economic questions as a source of partisan division and opportunity for Republican politicians.

David Lublin is Associate Professor of Government in the School of Public Affairs at American University. He is the author of The Paradox of Representation: Racial Gerrymandering and Minority Interests in Congress (Princeton).

"The democratization of Southern politics, coupled with economic issues rather than racial issues, best explains Republican ascendancy in the South over the past half century of gradual partisan change. So concludes David Lublin in his valuable study challenging the conventional presumption that GOP gains in the South are premised primarily on the politics of race. . . . The book is clearly written, well organized, and well documented."—Political Science Quarterly

"This is an important, knowledge-enhancing, subject-enriching work on a topic of major significance in understanding American politics: recent decades of Republican growth in the South. It adds to our understanding of realignment and political change more broadly by its detailed consideration of the state of the parties. Issues, elites, and institutions—an appropriately broad but rare range of topics—figure prominently in the discussion. While many contend racial attitudes realigned southern whites from the Democrats to the Republicans, David Lublin emphasizes economic and social issues while recognizing the place of racial issues."—Harold W. Stanley, Geurin-Pettus Distinguished Chair in American Politics and Political Economy, Southern Methodist University, author of Voter Mobilization and the Politics of Race

"This book offers a broad examination of factors relating to the development of the Republican party in the South, includes new and valuable data sets, and reflects what is now expected of David Lublin-his distinctive mixture of good social science, normative consideration, and commonsensical understanding of politics."—John H. Aldrich, author of Why Parties? The Origins and Transformation of Political Parties in America