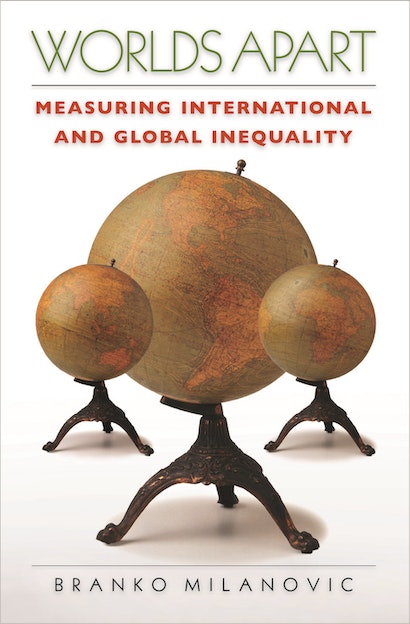 We are used to thinking about inequality within countries — about rich Americans versus poor Americans, for instance. But what about inequality between all citizens of the world? Worlds Apart addresses just how to measure global inequality among individuals, and shows that inequality is shaped by complex forces often working in different directions. Branko Milanovic, a top World Bank economist, analyzes income distribution worldwide using, for the first time, household survey data from more than 100 countries. He evenhandedly explains the main approaches to the problem, offers a more accurate way of measuring inequality among individuals, and discusses the relevant policies of first-world countries and nongovernmental organizations.


Inequality has increased between nations over the last half century (richer countries have generally grown faster than poorer countries). And yet the two most populous nations, China and India, have also grown fast. But over the past two decades inequality within countries has increased. As complex as reconciling these three data trends may be, it is clear: the inequality between the world’s individuals is staggering. At the turn of the twenty-first century, the richest 5 percent of people receive one-third of total global income, as much as the poorest 80 percent. While a few poor countries are catching up with the rich world, the differences between the richest and poorest individuals around the globe are huge and likely growing.

Branko Milanovic is Lead Economist in the World Bank research department, working on income inequality and poverty. The author of Income, Inequality, and Poverty during the Transition and the coauthor of Income and Influence: Social Policy in Emerging Market Economies, he is currently an associate scholar with the Carnegie Endowment for International Peace and a visiting professor at the School for Advanced International Studies, Johns Hopkins University.

"The history of world inequality is a fascinating subject, and Branko Milanovic's very readable book uses this as a backdrop to explain the problems of measuring inequality when we look across different countries. . . . [I]t is certainly an interesting read."—Huw Dixon, Times Higher Education Supplement

"A lead economist at the World Bank, Branko Milanovic has written probably the most comprehensive, thorough and balanced assessment yet of global inequality. . . . Milanovic makes a powerful and distressing argument for the intractability of inequality. His expertise and integrity inform every page."—Thomas Homer-Dixon, The Globe and Mail

"Branko Milanovic masterfully explores standard and new measures of income inequality among nations and among individuals, extraterritorially. . . . The work should be required reading for anyone involved in social and economic research and policy relating to income inequality worldwide."—Choice

"Worlds Apart offers a thorough description of relative inequalities in the world, and does so by setting research quality standards to which future studies should be held."—Camelia Minouiu, Ethics and International Affairs

"Worlds Apart is a real tour de force. It presents a new interpretation of trends in the distribution of income among the world's countries and individuals, and makes a strong argument that global income inequality can be and should be reduced. In this emerging issue area of international politics it will become a standard reference."—Robert Hunter Wade, London School of Economics

"Branko Milanovic's painstaking work takes us closest to a global understanding of income disparities at the present time. Among many other things, his work underscores that while national level income disparities are often obscene, international differences account for much more of the even more obscene level of global income inequality."—Jomo K. S., Assistant Secretary General for Economic Development, United Nations

"A fascinating read. This book is a helpful primer to help you find your way around the complex debates surrounding global inequality. It is also a forceful demonstration that the world economy remains much too unequal."—Dani Rodrik, Harvard University

"This is a very good book on a timely and much debated topic. Unlike many economists who write about global poverty and inequality, its author is genuinely open and fair-minded, exploring alternative ways of selecting and processing the available data so as to get robust results that make sense. Milanovic writes about economics in a way that is clear and engaging and fully accessible to nonspecialists, which is very rare indeed. This book has what it takes to be widely used in classrooms and among journalists, politicians, and diplomats."—Thomas Pogge, Columbia University and CAPPE, ANU