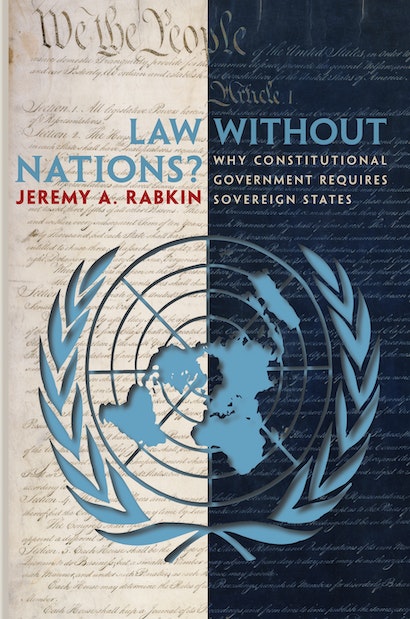 
Americans have long asked whether the United States should join forces with institutions such as the International Criminal Court and sign on to agreements like the Kyoto Protocol. Rabkin argues that the value of international agreements in such circumstances must be weighed against the threat they pose to liberties protected by strong national authority and institutions. He maintains that the protection of these liberties could be fatally weakened if we go too far in ceding authority to international institutions that might not be zealous in protecting the rights Americans deem important. Similarly, any cessation of authority might leave Americans far less attached to the resulting hybrid legal system than they now are to laws they can regard as their own.

Law without Nations? traces the traditional American wariness of international law to the basic principles of American thought and the broader traditions of liberal political thought on which the American Founders drew: only a sovereign state can make and enforce law in a reliable way, so only a sovereign state can reliably protect the rights of its citizens. It then contrasts the American experience with that of the European Union, showing the difficulties that can arise from efforts to merge national legal systems with supranational schemes. In practice, international human rights law generates a cloud of rhetoric that does little to secure human rights, and in fact, is at odds with American principles, Rabkin concludes.


A challenging and important contribution to the current debates about the meaning of multilateralism and international law, Law without Nations? will appeal to a broad cross-section of scholars in both the legal and political science arenas.

Jeremy A. Rabkin is Professor of Government at Cornell University, where he teaches courses on international law and American constitutional history.

"[A] forceful defense of the virtues of national sovereignty. . . . Law without Nations? is readable and persuasive."—Thomas Nagel, New Republic

"[A] learned and closely-argued book. . . . His argument is rich in scholarship, detail and nuance."—Peter Berkowitz, Policy Review

"Rabkin has skillfully and intrepidly outlined the main problems, including the dangerous embrace of 'soft law' and the hobbling of the right of states to self-defense. . . . [T]he present volume should be required reading."—Michla Pomerance, Azure

"Sovereign powers enable a state to provide essential services to its citizens, as for example: freedom to speak, choose, and elect, a lawful society, and national defense. But these sovereign powers of states have eroded in fact and in intellectual discourse. The time has long passed to push back. Dr. Rabkin does so in this important book."—George P. Shultz, Distinguished Fellow, Hoover Institution, Stanford University, and Secretary of State of the United States 1982-1989

"This timely book is a fine consideration of the principal conceptions of the new world order. Among its many virtues are that it etches clearly the content of both the pragmatic, unilateralist vision of the United States and the utopian and multilateralist vision of Europe. It then traces this conflict to fundamental differences in political philosophy and historical experience. A richly textured account, Law without Nations? is likely to have a broad audience of political scientists, international lawyers and diplomats."—John O. McGinnis, Northwestern University