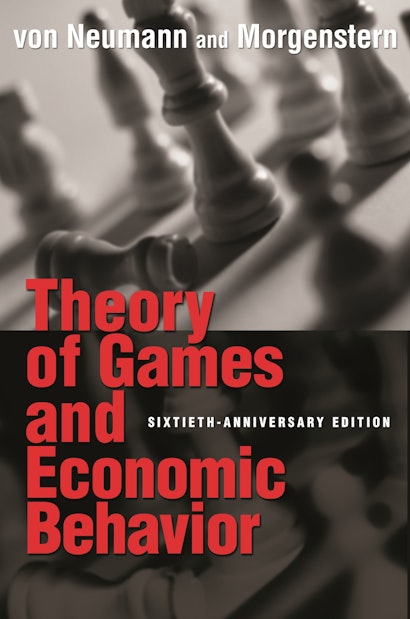 This is the classic work upon which modern-day game theory is based. What began more than sixty years ago as a modest proposal that a mathematician and an economist write a short paper together blossomed, in 1944, when Princeton University Press published Theory of Games and Economic Behavior. In it, John von Neumann and Oskar Morgenstern conceived a groundbreaking mathematical theory of economic and social organization, based on a theory of games of strategy. Not only would this revolutionize economics, but the entirely new field of scientific inquiry it yielded — game theory — has since been widely used to analyze a host of real-world phenomena from arms races to optimal policy choices of presidential candidates, from vaccination policy to major league baseball salary negotiations. And it is today established throughout both the social sciences and a wide range of other sciences.


This sixtieth anniversary edition includes not only the original text but also an introduction by Harold Kuhn, an afterword by Ariel Rubinstein, and reviews and articles on the book that appeared at the time of its original publication in the New York Times, tthe American Economic Review, and a variety of other publications. Together, these writings provide readers a matchless opportunity to more fully appreciate a work whose influence will yet resound for generations to come.

John von Neumann (1903-1957) was one of the greatest mathematicians of the twentieth century and a pioneering figure in computer science. A native of Hungary who held professorships in Germany, he was appointed Professor of Mathematics at the Institute for Advanced Study (IAS) in 1933. Later he worked on the Manhattan Project, helped develop the IAS computer, and was a consultant to IBM. An important influence on many fields of mathematics, he is the author of Functional Operators, Mathematical Foundations of Quantum Mechanics, and Continuous Geometry (all Princeton). Oskar Morgenstern (1902-1977) taught at the University of Vienna and directed the Austrian Institute of Business Cycle Research before settling in the United States in 1938. There he joined the faculty of Princeton University, eventually becoming a professor and from 1948 directing its econometric research program. He advised the United States government on a wide variety of subjects. Though most famous for the book he co-authored with von Neumann, Morgenstern was also widely known for his skepticism about economic measurement, as reflected in one of his many other books, On the Accuracy of Economic Observations (Princeton). Harold Kuhn is Professor Emeritus of Mathematical Economics at Princeton University. Ariel Rubinstein is Professor of Economics at Tel Aviv University and at New York University.

"Praise for Princeton's previous edition: "A rich and multifaceted work. . . . [S]ixty years later, the Theory of Games may indeed be viewed as one of the landmarks of twentieth-century social science.""—Robert J. Leonard, History of Political Economics

"Praise for Princeton's previous edition: "Opinions still vary on the success of the project to put economics on a sound mathematical footing, but game theory was eventually hugely influential, especially on mathematics and the study of automata. Every self-respecting library must have one.""—Mike Holderness, New Scientist

"While the jury is still out on the success or failure of game theory as an attempted palace coup within the economics community, few would deny that interest in the subject—as measured in numbers of journal page—is at or near an all-time high. For that reason alone, this handsome new edition of von Neumann and Morgenstern's still controversial classic should be welcomed by the entire research community."—James Case, SIAM News

"The main achievement of the book lies, more than in its concrete results, in its having introduced into economics the tools of modern logic and in using them with an astounding power of generalization."—The Journal of Political Economy

"One cannot but admire the audacity of vision, the perseverance in details, and the depth of thought displayed in almost every page of the book. . . . The appearance of a book of [this] calibre . . . is indeed a rare event."—The American Economic Review

"Posterity may regard this book as one of the major scientific achievements of the first half of the twentieth century. This will undoubtedly be the case if the authors have succeeded in establishing a new exact science—the science of economics. The foundation which they have laid is extremely promising."—The Bulletin of the American Mathematical Society