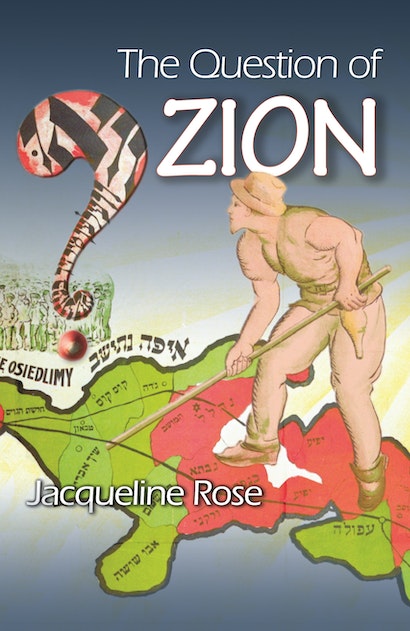 Zionism was inspired as a movement — one driven by the search for a homeland for the stateless and persecuted Jewish people. Yet it trampled the rights of the Arabs in Palestine. Today it has become so controversial that it defies understanding and trumps reasoned public debate. So argues prominent British writer Jacqueline Rose, who uses her political and psychoanalytic skills in this book to take an unprecedented look at Zionism — one of the most powerful ideologies of modern times.


Rose enters the inner world of the movement and asks a new set of questions. How did Zionism take shape as an identity? And why does it seem so immutable? Analyzing the messianic fervor of Zionism, she argues that it colors Israel’s most profound self-image to this day. Rose also explores the message of dissidents, who, while believing themselves the true Zionists, warned at the outset against the dangers of statehood for the Jewish people. She suggests that these dissidents were prescient in their recognition of the legitimate claims of the Palestinian Arabs. In fact, she writes, their thinking holds the knowledge the Jewish state needs today in order to transform itself.


In perhaps the most provocative part of her analysis, Rose proposes that the link between the Holocaust and the founding of the Jewish state, so often used to justify Israel’s policies, needs to be rethought in terms of the shame felt by the first leaders of the nation toward their own European history.


For anyone concerned with the conflict in Israel-Palestine, this timely book offers a unique understanding of Zionism as an unavoidable psychic and historical force.

Jacqueline Rose is Professor of English at Queen Mary University of London. She is the author of The Haunting of Sylvia Plath, States of Fantasy, the novel Albertine, and On Not Being Able to Sleep: Psychoanalysis in the Modern World (Princeton).

"[A] remarkable book. . . . Enormous amounts of news coverage and polemic are devoted to Israel, and the conflict in the Holy Land is the single most bitterly contentious struggle on earth. And yet, as Rose points out, little attention is given to the roots of the Zionist movement and the impassioned debates that once surrounded it. . . . Just what a strange creed Zionism was, and how unlike other nations its out-come, are part of Rose's theme."—Geoffrey Wheatcroft, New Statesman

"Jacqueline Rose has written a timely and courageous book. . . . It could do nothing but good if the force of Rose's argument were to be felt not only in and for Israel but beyond."—David Stimpson, London Review of Books

"Professor Rose's analysis . . . is modestly expressed and methodical. It is also fiercely intellectual. Judaic theology and psychoanalytic theory are wielded like tools, unpicking the minds of Israel's pioneers . . . to the Bible-bashing settlers currently resisting evacuation from Gaza to the West Bank."—Rafael Behr, The Observer

"[A]n original and provocative study, full of arresting insights, that deserves to be widely read in Israel and among diaspora Jews."—Rabbi David Goldberg, Jewish Chronicle

"In some of the most interesting passages of The Question of Zion, [Jacqueline Rose] offers a brilliant account of the psychopathological effects of the holocaust on 'the Israeli mind'. . . . Inspired by Rose's courage and generosity, our field should now engage with much less timidity with the issue of Palestine/Israel."—Bart Moore-Gilbert, Interventions: International Journal of Postcolonial Studies

"Rose's book has the merit of probing the problematic liaison in the Jewish state between nationalism and religion, on the one hand, and national myth and political reality, on the other. From the perspective of the study of her religion, her book challenges us to pay heed to the fundamental conceptual difference between (religious) redemption and (national) liberation."—Martina Urban, Journal of Religion

"Presents a revisionist appraisal of the complexities of the Arab-Israeli conflict and concludes that Israel is in danger of destroying itself."—Sheldon Kirshner, Canadian Jewish News

"Rose asks the right questions: is it possible to talk about the suffering of the Jewish people and the violence of the Israeli state in the same breadth? Why is criticism of Israel construed as a denial of the Jewish people's right to self-defense? Can any state act with impunity on grounds of self-defense? And finally, if part of the messianic view of world history is that 'it is part of the cosmic order of things that the nation must live on a knife's edge,' as her analysis suggests, is it possible for there to be peace?"—Cynthia Hoffman, Tikkun

"Jacqueline Rose proposes a suggestive analysis of a communal neurosis gripping Israel. Her examination . . . is topical and important."—Amos Elon, author of The Pity of It All: A Portrait of the German-Jewish Epoch, 1743-1933.

"I never thought it would be possible to articulate the psyche of Zionism without descending into superlatives or foul language. Jacqueline Rose has succeeded admirably where others have failed."—Ilan Pappe, Haifa University, author of A History of Modern Palestine: One Land, Two Peoples

"Jacqueline Rose speaks as a Jewish woman who deeply feels the traumatic pain of her people and because of that pain is anguished by the violence towards another people entailed in the Zionist project. While one may dispute her thesis that the source of this violence lies within the inner logic of the Zionist vision, one cannot ignore the moral urgency of the questions she raises with trenchant intelligence and a probing psychological insight."—Paul Mendes-Flohr, Divinity School, University of Chicago, and Director, The Franz Rosenzweig Research Center for German-Jewish Literature and Cultural History, The Hebrew University of Jerusalem

"This is a brilliant and highly original book on the mindset of modern Zionism and its principal progeny—the State of Israel. Jacqueline Rose is a formidable scholar with a writing style that is at once forceful and subtle. She offers—with intellectual honesty and fair-mindedness—new and very compelling explanations of the gap between the theory and practice of Zionism."—Avi Shlaim, Oxford University