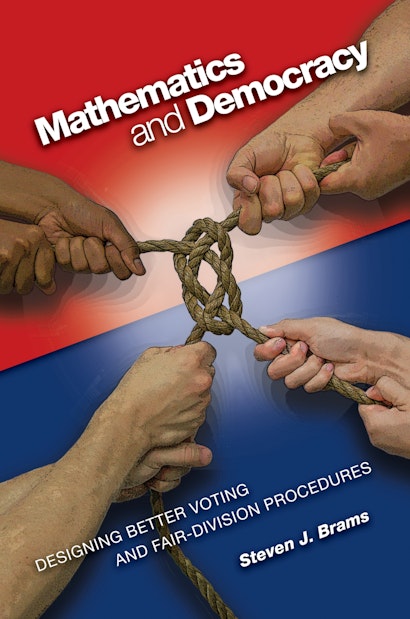 Voters today often desert a preferred candidate for a more viable second choice to avoid wasting their vote. Likewise, parties to a dispute often find themselves unable to agree on a fair division of contested goods. In Mathematics and Democracy, Steven Brams, a leading authority in the use of mathematics to design decision-making processes, shows how social-choice and game theory could make political and social institutions more democratic. Using mathematical analysis, he develops rigorous new procedures that enable voters to better express themselves and that allow disputants to divide goods more fairly.


One of the procedures that Brams proposes is “approval voting,” which allows voters to vote for as many candidates as they like or consider acceptable. There is no ranking, and the candidate with the most votes wins. The voter no longer has to consider whether a vote for a preferred but less popular candidate might be wasted. In the same vein, Brams puts forward new, more equitable procedures for resolving disputes over divisible and indivisible goods.

Steven J. Brams is professor of politics at New York University. He is the author of Theory of Moves, among many other books, and the coauthor of The Win-Win Solution: Guaranteeing Fair Shares to Everybody and Fair Division: From Cake-Cutting to Dispute Resolution.

"The image on the cover of Mathematics and Democracy shows four people pulling on two ropes. If they all pull, the knot will jam. The book's contents show, on the contrary, that sometimes mathematics and game theory can unjam the problems of voting."—Iain McLean, Science

"In seven chapters, Brams proposes and dissects a range of, often very elegant, fair division procedures pertaining to different situations. . . . Brams strengthens his arguments with a wealth of real-life examples, from US elections to the 1978 peace negotiations between Israel and Egypt. The mathematical results are amply illustrated with easy-to-follow examples. . . . If you're interested in democracy, then this book makes eye-opening reading, and if you're planning on wielding power at some point in the future, then it should be compulsory!"—Marianne Freiberger, +, Plus Magazine

"Increasingly, mathematicians are finding interesting problems in social science, a development that the previous books of Steven J. Brams helped to catalyze. Mathematics and Democracy, based on a selection of Brams's (mostly co-authored) papers, will add to his influence."—D. Marc Kilgour, Mathematical Reviews

"Since the math is elementary and the problems familiar, the book can be read both by political scientists not allergic to formal reasoning and by amateurs of mathematics interested in politics. Voting practitioners and designers will be delighted to find thorough discussions of less-known methods. All of them will find the book an interesting introduction to the fascinating subfield of mathematically oriented political science that analyzes and invents constructive institutional solutions to social dilemmas."—Marek Kaminski, Political Science Quarterly

"Professor Brams is one of the leading political scientists of our time, and one of the best-known authorities in the field of applied decision, game, and social choice theory. So, the level of expectations regarding his scholarly output is much higher than for most other authors. Yet, I believe this book surpasses that level."—Hannu Nurmi, University of Turku, Finland