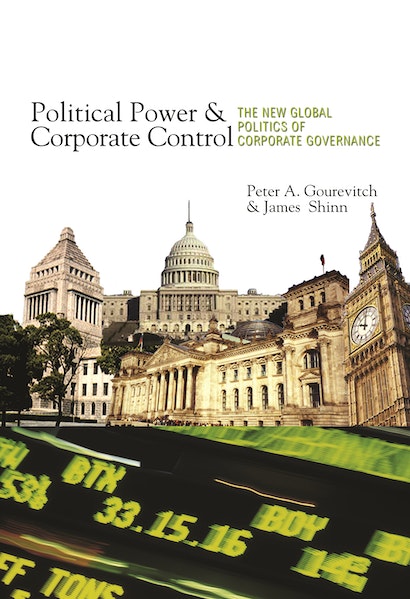 Why does corporate governance — front page news with the collapse of Enron, WorldCom, and Parmalat — vary so dramatically around the world? This book explains how politics shapes corporate governance — how managers, shareholders, and workers jockey for advantage in setting the rules by which companies are run, and for whom they are run. It combines a clear theoretical model on this political interaction, with statistical evidence from thirty-nine countries of Europe, Asia, Africa, and North and South America and detailed narratives of country cases.


This book differs sharply from most treatments by explaining differences in minority shareholder protections and ownership concentration among countries in terms of the interaction of economic preferences and political institutions. It explores in particular the crucial role of pension plans and financial intermediaries in shaping political preferences for different rules of corporate governance. The countries examined sort into two distinct groups: diffuse shareholding by external investors who pick a board that monitors the managers, and concentrated blockholding by insiders who monitor managers directly. Examining the political coalitions that form among or across management, owners, and workers, the authors find that certain coalitions encourage policies that promote diffuse shareholding, while other coalitions yield blockholding-oriented policies. Political institutions influence the probability of one coalition defeating another.

Peter A. Gourevitch is Professor of Political Science and founding Dean at the Graduate School of International Relations and Pacific Studies, University of California, San Diego. He is the author of Politics in Hard Times: Comparative Responses to International Economic Crises and former coeditor of International Organization. James Shinn Visiting Professor at Georgetown University's School of Foreign Service, where he teaches courses on technology and foreign policy. Previously he worked in the U.S. State Department's East Asia Bureau and was later a general manager, entrepreneur, and outside director for fifteen years in the high tech industry at various firms including Dialogic, which he cofounded.

"This is an exceptionally important book, meticulously researched and persuasively argued. It puts today's most pressing questions of corporate credibility and accountability in context, both historical and global. It is filled with information and insights of vital importance to anyone in the corporate world."—Nell Minow, The Corporate Library

"Gourevitch and Shinn conduct comparative analysis at its best, introducing cross-country quantitative analysis where that is possible and appropriate, but also offering analytical narratives on corporate governance, its likely origins, and the political and legal structures that support it in thirteen countries (mostly in Asia and Europe, but also including Chile and the United States). They combine superb conceptual clarity with informative detail."—Richard N. Cooper, Foreign Affairs

"A comprehensive examination of corporate governance."—Choice

"Peter Gourevitch and James Shinn brilliantly question the received wisdom about state regulation of corporate governance in this resolutely empirical and resolutely political book. They challenge arguments that countries can't change and that business dominates policymaking, showing that what determines a nation's regulatory system is the particular coalition that has emerged between workers, owners, and managers. This book should be required reading for students of corporate governance in the United States and beyond."—Frank Dobbin, Harvard University, author of Forging Industrial Policy: United States, Britain, and France in the Railway Age

"Peter Gourevtich and James Shinn are here onto one of the important inquiries of economic development today: To understand how the largest firms are run, why they are owned as they are in different nations, and what explains the variation-some nations with deep stock markets and some without. Much of the academic writing to date focuses on the economics of finance and the underlying legal structure. Get the law right, it's widely thought, and financial markets will flourish. Less attention has been paid to how, whether, and to what extent finance and law are both surrounded by a nation's politics; in short, why it sometimes is so hard to get the law right. Gourevitch and Shinn bring to bear on this subject today's thinking in political science, reaching closer to what seems to be where the basic causes of corporate governance variation around the world lie-not just in economics and law, but in political institutions and preferences."—Mark Roe, Harvard University, author of Strong Managers, Weak Owners: The Political Roots of American Corporate Finance and Political Determinants of Corporate Governance

"Many comparative corporate governance studies like to pit bank-based systems against market-based systems, or civil-law against common-law countries. Gourevitch and Shinn make a compelling case that the reality of corporate governance is much too rich and complex to fit into these simple categories. They paint a fascinating picture of the evolution of corporate governance in Asia, Europe, and North America as driven primarily by changing political coalitions and ideologies, pension reform, privatization, and globalization."—Patrick Bolton, Princeton University, coauthor of Contract Theory

"A major contribution by leading scholars of corporate governance, this book brings together insights from economics, political science and law. Highly recommended for anyone interested in the relationship between governance and development, it sheds helpful new light on the key debate about whether and how legal origin is destiny."—Simon Johnson, Sloan School of Management, Massachusetts Institute of Technology

"Political Power and Corporate Control is the first serious, book-length political science treatment of the two-way interaction between corporate form and politics. There is nothing comparable."—Merritt Fox, Michael E. Patterson Professor of Law, Columbia University School of Law