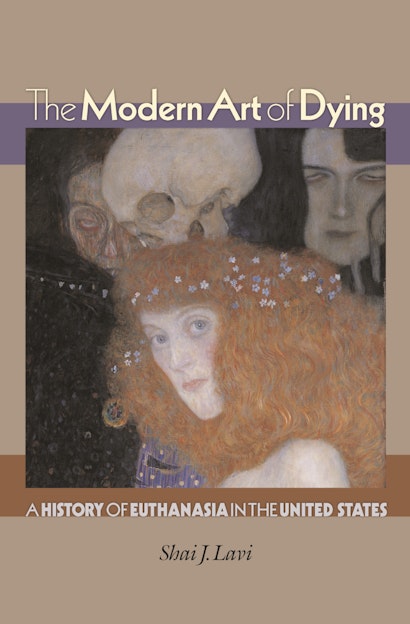 How we die reveals much about how we live. In this provocative book, Shai Lavi traces the history of euthanasia in the United States to show how changing attitudes toward death reflect new and troubling ways of experiencing pain, hope, and freedom.


Lavi begins with the historical meaning of euthanasia as signifying an “easeful death.” Over time, he shows, the term came to mean a death blessed by the grace of God, and later, medical hastening of death. Lavi illustrates these changes with compelling accounts of changes at the deathbed. He takes us from early nineteenth-century deathbeds governed by religion through the medicalization of death with the physician presiding over the deathbed, to the legalization of physician-assisted suicide.


Unlike previous books, which have focused on law and technique as explanations for the rise of euthanasia, this book asks why law and technique have come to play such a central role in the way we die. What is at stake in the modern way of dying is not human progress, but rather a fundamental change in the way we experience life in the face of death, Lavi argues. In attempting to gain control over death, he maintains, we may unintentionally have ceded control to policy makers and bio-scientific enterprises.

Shai J. Lavi teaches law and sociology at Tel-Aviv University. His research lies at the crossroads of culture, philosophy, and law.

"However we seek to achieve it, in the end what we most hope for is a good death. For his help in pushing us to think about what this means, Professor Lavi deserves our undying gratitude."—Joanna Reiver, Journal of Legal Medicine

"Lavi helped explain what the inhabitants of Christendom understood implicitly for centuries. He is right: We have forgotten how to die."—Michael A. Flannery, The Journal of American History

"Lavi explains how dying has moves from 'art' to 'technique,' from an experience overseen by a minister and family to one of 'technique' overseen by doctors and constructed by law.... Lavi's work represents the best of sociolegal scholarship: it is impressive for its clear conceptualization, its marshalling of an impressive array of historical and cultural evidence, and its lucid, clear, and elegant writing.... As a model of concerned and rigorous scholarship, Lavi's book is exemplary."—Alfonso Morales, Law & Society Review

"This book, The Modern Art of Dying: A History of Euthanasia in the United States provides valuable background information about the end of life, especially related to euthanasia. It provides comprehensive and extensive references and case histories of ways of dying and euthanasia, to the field of gerontology, and to those working with individuals of all ages in a terminal state. This book is geared for all the people who are interested in the issue of euthanasia. . . . This book is very valuable to Christian scholars. Also, readers with religious beliefs and legal systems which differ from those in the United States may find this book very resourceful in helping them to understand why euthanasia is such an important issue in American Judeo-Christian culture and law."—Suk-Young Kang, Ph.D., Journal of Social Work in End-of-Life and Palliative Care

"Lavi's book contributes to this ongoing discussion by providing a valuable, thoughtful, and concise history of euthanasia in the United States. His book takes us back to the 18th century Methodists, to see how 'the art of dying' gradually became 'technique.' He does a superb job of bringing together insights from several disciplines (history, religion, social science, law, philosophy) which help us to understand the issues involved by showing how art, technology, medicine, religion and social policy have contributed to the situation we find ourselves in today."—Bob Lane, Metapsychology Online Reviews

"Shai Lavi has enormously deepened the current argument over euthanasia by putting it in a perspective that has seldom entered the discussion, namely, its history. The genealogy of the idea and practices that have turned the art of dying into the technique of dying does not solve the current debate, but it does allow us to see it not just as an argument between ethicists, but as one about the cultural meaning of death. This book is essential for anyone who is concerned about euthanasia and has the potential of changing the very terms of the discussion."—Robert N. Bellah, University of California, Berkeley, coauthor of Habits of the Heart and The Good Society.

"How do we die? What do our ways of dying tell us about who we are and what kind of society we live in? Using the controversy over euthanasia to address these questions, Shai Lavi has written a theoretically sophisticated and persuasive book. Deftly combining historical argument and legal analysis, The Modern Art of Dying speaks to important ethical issues with great sensitivity and unusual subtlety. It exemplifies the best in interdisciplinary scholarship."—Austin Sarat, Amherst College, author of the forthcoming Mercy on Trial (Princeton)

"This book presents a subtle, nuanced investigation of the practice of euthanasia. It is a thoroughly researched study, relying on a variety of primary sources as well as keen historical instincts to tell a compelling, textured, and insightful story."—Gary Laderman, Emory College

"This is an outstanding book-beautifully crafted, extremely thoughtful, exceptionally well-organized and argued, and highly original. It's an important story and Lavi has organized it in a compelling, highly readable manner."—Sharon Kaufman, University of California, San Francisco.

"Shai Lavi has written a timely, insightful, and valuable book. Even those who have agitated for or against euthanasia and physician-assisted suicide rarely know the long history behind our current arguments. He does the necessary and invaluable work of a sociologist and historian: showing us the roots of our present debates. We are deeply influenced by them to this day."—Daniel Callahan, Director of International Programs, The Hastings Center