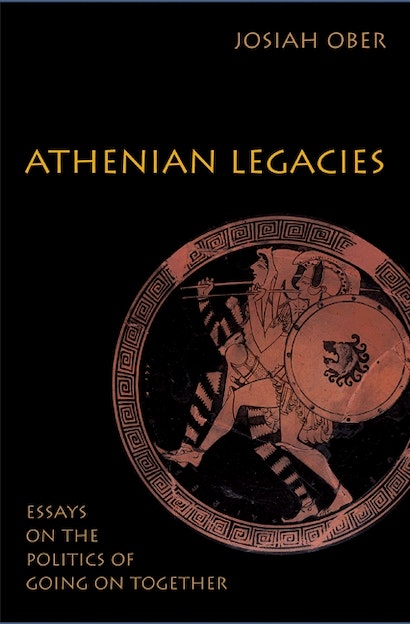 How do communities survive catastrophe? Using classical Athens as its case study, this book argues that if a democratic community is to survive over time, its people must choose to go on together. That choice often entails hardship and hard bargains. In good times, going on together presents few difficulties. But in the face of loss, disruption, and civil war, it requires tragic sacrifices and agonizing compromises.

Athenian Legacies demonstrates with flair and verve how the people of one influential political community rebuilt their democratic government, rewove their social fabric, and, through thick and thin, went on together. The book’s essays address amnesty, civic education, and institutional innovation in early Athens, a city that built and lost an empire while experiencing plague, war, economic trauma, and civil conflict.


As Ober vividly demonstrates, Athenians became adept at collective survival. They conjoined a cultural commitment to government by the people with new institutions that captured the social and technical knowledge of a diverse population to recover from revolution, foreign occupation, and the ravages of war. Ober provides insight into notorious instances of Athenian injustice, explaining why slaves, women, and foreign residents willingly risked their lives to support a regime in which they were systematically mistreated. He answers the question of why Socrates never left a city he said was badly governed.


At a time when social scientists debate the cultural grounding necessary to foster democracy, Athenian Legacies advances new arguments about the role of diversity and the relevance of shared understanding of the past in creating democracies that flourish when the going gets rough.

"[A] timely reminder of democracy's dynamic and creative potential for our deeply-divided and polarized American society, as it proceeds with hope and optimism into an uncertain democratic future."—Craige B. Champion, Classical Outlook

"By confronting critically an alien way of thinking and doing and speaking about politics that is nevertheless also the fountainhead of our own Western political tradition, Ober provides a wide range of readers with a truly unsettling and therefore properly educational experience."—Paul Cartledge, New England Classical Journal

"This is a rich collection; almost all readers will learn from most essays. Ober provides detailed accounts of Athenian culture while keeping his eye on larger themes."—George Klosko, Perspectives on Politics

"Josiah Ober's depth of knowledge on Athenian democracy is well-known, and his tenth book, Athenian Legacies, indicates that his reputation is well-deserved...Josiah Ober is to be congratulated on a magnificent achievement, a true tour de force of scholarship which develops a groundbreaking treatment of Athenian democracy and society."—Matthew P.J. Dillon, European Legacy

"This is a rich collection; almost all readers will learn something from most essays. Ober provides detailed accounts of Athenian culture while keeping his eye on larger themes.... [E]ngagement with Ober's essays will enrich their understanding of Athenian history and its relevance for contemporary concerns."—George Klosko, Perspectives on Politics

"This book is an inspiring achievement for both historians and citizens. A model of how to study antiquity, Athenian Legacies provides hope for the future of democratic practice and culture. It lays out clearly and concisely the political and ethical stakes of the discipline's questions and methodologies, fleshes out the conceptual content and stakes of Athenian institutions, and offers a theoretically rich picture not of how Athens came to be a democracy but of how it stayed a democracy."—Danielle Allen, University of Chicago

"Josiah Ober has a special skill of integrating historical studies with the large theoretical questions concerning the potentialities of a democratic regime. He does not imagine the simplistic imposition of ancient political practices in the contemporary world, but shows in imaginative ways the profound theoretical concerns that emerge from a careful investigation of the conditions and practices of ancient Athens in particular. The ancient world comes alive in Ober's works as a prism through which we can understand the current challenges of self-government."—Arlene W. Saxonhouse, University of Michigan