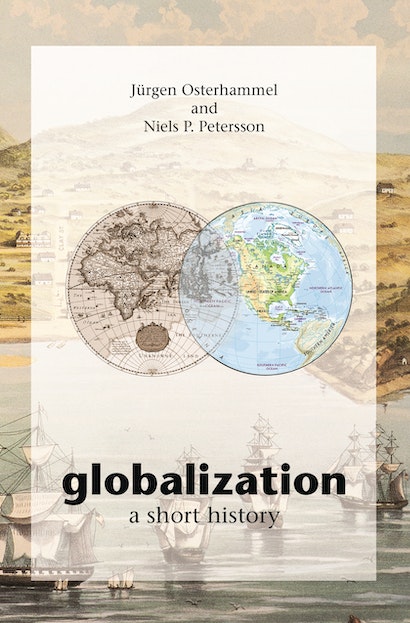 “Globalization” has become a popular buzzword for explaining today’s world. The expression achieved terminological stardom in the 1990s and was soon embraced by the general public and integrated into numerous languages.

But is this much-discussed phenomenon really an invention of modern times? In this work, Jürgen Osterhammel and Niels Petersson make the case that globalization is not so new, after all. Arguing that the world did not turn “global” overnight, the book traces the emergence of globalization over the past seven or eight centuries. In fact, the authors write, the phenomenon can be traced back to early modern large-scale trading, for example, the silk trade between China and the Mediterranean region, the shipping routes between the Arabian Peninsula and India, and the more frequently traveled caravan routes of the Near East and North Africa — all conduits for people, goods, coins, artwork, and ideas.

Osterhammel and Petersson argue that the period from 1750 to 1880 — an era characterized by the development of free trade and the long-distance impact of the industrial revolution — represented an important phase in the globalization phenomenon. Moreover, they demonstrate how globalization in the mid-twentieth century opened up the prospect of global destruction though nuclear war and ecological catastrophe. In the end, the authors write, today’s globalization is part of a long-running transformation and has not ushered in a “global age” radically different from anything that came before.

This book will appeal to historians, economists, and anyone in the social sciences who is interested in the historical emergence of globalization.

"Jürgen Osterhammel and Niels P. Petersson argue that . . . globalization has been long under way. While civilizations have always interacted, the stability and scale of western Europe's post-Columbian global networks of trade, migration, and cultural exchange differed qualitatively enough to count as the first stirrings of a globalization that continues to this day."—Choice

"[Globalization] stands out in the proliferation of textbooks and surveys on world history and globalization. It is a concise and, especially noteworthy, a precise essay on the time and place of globalization. . . . [T]his is a quick and intelligent little book."—Michael Geyer, H-Net

"[Osterhammel and Petersson] have produced a short and extremely helpful introduction to the history of globalization. . . . [The book] rightly tries to reach far beyond the more narrow confines of economic history . . . [to] draw on migration history, the history of slavery and of empires, and . . . international relations theory."—Harold James, International History Review

"This brief book provides an easy-to-read, well-organized addition to the globalization debate that offers a cogent analysis of the macroprocess by elucidating the long and uneven global developments that have brought us to the current era."—Colin Rowan, Journal of World History

"In this crisp account, two historians examine the long roots of globalization. . . . Scholars of world history will gain a great deal from this lucid, jargon-free analysis of globalization that is in many ways a most welcomed update of William H. McNeill's The Global Condition."—The Historian

"This excellent short book by German historians Jürgen Osterhammel and Niels P. Peteresson provides a fascinating, accessible sketch of the development of globalization. The authors bridge the gap between academic historians and general readers."—getAbstract

"Two German historians have very successfully put the phenomenon of globalization into historical perspective—and they are highly qualified to do so. There is no volume of similar length that brings together the historical experience of growing globalization so clearly and helpfully. An illuminating analysis for anyone interested in the current debate on this question."—V. R. Berghahn, Columbia University

"Full of original insights, this is the best introduction to global history on the market today. In little more than 100 pages, it aptly introduces readers to the big themes and questions that arise from global perspectives on the past. If you want to find out what the history of globalization is all about, and how globalization changes our view of the human past, read this book."—Sven Beckert, Harvard University