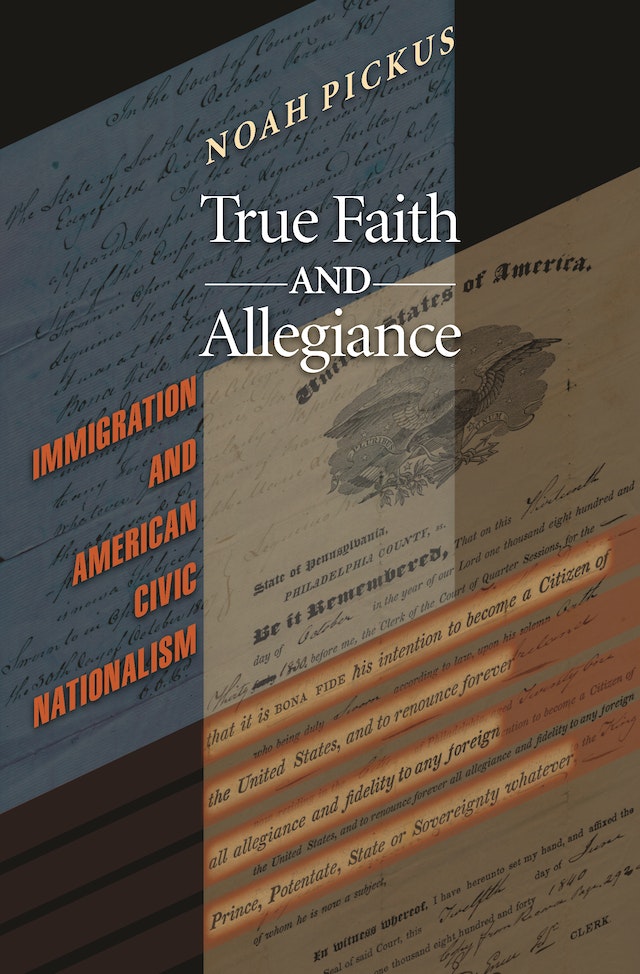 True Faith and Allegiance is a provocative account of nationalism and the politics of turning immigrants into citizens and Americans. Noah Pickus offers an alternative to the wild swings between emotionally fraught positions on immigration and citizenship of the past two decades. Drawing on political theory, history, and law, he argues for a renewed civic nationalism that melds principles and peoplehood.


This tradition of civic nationalism held sway at America’s founding and in the Progressive Era. Pickus explores how, from James Madison to Teddy Roosevelt, its proponents sought to combine reason and reverence and to balance inclusion and exclusion. He takes us through controversies over citizenship for blacks and the rights of aliens at the nation’s founding, examines the interplay of ideas and institutions in the Americanization movement in the 1910s and 1920s, and charts how both left and right promoted a policy of neglect toward immigrants and toward citizenship in the second half of the twentieth century.

True Faith and Allegiance shows that contemporary debates over a range of immigration and citizenship policies cannot be resolved by appeals to fixed notions of creed or culture, but require a supple civic nationalism that bridges the gap between immigrants’ needs and American principles and practices. It is critical reading for scholars, policy makers, and all who care about immigrants and about America.

Noah Pickus is Nannerl O. Keohane Director of the Kenan Institute for Ethics at Duke University. He teaches at Sanford Institute of Public Policy and is the editor of Immigration and Citizenship in the 21st Century.

"Pickus should be applauded for his centrist appeal to build bridges between natives and immigrants through English instruction and civics classes. Pickus' interpretation of recent developments in American immigration politics is also impeccable and a useful update to the current literature. It will strengthen the hand of those who dissent from the prevailing multicultural ethos of the universities, but will also challenge some of the more popular quick fixes of Congressional policy-makers. Put simply, this well-written book is a must-read for scholars of American national identity and immigration."—Eric Kaufman, Nations and Nationalism

"Noah Pickus rightly declares that it is time to get serious about assimilation in his insightful new book."—John Fonte, New York Post

"By carefully exploring the nuances of competing views of naturalization, Noah Pickus can help us all think more effectively about one of the pressing concerns of our time."—Andrew L. Aoki, Political Science Quarterly

"[This book] succeeds in provoking us to think harder about the appropriate role of government in the process of making Americans out of immigrants. And for that, scholars and citizens are in Pickus's debt."—Richard J. Ellis, American Historical Review

"In True Faith and Allegiance: Immigration and American Civic Nationalism, Noah Pickus presents a learned and balanced historical review of American political debates about immigration and citizenship from the 1780s to present."—Camille Pecastaing, The American Interest

"This book will be an important and original contribution to America's ongoing debate over immigration. It lays claim to some much-needed middle ground in a policy domain that is far too polarized. Ranging over political theory, law, and history, Noah Pickus wades into the most pressing public policy debates of our era. He manages to produce a work of policy analysis and political theory at the same time. The topic of citizenship has called out for such a treatment. Now it has one."—Peter Skerry, Boston College and the Brookings Institution, author of Counting on the Census? Race, Group, Identity, and the Evasion of Politics

"Noah Pickus offers a provocative account of American nationalism and the politics of immigrant incorporation. Claiming a centrist tradition that defies the familiar extremes on this issue, True Faith and Allegiance offers a sophisticated set of arguments that are sure to spark debate among scholars and political activists. It also represents an effective blending of political theory and policy analysis."—Daniel Tichenor, Rutgers University, author of Dividing Lines: The Politics of Immigration Control in America