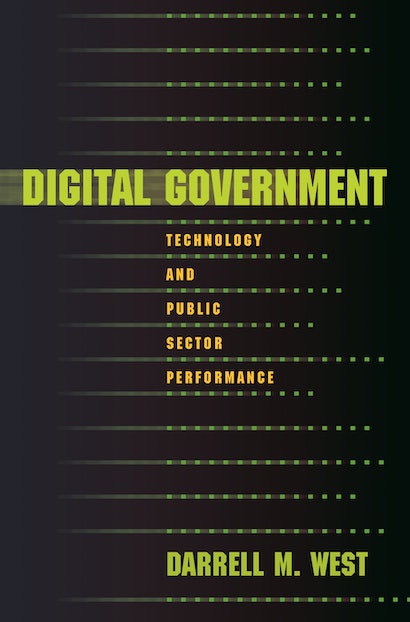 Few developments have had broader consequences for the public sector than the introduction of the Internet and digital technology. In this book, Darrell West discusses how new technology is altering governmental performance, the political process, and democracy itself by improving government responsiveness and increasing information available to citizens.


Using multiple methods — case studies, content analysis of over 17,000 government Web sites, public and bureaucrat opinion survey data, an e-mail responsiveness test, budget data, and aggregate analysis — the author presents the most comprehensive study of electronic government ever undertaken. Among other topics, he looks at how much change has taken place in the public sector, what determines the speed and breadth of e-government adoption, and what the consequences of digital technology are for the public sector.


Written in a clear and analytical manner, this book outlines the variety of factors that have restricted the ability of policy makers to make effective use of new technology. Although digital government offers the potential for revolutionary change, social, political, and economic forces constrain the scope of transformation and prevent government officials from realizing the full benefits of interactive technology.

Darrell M. West is the John Hazen White Professor of Political Science and Public Policy and Director of the Taubman Center for Public Policy at Brown University. He is the author of thirteen books, including Crosstalk: Citizens, Candidates, and the Media in a Presidential Campaign; Patrick Kennedy: The Rise to Power; Air Wars: Television Advertising in Election Campaigns, 1952-2000; and The Rise and Fall of the Media Establishment. His Web site, InsidePolitics.org, features in-depth research on electronic government at the city, state, national, and international levels.

"A comprehensive, detailed, survey of e-government practices, this book is a significant contribution to the field."—Stuart Bretschneider, Syracuse University

"This well-written book nicely blends the diffusion theory of technical innovations with the comprehensive nature of the evolution of e-government."—M. Jae Moon, Korea University and Texas A&M University

"I've seen no other work that brings together this much empirical evidence on the general trend of government agencies' adoption of IT for their services."—Eszter Hargittai, Northwestern University.