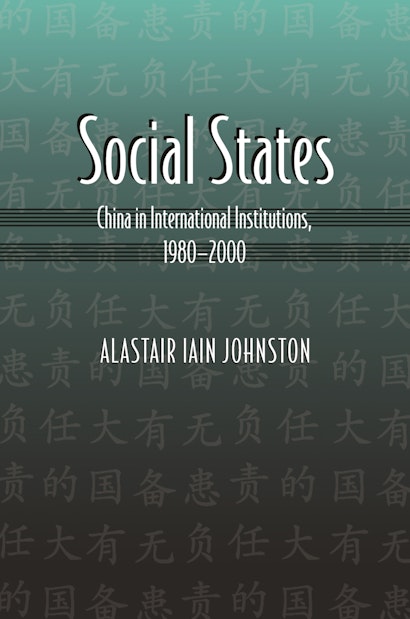 “Constructive engagement” became a catchphrase under the Clinton administration for America’s reinvigorated efforts to pull China firmly into the international community as a responsible player, one that abides by widely accepted norms. Skeptics questioned the effectiveness of this policy and those that followed. But how is such socialization supposed to work in the first place? This has never been all that clear, whether practiced by the Association of South East Asian Nations (ASEAN), Japan, or the United States.

Social States is the first book to systematically test the effects of socialization in international relations — to help explain why players on the world stage may be moved to cooperate when doing so is not in their material power interests. Alastair Iain Johnston carries out his groundbreaking theoretical task through a richly detailed look at China’s participation in international security institutions during two crucial decades of the “rise of China,” from 1980 to 2000. Drawing on sociology and social psychology, this book examines three microprocesses of socialization — mimicking, social influence, and persuasion — as they have played out in the attitudes of Chinese diplomats active in the Conference on Disarmament, the Comprehensive Nuclear Test Ban, the Convention on Conventional Weapons, and the ASEAN Regional Forum. Among the key conclusions: Chinese officials in the post-Mao era adopted more cooperative and more self-constraining commitments to arms control and disarmament treaties, thanks to their increasing social interactions in international security institutions.

"What is the process by which norms in the international system change the behavior of states? Johnston wants to identify the working parts of the causal mechanism. But rather than emphasizing pressure from other states or changing strategic interests to explain decisions to join security regimes, Johnston focuses on the social learning that takes place when policymakers interact with representatives of other states."—Andrew J. Nathan, Foreign Affairs

"Johnston offers his arguments in a very cautious way, with meticulous care given to theory and methodology, thereby setting a standard that is rarely found in the current body of literature on the subject. . . . Johnston has certainly published an excellent book, that shows how cutting-edge research can be conducted by exploring in great depth an inter-disciplinary area to help shed new light on Chinese foreign policy. The book's narrow focus on security institutions makes it well-defined; we may hope that Johnston will find it worthwhile to go beyond this in future work."—Gerald Chan, The China Journal

"This book is most significant for theoretical, empirical, and political reasons. Theoretically, it explores in detail micromechanisms of socialization, moving way beyond the traditional rationalist-constructivist divide. Empirically, the book demonstrates that even China changes through socialization in international institutions. The political conclusions are obvious: Keep socializing China rather than balancing!"—Thomas Risse, Freie Universität Berlin

"This eagerly awaited book offers the most compelling analysis for China's 'peaceful rise' that I know of. Iain Johnston displays a complete mastery of international relations theory, a profound knowledge of Chinese foreign policy and East Asian regionalism, and impressive control over modern social science methods. For many years to come this will be the landmark study of one of the most important developments in contemporary world politics."—Peter J. Katzenstein, Cornell University

"This is a timely, compelling, and deeply impressive piece of scholarship by one of the very best world-class international scholars writing on Chinese foreign policy and international relations theory today. The vividness of the writing, combined with coherent organization and dispassionate empirical analysis, are certain to make this an essential work for seasoned China watchers. At the same time, the book's bold and analytically arresting observations will compel policymakers to question their personal assumptions and hidden prejudices."—Samuel Kim, Columbia University

"In his latest first-rate work, Iain Johnston argues that, over the past twenty years, China has been socialized—often without side payments and at the expense of its narrow security interests—to be a more cooperative partner in international relations. His argument will be widely read and is sure to provoke the critics— but it is too carefully conceived and documented to dismiss."—Jeffrey W. Legro, University of Virginia