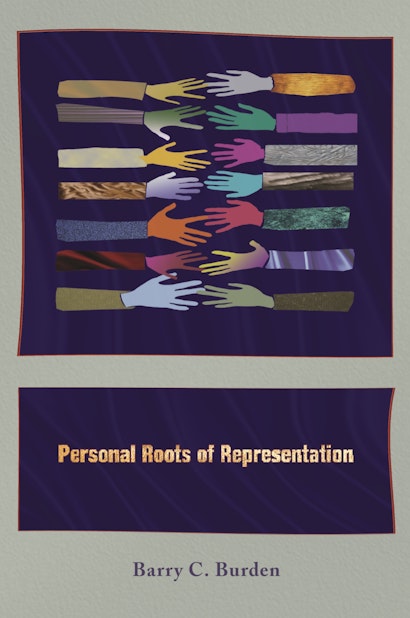 Despite heightened partisanship in the U.S. Congress and constituencies split along ideological lines, congressional representatives frequently buck their parties and seldom do precisely what voters ask. In Personal Roots of Representation, Barry Burden challenges standard explanations of legislative preferences to emphasize the important role that personal influences play in representatives’ voting behavior.


This timely book is the first to examine the extent to which the very same values, experiences, and interests that shape congressional members as individuals and guide their own life choices similarly shape their policymaking decisions. Burden takes a close look at legislative decision making in the areas of tobacco regulation, vouchers and school choice, and religion and bioethics. He finds that personal factors become more significant when legislators are acting proactively rather than reactively, grappling with specific policy issues, and defending rather than challenging the status quo. Marshaling both qualitative and quantitative evidence, Burden reveals that the personal roots of representatives’ actions can be as influential as the usual suspects of partisanship and constituency — and that personal factors quite often have the greatest impact when the policymaking stakes are at their highest.

Personal Roots of Representation is a provocative book that raises pressing new questions about legislative discretion and the accountability of our elected officials.

Barry C. Burden is professor of political science at the University of Wisconsin-Madison. He is the coauthor of Why Americans Split Their Tickets and the editor of Uncertainty in American Politics.

"Burden has written an important book. He argues that the policy preferences of members of Congress are not necessarily determined by the preferences of their constituents and a member's desire to be reelected, but also by their personal beliefs and experiences."—S.Q. Kelly, Choice

"This is an impressive work. Burden's argument that ideology is important, but is not everything, is compelling. It does not tear down what we know but rather builds on the existing literature with a new take. What he gives us—that some issues may not reflect the standard left-right continuum, and that legislators' personal experiences and values come into play here—is both highly original and very important."—Eric M. Uslaner, University of Maryland

"This book represents a major contribution to the study of legislative politics. Its purpose is to explore how legislators are influenced by their own personal backgrounds and experiences as they go about their legislative activities, including roll-call voting, floor speeches, and cosponsoring legislation. It will be widely read by legislative scholars and will influence how they think about the determinants of legislative behavior."—James Garand, Louisiana State University