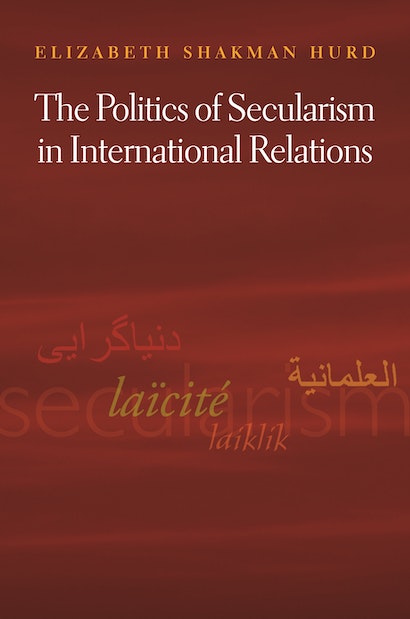 Conflicts involving religion have returned to the forefront of international relations. And yet political scientists and policymakers have continued to assume that religion has long been privatized in the West. This secularist assumption ignores the contestation surrounding the category of the “secular” in international politics. The Politics of Secularism in International Relations shows why this thinking is flawed, and provides a powerful alternative.


Elizabeth Shakman Hurd argues that secularist divisions between religion and politics are not fixed, as commonly assumed, but socially and historically constructed. Examining the philosophical and historical legacy of the secularist traditions that shape European and American approaches to global politics, she shows why this matters for contemporary international relations, and in particular for two critical relationships: the United States and Iran, and the European Union and Turkey.

The Politics of Secularism in International Relations develops a new approach to religion and international relations that challenges realist, liberal, and constructivist assumptions that religion has been excluded from politics in the West. The first book to consider secularism as a form of political authority in its own right, it describes two forms of secularism and their far-reaching global consequences.

"This book is a timely and sobering discussion of important theoretical, as well as practical, issues of IR theorizing and how religion relates to politics in general. It is a first-rate read and can be recommended to all scholars interested in the interplay of religion and politics."—Ragnhild Nordås, Journal of Peace Research

"Hurd has produced a timely and compelling book that will be of interest to a wide range of scholars well beyond the discipline of international relations theory."—Dianne Kirby, H-Net Reviews

"Hurd's study deserves praise for its original slant on the role of secularism in international relations. Its rich and well-written discussion in both case studies will also attract academics in related areas."—Hakki Tas, Political Studies Review

"[T]his is a useful and provocative work that should be read carefully. Its analysis should be applied to other contexts, because without an adequate understanding of religion—or even of our own misconceptions about religion—we will continue to mismanage our relations with states and communities shaped in part by faith identities."—John Anderson, International Affairs

"There is much to like about this exhaustively researched book. Its innovative argument calls on those who study the relationship of religion to international relations to rethink how they view their subject at the most fundamental level. I would recommend it to anyone doing research in this field, especially those working on the responses of the West to political Islam."—Patrick Callahan, Journal of Politics and Religion

"A highly sophisticated, original, sobering (as opposed to saber-rattling) intervention into the debate on religion and world affairs. International relations theorists have tended to reduce the study of religion to either religious organizations, sometimes understood as moralizing interest groups or as terrorist organizations, or to generic principles that are synonymous with international norms. By investigating different lived and historically shifting conceptions of the secular in different cultural contexts, Hurd provides an original path for understanding the role of religion in modern international affairs."—Michael Barnett, University of Minnesota

"Elizabeth Shakman Hurd has written an incisive and imaginative book that packs a big theoretical punch. Varieties of secularisms in the plural, not secularism in the singular, define contemporary world politics. The relations between the United States and Iran and Europe and Turkey offer the author politically important grounds on which she develops her compelling argument. Among a small list of books on religion and international politics, this is a standout."—Peter J. Katzenstein, Cornell University

Assumptions about the secular organization of public life have sunk deeply into the structure of the academy in general and international relations theory in particular. Elizabeth Hurd excavates and challenges those assumptions; in doing so she opens the door to new developments in global theory and politics. Her comparisons between Euro-American secularism and the politics of Turkey and Iran are particularly apt."—William E. Connolly, author of Pluralism

"This book is, first of all, provocative. Its edgy, gutsy argument takes on the very foundations of international relations theory. Second, it is persuasive, with its claims made admirably clear from the outset and defended throughout. Third, it is pertinent. Religion is rapidly becoming an important part of international relations, and the choice of case studies dealing with Islam in particular will propel this book right into the center of contemporary debates. Clearly and compellingly written, the book is, moreover, accessible to a large intellectual audience."—Daniel Philpott, University of Notre Dame